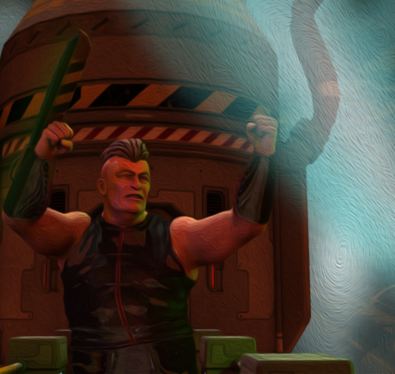 This is the final part of Genejoke's epic on creating 3D Comics.


This will be the final part as there are definite limits to what can be conveyed just through the written word. I will start a video tutorial series in the new year which will go much more in depth.


By this point you have your characters, set and are ready to render… Or are you? Like anything else lighting can make a huge difference. Be it to convey mood or to help set scene.


As mentioned before Daz studio has two render engines and which of those you use will affect how you approach lighting. Essentially, everything you may know about lighting from traditional art or photography still applies, it's just a matter of learning to apply it.


With the 3Delight renderer in use there are no lights in the scene to start and if rendered like that it will give a fairly flat looking render. You can add in any number of lights, these fall into a few categories. Distant light, fairly self explanatory. As are spot lights. There are also Point lights which are handy for candles. Each light will have it's own settings in the parameters tab and by default shadows are switched off. In the parameters tab you can change the colour and intensity of the lights and select shadow type. The shadow types are ray traced or deep shadow maps. The difference is that ray tracing follows the line of sight from the light source to calculate the shadows where as shadow maps generate a map where shadows will fall but with a set resolution. What does that even mean? Well ray tracing will give a better look and has more settings, however often takes longer to render. The deep shadow map tends to be less impressive when it comes to reflections and opacity as well. I would recommend experimenting and getting a feel for which works best for your needs.


Iray the scene will be lit by default. In render settings under environment there are time of day and year sliders and changing these does exactly what you'd expect. This is great for out door scenes as it creates some decent renders with little effort.
Iray can also add distant, spot and point lights but the settings are a bit different.


It's worth noting that if you have a single light source there (particularly in 3delight) won't be any ambient light so you models will be lit and shadows will be very dark. As a result you'll need to add other lights in. If you're not familiar with 3 point lighting I recommend looking it up. It's a simple concept and easy to find tutorials on it and it doesn't need to be specific to 3d software as the core principles are the same.


Once you have you scene lit and camera positioned you might want to look at camera settings. You can use things like depth of field and the like to greatly improve your renders. This is something I'll go further into on the video series.


The rendering can sound like a simple step, but has its own set of complexities. Many of which will mostly be set by the time you get to the rendering stage. For many comic panels the default settings should be sufficient, but there are a wealth of settings to play with. For example changing the sample rate can improve the image quality but will also massively increase render time. With making comics and several renders per page you may not want to make that trade off.


How long does a render take? How long is a piece of string? The scene in question and render settings can change it dramatically. For my comics it's usually between two and twenty minutes but more complex scenes with a lot of complex shadows and transparency maps can he nearer an hour. In some cases maybe even two.
For example rendering a forest scene where it has to render shadows of thousands of leaves will take much longer than a render of a city street.


That's where I'll end this series, but as mentioned there is a video series coming in the new year. I hope that if you have any passing interest in 3D rendered comics this gives you a some insight into the process of making them.


Many thanks to Genejoke for creating all these tutorials! Visit him and his many comics here on the Duck:

Thanks for the guidance Gene