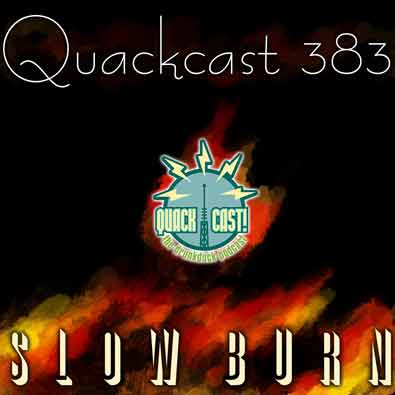 The idea for this Quackcast came from a rant by the irascible PitFace. She was talking about how there's a trend in modern SciFi and horror movies to bash you over the head with constant action and it doesn't allow you time to relax and take in the story, you're just bounced from one relentless scene to the next. In the biggest classics of the genre like Alien, Ghost in the Shell (animated 90's version) or Blade Runner they DO allow the viewer slow moments of reflection and it helps to make the action feel more intense by contrast as well as allowing the viewer time to assimilate and understand all the ideas and themes they've been presented with so far.

This applies to comics of course! We call it a “decompressed” storyline. Banes asserts that's a negative term but I see it as neutral, “slow burn” is another term (The more compressed a story is the faster the action happens). If you take things too far and extend out your “slow moments” then you'll just make your audience bored as they wait around for something to happen, so be careful of that! Don't drown them in action, but don't bore them to tears either.

One of my favourite things about slow moments in films and comics is that it allows you to look down side-paths and to get to know the characters and their world a bit better, which helps with immersion (suspension of disbelief). In a lot of TV and movie DVD commentaries you'll hear directors talk about how they cut out this or that scene because it didn't help “advance the plot” while you as a viewer internally scream because you realise that it would have filled out the story so much better and help you understand the characters more.

Basically, a story should NOT always be beholden to the plot as the main driving force. Characters are what people generally fall in love with, this is especially important with long form webcomics! Don't be afraid of having slow moments.

Gunwallace gave us a lovely theme to Stop Watchers. It’s tiiiime to go! No time to great ready, just head straight for the door, you’ve dilly-dallied around enough already. It’s down to the crunch now. Get going. Now, now, now, now NOW!!!

The Hobbit movies are a huge ball of suck.

HAHAHA! It was the star of the movie.