A Trilogy in Reverse 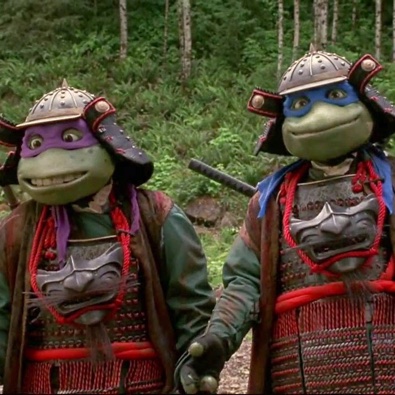 I spent the weekend doing something I have wanted to do for quite sometime: having a midnight pizza party while watching the early 1990s Teenage Mutant Ninja Turtle movies with the Jim Henson turtle costumes. Yes, the turtles were a thing when Vanilla Ice was still household name, but what other franchise could sell green ooze filled pies to children with the tagline, “Fresh from the Sewers to You”?

One criticism people have about trilogies is that the second film or even third has a difficult time competing with the original. Sometimes, the third installment is the strongest of the three films (Lord of the Rings: The Return of the King earned more Oscars than The Fellowship of the Ring and The Two Towers combined.) In the case of the Teenage Mutant Ninja Turtles I/II/III films, it might be best to watch them in the reverse order so they get progressively better overtime.

Here were noticeable characteristics I picked up in order from the older film to the more recent ones:

The first film showcased martial arts skill with additional weapons. Some people complained and said the use of weapons and martial arts was way too violent for the young audience that was watching. By the later movies, weapons were adapted to a yo-yo or even very slapstick cheap shots that did not even involve hand to hand combat.

In the first film, one of the turtles (Raphael) repeatedly used the word “damn”, much to the dismay of parents in the audience. The language was more kid-friendly in the later films, however, the word “bummer” had to be censored from audiences in the UK.

The first film was very motivated to reach a true moviegoer's expectations. The plot had many layers: one of the turtles rebels and is separated from his brothers; a teenager runs away from home and joins a street gang in exchange for a walkman; (the turtles home is destroyed and they must find a new home in a country side; the mentor of the turtles faces against an old nemesis. I can say, for what it's worth, the first Ninja Turtles movie was a great film. The plot of the later movies dwindle quite a bit and I was left figuring out the overall conflict in Turtles in Time.

LotR:Return of the King didn't win Oscars because it was a better movie. It was even slower paced and with more silly fight scenes than the other two, but since those movies had been awarded next to nothing the Academy felt it had to give the franchise something. In NZ almost every household has a DVD copy of the trilogy. Buying it was almost a patriotic thing to do. It is often called the most owned and least watched box set in the country. By the time the Hobbit films came out we were mostly over supporting 'kiwi' films ... especially when our government changed employment law at the behest of Warner Bros to allow them to exploit workers (search "The Hobbit Law" ... https://www.newsroom.co.nz/2018/01/29/78965/the-hobbit-law-there-and-back-again).

The new movies were horrendous!! I don't even group them with the early nineties ones. First, the turtles are ugly and the latest one brought back every single major villain for the turtles to fight and it was still painful to watch.

Nice post! I remember watching all three movies in theaters. I loved the cartoons and I was surprised about how the movies are more "mature" but enjoyed them anyway (I was like 8-10 years old at that time). After some years I discovered the comics and my mind literally exploded... Violence and blood everywhere. The new movies? No, thank you!

Better off watching Battle Girls: Time Paradox. Awful but its take on the leaders of the Warring Era is interesting and surprisingly true to some accounts.

I only knew there was a 3 because they went back to Medieval Japan and that was the only point of interest. The rest was totally forgettable.