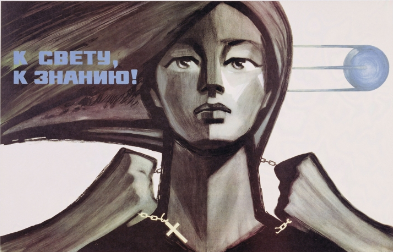 From the most ancient times, art has always been used by the ruling classes for purposes of propaganda, to propagate certain ideas about those commissioning it and their purposes: that kings are mighty, that regimes are for ever, that the enemy is vile, or perverted, or disgusting, or a pushover.

Art has also been used since forever to propagate ideas- from the terrible jew to the terrible impact of war, the most ubiquitous and visceral medium of getting the message across has been art.

There's no question as to why that is- you don't need to be literate to engage with an art piece. You don't need to be even aware of the context as much. Art is in a very big way pure emotion, and emotion is a universal language that can (and often does) bypass the filter of preconceptions, prejudice or even critical thought, at least initially. It goes without say that those that want to touch upon the heartstrings- in any way that spans the gamut- will employ art to do it.

Today is no different. Art is still being used to propagate agendas, political and social positions and a vast array of messages about human behavior, how we should think, react and even feel.

And this is fine. This is part of the forum of human interaction.

This is a terrible route to take in the art forum- dismissing someone's unsavoury opinion (basically anything that isn't an accolade) by labeling them anti-something and attacking them on that (unfounded) premise is a recipe for stagnation. Stagnation in the very art one is producing, in the way one conveys the message they want, in the way one develops as an artist and a political entity.

Unfortunately what I tend to see in mainstream art, especially cartoons that are reimaginings of older classic cartoons, such as She-Ra and Thundercats, is exactly this. Legitimate art-oriented feedback being thrown out the window with the trash after being labeled ‘anti-progressive’ in some shape or form. Hoards of people clash over whether they're progressive or non progressive only on the basis of whether they like a sketch, a cartoon or a premise for a cartoon.

It seems to me that this procedure produces two effects: censorship and conformity. Comics and cartoons tend to fall into very strict and very similar guidelines for how they should look stylistically and what they should thematically contain. Anyone who doesn't like it or would like some other iteration, take or spin on what is being presented must keep silent or risk being harrassed and labeled. And in turn this causes polarization, in two ‘sides’ to art that exist only to be polemic and spiteful to the other, rejectful of the other and absolutely refusing to work together to create a fusion of ideas that will produce something new and refreshing.

But that would mean that art would not only be created as a means to propaganda, as it seems to be the case in mainstream art media in 2018; it would also be created for the sake of art itself.

GET YOUR #TWITTER_FEATURE! BOOK YOUR SUNDAY NOW, PQ ME!

There's a whole new language for shows like that now and the new She-ra reflects that. Gulp! She-ra has gone anime. Now if they had kept her like the original they could have done a Cutey Honey/Adult Swim kind of thing--- maybe with some help from the folks at Robot Chicken. Now that would have been fun.

As for the twits tweeting about She-ra, the best had to come from the guy who co-created it; J. Michael Straczynski. He basically said all the people read too much into it and it meant nothing like what they were saying. It was supposed to be a strong female character with a sword. Sort of like Ivanova from Babylon 5. And as we all know rule #1: Ivanova is always right. The re-design is obvious if you know anything about anime tropes. She-ra has become a magical girl. The look is like the characters from any number of magical girl shows. She's supposed to look pre-adolescent not necessarily "boyish" The shorts are all about avoiding the panty shots magical girls in short skirts always have. But most of the people discussing it had no conception of that or the tropes being brought into the series now. Tropes that weren't in the lexicon when the original was created. You should compare her now to the characters in Fate: Prisma Illya or Fate: Stay Night or Sailor Moon.

I went to an exhibit of abstract art and the wonderful guide there pointed to one evocative piece and said "The artist said that whatever meaning you put into it you brought with you. He did not put it there." Changed how I saw a lot of art.

People read too much into things and over-complicate artistic expression. It's done in literary works too, seeking all kinds of symbolism and meaning regardless of what the author intended. If someone draws pictures of trees, you'd get masses supporting the art as promoting a green lifestyle and others calling it an attack on progress and technology -- when maybe the artist just likes drawing trees.