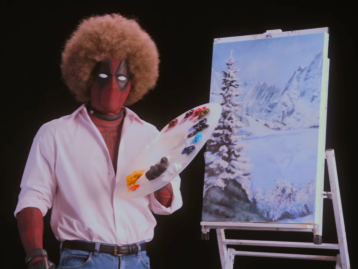 We all talk about the sheer necessity to create characters that don't appear cardboard, that are fleshed out, that generally feel like real flesh-and-blood, living, breathing people (regardless of your character's species or nature) with personalities that ring true to the audience.

There are several elements that contribute to that, from constructing a solid backstory to making sure you let them have flaws to giving them special quirks- all things we've talked about in newsposts in the past.

One more that I think is generally less mentioned but very efficient is to allow your characters to have hobbies- hobbies you KNOW about, and have pictured them engaging in.

It doesn't matter if you get a chance to show them engaging in their hobbies ‘on camera’- if it's an action or adventure, if what they're going through is extraordinary, chances are they won't have time or energy or want to engage in their hobby. When a bomb is ticking down to zero, nobody wants to pick up their embroidery work no matter how passionate they are about it.

So, why is it helpful to take the time to consider what your characters like to do in their off time if you may never get to show it?

It is helpful because a person's hobby is often telltale of aspects of their personality, their interests and their approach (or reaction) to the world and their experiences. Knowing it will help you as a writer to write them more realistically in everything else they do.

A real life example is, in my opinion, telltale: Bob Ross mentions in one of his soothing painting sessions that when he was in the army, he would return home, he'd sit down and paint his world where there was "no hassle, nobody was yelling, everything was good. Nobody was gonna get shot or hurt, not in world." Bob Ross' hobby and the reason why he needed and engaged in it reveals a lot about how he felt and how he coped with his experiences in the army.

In the same vein, your character's hobby will reveal something about them- so take the time to think about it, and then take the time to explain why they do it once you've pictured them engaging in something. And that will have immediately made your character have more depth, and possibly more backstory than when you started the exercise.

So what are your characters' hobbies?

Many thanks to Pit Face for finding me the Bob Ross episode I needed!

Sign up for your #Twitter_Feature! Book your Sunday now, PQ me!

DarkBeauty:Due to her being a Superhero & combat training, She likes to visit her family in both Jamaica and England. Shopping with them and talking about what new with family is all she like doing. SolarCell: She don't have one yet. but if I had to give her one it might be Shopping for boots & taking kick boxing classes. her old self likes to get new clothing or battle gear for war.

For Jekyll; baking, gardening, badminton, swimming, reading and he's a big bird enthusiast. For Hyde; any game that involves cards, hat collecting, reading (though he delves more into poetry), painting and singing.

I know a lot about my characters, and most of it doesn't directly enter the story, but there are occasional glimpses (bound to be in 1300+ pages). Seiko plays violin, is a chess master, and likes to draw. Yuki is a mechanic and practices karate. Kaida loves antiques. Fudo likes to cook. Raidon fences. Tristan sings in the church choir, enjoys close-up magic, ice skates (actually, has a LOT of hobbies, it's a running theme). Alex plays baseball. Brad is an anime geek. Celes is addicted to video games. In most cases the "hobbies" provide background-fillers or things to do during slow scenes. Sometimes they provide a moment of grounding or levity. In rare cases, they provide a plot device.

Some people are obsessed with their hobbies so that it can become a major part of their lives. All too often though a character's hobby ends up becoming some kind of special skill that is called upon in a tight spot to rescue everybody. I remember in the comic strip For Better or For Worse the husband was a model train fanatic and often that'd be some conflict or even humor because outside of work it was always trains. There have been great manga/anime dealing with model builders and otakus and there's GATE where it's turned on its head. The otaku is a special forces officer in the JSDF to support his hobby, but the hobby comes first. But remember people only have hobbies generally in a culture with the free time to pursue them. Medieval peasants generally didn't have hobbies. Their pastimes were usually tied into their lifestyle. Fishing and sewing weren't hobbies to them.Though to a Medieval noble fishing could be a hobby (as well as hunting or smithing) They would have the free time

I did consider my characters's hobbies without even thinking about it that way. It just came naturally I guess. I was planning to show some of them in more "slice of life" moments of my comic in the future. It is a very good advice though. Considering what your character would do even if you know you won't show it can help you figure out what kind of character you're creating and help you avoid making inconsistant character. I will also offer an advice of my own. Imagine some of your characters talking one on one, especially those who don't interact that often. Than try to imagine them talking when they're all in a group. People usually act differently around different people or in the group. The same should go for the characters