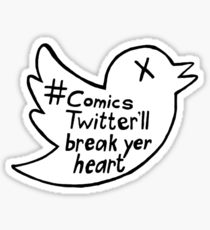 Anyone that knows me even a little is aware that I have strong involvement in common affairs, activism and maintain strong political views. My comic also has a lot of social and political commentary woven into the story and I strive to make my case through my art, be it my webcomics or my narrative work.

So I have seen my share of militant behavior on and offline. It often isn't pretty, as to be militant is often confused with being fanaticised and aggressive, with intent to impose and overwhelm rather than teach or stimulate discourse. It is not something that should manifest in art or education.

And lately, I've been witnessing an ever growing militancy and intense polarisation in mainstream print comics that I never thought would be possible, especially since it concerns superhero comics and the titles owned by the “big two”, Marvel and DC.

At least over twitter, professional comic creators and comic-industry people engage with extremely abrasive language in verbal abuse against comic audiences and other comic creators and also, of course, receive similar verbal attacks. The atmosphere is very entrenched and polarized, with creators mass-blocking audiences from their accounts and demanding that they don't buy their art and products based on construed beliefs, ideology and even twitter follows.

I'm talking of course about the whole ComicsGate hashtag and Move The Needle movement. It seems to have stemmed from a general disengagement and frustration of traditional comic audiences with the efforts of the creators of the big two to make existing, staple superheroes more diverse and varied, possibly to appeal to a wider audience. They also claim that the plots for these characters have devolved into very loose and uninteresting yarns that are only excuses for pushing specific ideologies almost in the form of mandatory PSAs.

The reaction from creators of such comics and attempts to recast the traditional superheroes has been understandably negative (it's hard to receive critique or even roasting of your creations) but also very much straying into baseless ad hominems and readers have been tagged extreme things such as nazis, racists, homophobes, etc. The audiences (and any creators not following the recasting approach to the comics) push back with just as extreme pejorative namecalling, such as SJW, cuck, soyboy, etc.

Honestly it felt to me that the mutual decrying and attacks between Hillary and Trump supporters just transplanted itself to the superhero comics market.

And I do deeply feel that both sides have already lost. Because this extreme and toxic militancy helps neither cause. It only serves to fanatize those already committed to a side, and alienates everyone else. In the process, valid points from both sides are completely lost.

I haven't read current superhero comic titles but I wouldn't be surprised if the actual art and quality of the plots DO suffer on both sides, exactly because creators become more entrenched and thus might tend to enhance the very elements that have been criticised or rejected, thus creating not for the sake of the characters and the story, but for the sake of an agenda- which has high chances of not allowing the characters and the plot to properly develop.

Being committed to a cause is a good thing. Being militant CAN be a good thing- if you know how to control the militancy and when it is the proper time to let it manifest. But never in a medium and a context of wanting to share, educate, entertain or give experiences to others.

So these are my (very wordy) thoughts. What are yours?

No, he hated on the big two via youtube for promoting diversity, and when he had enough followers, launched an indiegogo campaign for the comic. I think the phrase is "laughing all the way to the bank".

@Ironscarf This guy publishing his own title by big two? (I don't know who he is.).

Call me cynical, but I thought the whole thing was just a lot of standard grumbling, whipped up into a frenzy by one guy in order to market his comic and very successfully too. If he'd just put the thing online like the rest of us, nobody would give a rats rectum.

Sports stuff is absolutely repetitive, cyclical, and the nerdiest thing you can possibly be into. I hate it... But it's not for me, haha! If people are into their nerdy love, more power to them.

Unless they're discussing sports and then all sides really are trivial and idiotic. Just watch the freaking game, okay and leave the fan obsessions outside so I can enjoy my meal in peace!

The sides and points of view are anything but pointless or stupid. The people doing the debating and name calling are the idiots, not the actual topic of the discussion. Theres the saying: "Never debate a fool as they will drag you down to their level [of discourse ]and defeat you with superior experience."

If people are arguing about the contents of a comic or a film or something else it doesn't matter if we would find it trivial- it's irrelevant what we think- it matters to THEM because they care about it. So meta-commentary i.e. "both sides are stupid" is pointless, but saying "I don't get involved" isn't.

Another thing that annoys me about these sorts of situations is how it seems like these sorts of things are the only issues people debate anymore when I'd argue there are many other issues that seem, fairly objectively, more important to the real world than the contents of comic books.

I've been involved in activism and I have fairly strong political stances (which I think I can logically defend very well). Nevertheless, the last few years I've tended to avoid getting involved in online debates and discussion (including on this site) because without fail I'm going to either get called some degrading names and/or have my intelligence brought into question, and even I can resist the strong urge to retaliate just a childishly (not a sure thing), I can be pretty sure my 'reasoned arguments' are not going to convince anyone of anything! In some ways I feel like I've taken a 'chicken-out' stance... Anyway, the polarization of politics, issues, and identity - it's maddening and depressing, but as Bravo said, if you look at some history, it's also quite human.

I think that with times, the media is destined to evolve and change. Comics are not the exception. However, I agree both sides are handling this the wrong way. On one hand, changes and getting with the times should be done organically so that it feels natural and you are not changing already well established characters and relationships. On the other hand, we now know that certain practices and mentalities are wrong or just don't work. However, the one thing that there is no debating on is taking a change or idea as a personal attack is just plain childish. Nobody writes a comic with the intention to hurt anybody unless there actually is hate behind it. And no, experimenting with changes or decided you want to keep something the way it is are not hateful. That's the artist's right.

Idiots on parade and the triumph of cognitive dissonance. Remember evidence and facts do not matter, only your belief system. There can be no disagreement because each side has the orthodox monopoly on truth and all others are vicious heretics to be shouted down like in the Roman Forum or the Council of Nicaea. What's old is new again. Read the history of Republican Rome like the Gracchi and it's the same thing but on computer screens with people safe behind their keyboards as opposed to swinging table legs at one another in the forum.

There's an episode of Detective Conan where a man is murdered because he published a piece of fiction narrated by an established fictional character, and the murderer was outraged by it because he thought it was out-of-character. When I saw it, I thought that was the silliest murder motive ever. I still think to, but also frighteningly realistic. People get way too heated over the most ridiculous nonsense -- especially on the internet. That's why I never set anything to "public" on social media and I never read comments, even on the most harmless, light, comedic posts/videos. Internet people are just awful.

Polarisation IS a problem, especially because it's very simplistic and proscriptive. If you profess to believe or stand for thing you are automatically put onto a team and given a whole raft of other beliefs that you are supposed to defend and adhere to: Don't like female Thor? Then you are a racist supporter of the patriarchy, slavery, you're pro-violence against women, religious, conservative transphobic, homophobic, and a gun-nut!