Naming your Child (and by child I mean comic) 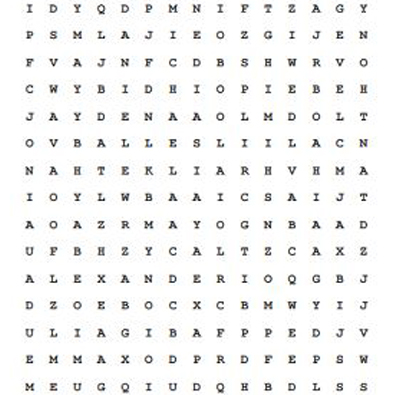 You’ve got your story, your drawn your buffers and you are ready to set your child free and loose in the world. But wait? What name do you put on it’s tag so people know who it ultimately belongs to? Naming a work can be incredibly frustrating and, dare I say, stressful! So here are some helpful tips to help you find the perfect name for your story!

1. Consider your genre and themes
Your chosen genre and theme form the backbone of your story. They often work together to form the overall message and set of expectations that your audience can walk away with. When naming your comic, take these into consideration as people do judge a book by its cover.

2. What’s perspective are you writing your story in?
Is your story from the first or third perspective? Does it have a central protagonist or is it from a larger cast? You might want to name your comic after the main protagonist of the story if it follows just one character. Alternatively, if you have a bigger cast, you can name it after the city, region or even star system!

3. Often times “less is more”!
Think of all your favourite series and begin to pay attention to the length of their titles. Often times they are no more than two or three words long! Try and encapsulate your story in as fewer words as you can.

4. If all else fails… use a random name generator
In the event you are completely and utterly stuck for a name, take a gamble on the random name generators out there and see what they come up with. Sometimes throwing spaghetti to the wall to see what sticks can produce interesting results.

How did you name your webcomic? Did you have a particular process you followed? Let us know in the comments below! And join us on Sunday evening for our Quackchat at 5:30PM(EST).

my title is stupid. I wish there was a way to change the title. So I’m stuck with “character profile SolarCell”. All I wanted was SolarCell. Anyway, SolarCell was really named after another character of mine with exact same name. They both have the same likeness in power but not on the same level. During the early stages of development with SolarCell, I was looking at the quarkiness of the characters on the Heroes Alliance. So, I made her have a few quarks of her own with her powers and power levels. I just didn’t have a name for her. Her powers itself had me research a bunch of stuff that lead to one of my old characters with the same powers. So I just took it and gave new life.

When I had a site at the DMAA (Digital Millennium Artists Association), I called my site M.Organ's Cave, since my avatar was a dragon and dragon's are found in caves. When I came to the Duck I tried a title that would warn people what my comic was about, I think I tried stuff like Dirty Cartoons or something, but the site wouldn't accept those names. Also there was talk about terrorists hiding in caves, so I went with M.Organ Art which the Duck accepted. (Well, M_Organ_Art since periods aren't allowed.)

public humiliation got its name from a critical acquittance who said "your work is so bad publishing it would just be publicly humiliating yourself." so... a negative becomes a positive maybe ? not sure as a title it says anything about my themes..think it says more about my mind frame at the time then anything .. so when we got to the next chapter its clearly just a little more humiliation...

My comic is called Gloom, I registered here as "The Gloom" because an old comic already existed with that name. Before, I was thinking of calling it "The Gloaming"... but it sounds weird (even more XD)

My comic here at DD called "The Continentals" has a pair of british spies/detectives who were in part inspired by the 60's brit tv spy show "The Avengers". When I was trying to come up with a name for the comic I was listening to a Prince album (I'm a HUGE fan) and one the album was a song called "Continental" which had a beat like a spy tv show from the 60's. Add the two together and you get "The Continentals". Dee - Sky Commander writer dude

'Spaghetti to the Wall' is a pretty good name for a comic.

Funny enough, the original name for Fluffy 500 was going to be "RaceU", like a play on the phrase: "I'll race you!" But I felt it was too on the nose and I decided to change it to something that revolves around the world and racing. Fluffy because of the furry characters and the 500 comes from how the two big American auto racing leagues (NASCAR and INDYCAR) have the name of either town or sponsor followed by a number of miles. Yes, it's number of miles, not laps like Disney failed to look up when they made Cars.

I couldn't come up with a decent name for my comic if my life depended on it, just look at the names I come up with. "Cybertech" "The Cosmic Star" "Rogue"

Picked Without Moonlight's name out of a relevant song's lyrics. Worked okay!

And I just used a title generator.. my next comic book title is.. The Shadowy Memory. Actually doesn't sound too shabby?? hahaha

@Ironscarf- Woah, graveyard idea is great (and metal!!). I might steal this..

I am in the process of making a new (short) project. The name part is killing me. Someone heeelllppp me!

I asked my brother. :P I have great fun naming my story arcs, though.

I usually just keep it simple and easy to remember. I don't really like complicating things when it comes to titles though I do like to have some symbolism.

I couldn't decide between Terribly Nice Fellows or Awfully Decent Chaps, so I asked my old friend Unka John, who came back with the goods. My next comic may simply be named after the principal character and I usually find those by wandering around graveyards and reading the inscriptions. That's what happened with my previous discontinued comic too. I threw my hands up in the cemetery and cried "Please somebody, name this character", and there it was, right in front of me.

I went through a few names before deciding on the idea of contrast. I thought two contrasting words would have some appealing pizazz. So I eventually found the way to Typical Strange. Great article!

I go for stuff you'd see on a DVD box with lurid cover art maybe on the Something Weird Video site. Except lo t Sword of Kings. Obvious riff on the epic fantasy thing Lord of Rings, Game of Thrones etc. G.O.O.B. is a take off on C.H.U.D. :) Lots of exploitation movie titles to riff on.

I do comics and my initials are KAM, so The KAMics.

Bottomless Waitress is still the greatest name ever,