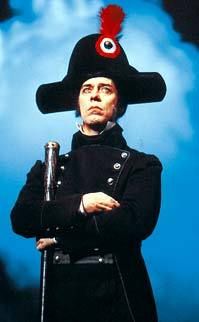 Javert is such a stellar and powerful character in Les Miserables that he has his very own trope.

He's the skilled, dogged, unwavering locomotive of a chaser that in the name of the law, the church, the state, the cause pursues and persecutes the hero of a story, and does so with sincere belief that the hero is in the wrong. Of course in reality, the hero is the one with the moral high ground, but it takes the Javert character an entire hero's journey of his own to understand it.

And then, once the Javert character hits that point where he/she understands that they'd been wrong the whole time, serving a master they would morally condemn, and have been pursuing the person they should be protecting or admiring or helping, comes the crossroad.

The Javert character CANNOT just stop what he/she is doing and be done with it, go home. The makeup of the character is such that they will need to act upon the realisation, because that's what they do: they pursue and eliminate what they sincerely believe is evil (or condemnable in any case).

They need to act, and there's two ways they can take:

1. They eliminate the easiest of the evil hurdles the hero is facing and that they can deal with- themselves. Like the trope's namesake, they commit suicide in some way and take themselves out of the game that way, effecting punishment upon themselves but ultimately leaving the hero to deal with the big bad.

2. They join up the hero's cause (however hard that might be to accomplish) and they work to eliminate the big bad themselves, make up for the damage by reconstruction and advocacy, generall help anyway they can to mend and further the hero's mission as a way of repentance- the St. Paul effect, if you will.

And there could also be a third way, where they choose ‘all of the above’… and off themselves AFTER they have corrected what they could in the best of their capacity.

Any of those options can be powerful in the story, so much so that the Javert character might highjack the spotlight and the audience's affections (who doesn't love the penitent reformee?). And it definitely adds drama and depth in the story.

The question is, which should you pick, as in what will be more realistic for your Javert to do? What will sound valid and powerful as opposed to melodramatic and overblown?

That's what I'll discuss next time :)

Have you had Javert characters in your webcomics?

You forgot the option of aiding the hero to defeat the big bad, and then trying to arrest the hero. Of course, if the hero is not breaking the rules, and had just been framed, then the Jarvert aiding them makes sense. For extra points, if the Jarvert destroys lives in his efforts to catch someone, and ignores it as legal and acceptable for his task, then that could be the trigger. For an amusing variation, have the Javert think the hero is working for the villian and that being how he knows where the evi guy's forces are.

Interesting! I have a sort of former friend/enemy character who may end up a bit of a Javert (a comedic take on one, at least)... if I ever get back to doing these comics!

And then there's another real life Javert: Robespierre. There was a recent BBC/A&E version of The Scarlet Pimpernel that used him to good effect in that role. Of course Robespierre was overthrown and got his on the guillotine and Fouche remained self-serving (and the letter of the law) until the end and survived. The D&D alignment lawful evil can be defined this way and can be applied to an absolute tyrant who rules precisely according to the law. Henry VIII?

Tricky! I'm pretty sure the realisation would drive my version of Javert insane. Suicide is not an option, simply because it's a taboo for someone who is so married to all kinds of rules. Nor would I like to slip into the "evil guy turns good and sacrifices himself" pattern, since I think that's too overused by hollywood and stuff. Most likely he'll retreat into a world of his own that has only a passing resemblance with what's happening, leading either into catastrophe or just plain silliness. Probably the first, as I've known people with a mental disorder and there's really nothing funny about that.

The Reign of Terror and French Revolution was full of Javerts as was the White Terror that followed the Restoration so Victor Hugo knew what he was writing about. And then there was a real-life Javert; Joseph Fouche. He was a man who stood for the letter of the law and any means necessary to obtain it a fitting counterpart for Talleyrand. By one interpretation you could say that Tales of SIG is about an entire organization of Javert, but Aordians have a little bit more humanity than that. But they don't look that way to those outside their culture. They also have the added twist that to them free sexuality is part of their moral code. Or it's all about boobs.

You forgot the "sacrifice themselves for the hero's cause" which I guess is a spin on your third option but far more meaningful imo. Suicide is generally meaningless and wasteful -- or it feels that way to me whenever it comes up in a story (regardless of motivation). Self-sacrifice is jarring but powerful. It's a gut-punch to the reader, but it oozes with purpose, and if it is presented well, the character feels more fulfilled, and the reader sees no other way of resolution (or that it was the best course of action). I've never mastered that type of character but I greatly enjoy them. (More when they don't die but help and have their own "happy ending" because I'm an idealistic puddle.)

I haven't seen that in webcomics but anime is chock full of antagonists that do this :D I love it! Every time the charter has a seen you almost scream at the screen pantomime style "You've been miss-led! You should be helping the hero you silly person! You're really on the same side!" haha!