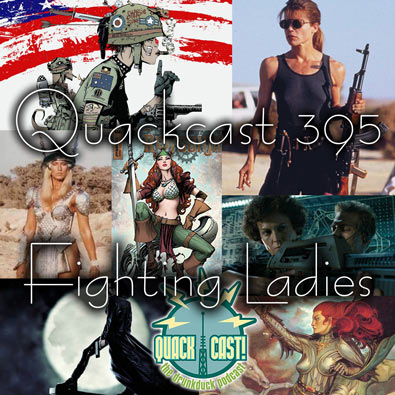 Fighting ladies, female bad-ass characters… There are a lot more of them around now, but once upon a time they were pretty thin on the ground. I love a good badarse lady, my own comic character Pinky TA exemplifies that character type. There's something about a tough lady who can kick butt with the best of them that's especially compelling. They evolved from something a little more exploitative, ladies fighting in bikinis basically, then we had ladies that were just the female version of a male character (Batwoman, Supergirl etc), which is something we're starting to see a little more of unfortunately, but on the good side of things we ARE actually getting fighting ladies who're their OWN women: Original characters. In this Quackcast we talk about some of our faves and some of the earlier incarnations of the character type, from Robert E Howard's Red Sonya and Valeria, to Catherine L Moore's Jirel of Joiry, to Wonder woman, then later characters like Red Sonja (from the comics), She-Hulk, Sarah Conner, Ripley, Buffy, Xena, Aeon Flux…
What are some of YOUR faves?
Mine are Tank Girl, Lara Croft, Motoko Kusanagi, Garnet and many more :)

This week Gunwallace has given us the theme to Dolphin Bros: Jump, jump, jump up and down to this mad dolphin party scene. It’s all over the place but all it wants you to do is MOVE!

Listen to us on Stitcher ​​- https://www.stitcher.com/s?fid=224306&refid=stpr
Or TuneinRadio - https://tunein.com/podcasts/Books–Literature/Drunkduck-Quackcast-p1150194/

I'd say they're distinct from a badarse. They can become badarses but running from a big bad and not going down is more of a survivor thing. It's a character trope dominated by female characters while badarses are dominated by male ones.

All this said, how do scrappy heroines fit into the mix? You know, the ones who aren't necessarily physically imposing but just refuse to go down without a fight. It's been awhile since I've seen them, but Nancy from A Nightmare on Elm Street and Sidney from the Scream movies (and I guess a number of "final girls") would fit this bill (movies that aren't generally associated with strong woman characters). Sarah Connor even fit this category in the first Terminator (and her scrappy attitude paved the way for her evolution into a kick-butt heroine in T2).

usedbooks and ozoneocean are exactly right. When creators are giving life to characters they like and want to follow, all is good--the characters are given the respect they deserve. When characters are created by focus groups or marketing/accounting departments, like with many movies--or worse, a created character is edited/changed by committee for marketing purposes--things fall apart and you end up with obvious pandering shoehorned in. In these cases, the obligatory scene of the woman knocking some guy out is sort of the "tough-girl" equivalent of putting glasses on someone meant as eyecandy to show that she's "smart." This is the stuff that I was talking about (not a general dislike of character type).

I think a good bottom line is any role should be able to work with any gender. Write the character well. If you like a type of character, and they are well-written (and acted), it can be even more enjoyable when they are in a less common demographic for the role. (TBh, I love an ELDERLY badass. Dunno why. I really enjoy elder casts in general.) I love smart/resourceful/rogue types myself. Any gender, any age, any race, any species.

I considered the whole "why doe the lady HAVE to be a bad-ass?" thing and I discarded it because I realise that I just plain LIKE those characters, when done well of course. I love a male bad-ass and I love a woman in that role just as much. She doesn't have to be a surrogate mother figure like Ripley in Aliens or an actual mother like Sarah Conner in T2 to be proper woman badarse either, she can be manly, she can be whatever. Look at Gina Gershon's character in "Bound". She's a lesbian, protecting her lover, outsmarting the mob. She's masculine in the role and works it perfectly. No over the top heroics, but she's powerful nonetheless. Seras and Integra in Hellsing are two other levels of baddarsery, one learns to embrace her vamipirisim and become walking artillery with a 30mm cannon, the other is a powerful leader who can stare down death and make it cower.

usedbooks hit an important point. The kick-butt heroine can be a lazy and ultimately sexist way to portray females. Hollywood in particular seems to think that having a girl knock a guy out is somehow proof that the woman is "strong." KAM pointed out The Avengers. The TV series had a good female lead. The movie with Uma Thurman was abysmal. First, they have her physically outdo Raphe Fienne's character in that ludicrous fencing match (that goes through a Men's-Only club, in a bit that's about as subtle as a 5-ton anvil dropped on the head), but then become this lost, useless character after she's captured by the bad guys, and it's up to the man to stop the bad guy. Showing that she can easily best the hero in a sword duel is hollow pandering if they turn around and make her useless when the plot actually counts. Then there's the frequent elimination of femininity with as "kick-butt" women, as if a woman can't be tough AND emotional and feminine at the same time.

When I started making chars up for my comic I wasn't really thinking about gender roles. I was in 9th grade and just wanted to draw cute girls. I didn't want that to be what defined them though. I wanted them to be realistic. As realistic as one can be in my outlandish universe. So Fenny and Sally got to each find their own ways to be bad ass. Fenny easily exemplifies this type of character. In movies and TV I never had a preference wither as long as the characters are powerful on screen with a decent story.

In a world where "The Bechdel test" is now a Bechdel seal of approval, my favourites are whichever one your heart desires.

Tbh, I was never a fan of the badasses of any gender. They just aren't the character type I'm into or can empathize with. That said, I love a well-written female leader-type. Those are MUCH less common. Writers tend to make them one-note songs, over-aggressive assholes. I love 99 from Get Smart since she is so competent but also fits into the world where everyone on all sides are a touch ridiculous. She's a spy and aces in a fight but I wouldn't call her a badass.

Furiosa and the original butt-kicker Princess Leia (talking back to villains and saving the skins of the male heroes from the start--"Into the garbage chute, flyboy!") also deserve mention for me.

My fave (and huge influence of Fusion) is Empowered. She kicks all sorts of butt despite all the humiliation earlier in her career, and has an endearing emotional vulnerability and perceived body-image issues that makes her more human than superhero personality-wise. Come to think of it, Ninjette and Sista Spooky from the series are also awesome characters. KAM--I think the Batwoman/Supergirl oversimplification was in regard to their initial creation and not in how later writers developed them.

After we recorded I thought of Carol from the Walking Dead, a character with one of the best character arcs I've ever seen on tv, and a butt-kickin lady for sure.

My faves, Mrs. Peel from The Avengers, Tara from The Warlord, Chian from Arion Lord of Atlantis, Jinal Ne Comarr from The Barren Earth, She-Hulk, Sally from Life and Death, Kylie from Serpamia Flare, and probably other I can't remember at the moment.

"the female version of a male character (Batwoman, Supergirl etc)" Well that's an oversimplification. The writers did try to write the female counterparts differently from the male heroes. Batwoman was not Batman with breasts, etc. Now I could see an argument that by trying to make them different from their male counterparts they might have been less effective as heroes and made building a fanbase for them tougher, but I think it's actually more complex.