A Few Banksy's Short of a Sotheby's 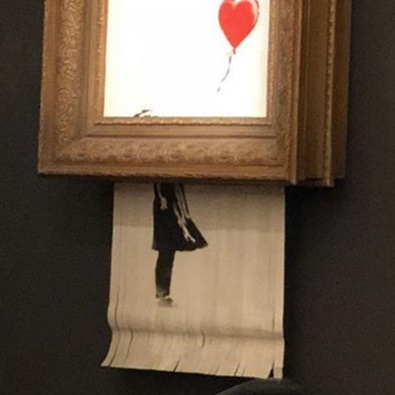 Over the last twenty-four hours, the latest story about UK street artist, Banksy, has shown up on my social media newsfeed, in passing conversations, and in text messages. My friends immersed in the art world are talking about as well as my best friend since childhood and my own sister.

If you have not heard the news story, here is a summary: a painting of a young girl with a balloon was auctioned for $1.4 million dollars at a Sotheby's just to have it self-destruct by shredding minutes later. Banksy later posted a video how he had planned this years ago by installing a shredder into the frame of the painting if it were ever sold at an auction. The story has caused quite a stir with many people reacting to it positively as it was a great prank.

As a street artist, Banksy never intended for his work to be auctioned as a Sotheby's. His work is usually put on display in public for the masses to come across and not meant for a museum where only a select portion of the population has the privilege to enjoy. After his story went public this weekend, he has successfully brought the idea of his work into casual conversations, and I am another person passing along the story just by talking about it.

The main reason I am bringing up this Banksy story is because it reminds me of the Dadaists from the 1910s and how Francis Picabia made his signature and entire piece of art to make a commentary of whether it belongs on a painting. Also, the way Banksy's art piece made its way into an auction house the same way Marcel Duchamp's readymades were on display in a museum really show the curious nature of art and how some are considered high art.

As a consequence of this, the picture has gained considerably more notoriety and I'm sure value too, since publicly shredding itself. A conceptual masterpiece?

That's pretty much also the ending to 2013's "The World's End" (and hey, the ending to JTHM as a matter of fact): Without giving it away, when you try to synthesise/idealise the beauty of youthful imagination/potential rather than understand it by the source's heart, you're doing it wrong.