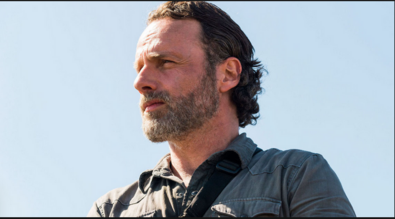 The Walking Dead is apparently killing off its main character this season - this is the guy who's been the main guy since episode 1 about 8 years ago. This is not a spoiler - it's all over the Internet, the promos for the show itself.

The Office lost Michael Scott before doing two more seasons I think - and Mulder left the X-Files before the last season (though he showed up in the finale).

Emma wrote a post about offing your characters - it's great stuff:

But axing the MAIN character is different. Talking to my brother about the Walking Dead thing, he made a good point that there are several great characters who can take on the central role. Neither of us are huge WD fans, but I agreed with him that Maggie, Morgan or Michonne are fine choices for new leads (well - Morgan's gone a bit nuts, but still an awesome character). And Carol and Daryl are excellent characters and co-leads.

That show might survive this because of its nature.

The others I mentioned, the X-files and The Office…and Two and a Half Men and That 70's Show - they didn't last long after the lead character left. Some series lean heavily on their lead characters. Most series, I would say.

In books or comics, we don't have the problem of actors who leave our series. Assuming we own all the characters we're working with, we can keep them around as long as we want. But even then, sometimes we feel we need a shakeup but don't want to end the series. So how would we continue without our main character if we wanted to?

Well, off the top of my head…

1. Make it matter. Unless the series is a particular genre, like an all out comedy, or gritty thing where anyone can die, the weight of losing the character should be felt by the rest of the characters. This is the case for the loss of any major character, but the main character especially.

Even in those genres I mentioned, it can matter. Readers get invested in characters when they spend time with them!

2. Don't forget them. A shout out here and there, even after some time has passed, can be very rewarding for readers. Mentioning their name, or meeting another character who new them but didn't know they passed, or seeing some significant effect of that absent character on the series can be as rewarding for readers/audiences as it might be in real life. After Mulder left the X-Files and new characters took over, there was a scene where the new agent looked up and saw all the pencils stuck in the ceiling that Mulder had thrown there in a classic episode. Great moment. Damn, I get chills just remembering it all these years later!

Can a series survive the loss of its main character? Could yours?

Needless to say, I my main character got killed off, it's over!! One day maybe I'll try a cast with an ensemble where the main can get killed off and it can go on!!

The series that handled a rotating cast best was M*A*S*H. Some of the replacement characters outshone the originals but none were carbon copies. Winchester versus Frank Burns? B.J. Hunnicutt and Trapper John? Colonel Potter? The only character that you couldn't lose was Hawkeye. He was the focus, but nearly every other character was replaced by another. That series shows how it can be done and done well.

If you have a story that revolves around a single protagonist, killing that protagonist effectively ends the story. Look at All Quiet on the Western Front for example. But if there is an ensemble cast of leads, one or two are certainly expendable. But so often in a series when a great leading character is killed off, the actor will end up wishing there was a way to return. And then Patrick Duffy steps out of the shower and it was all a dream. Or you end up like Denise Crosby from St:tng. Oh what might have been Tasha.

SPOILERS I don't mind killing off chars of any caliber... That's all I better say!

That carbon copy thing exists in TV for a good reason. The scriptwriters are usually working on scripts and script ideas during the current season of the show and don't know that x-character will die or leave. So while rewrites can happen it's usually easier to have a suspiciously similar character to handle those lines.

My comic has multiple main characters, so it could survive a loss (just not all the losses). I have not figured out who is most important. Lol. But I don't need to speculate since I already have the framework for the finale, and I know who is there.

For me, a series is its characters. It can't lose its characters and still exist. It's like a band losing its members and just keeping their instruments.

I watched only one series that did this. The weird thing was that it continued like a completely different series with a different cast for a long time, and it kinda was better. It was Silk Stalkings (a police procedural crime drama). At the end of a season, the male lead was in a coma after the female lead got pregnant by him and they had their love confession thing. Anyway, he died in his coma and she left the police department. Which really seems like the end (the crappier end) of a series. But it came back with two different detectives. It was not the same show. It was like a new police procedural crime drama series. It was really good, actually. Kinda felt like the writers wanted to make a new show but weasel it in with their existing contract.

My series wouldn't—at least not in this era—because the series centers on a character and a particular character dynamic. Maybe in a few years, I'll have enough peripheral characters—I certainly want to tell their stories—but that would feel like a "spinoff," not a continuation. But a lot of series can. WD could probably make it because the series is ultimately about the setting. The character dynamic changes, but the setting remains. There are some series I have watched that would have benefited from a more fluid cast. Like, I always thought Community would still be going today if they had acknowledged early, early on that few people spend more than two years at a community college. Rather than finding weird ways to keep the cast at the school… and stumbling whenever someone left (and committing the error you mention of replacing that person with a carbon copy of a departed character), there could have been a continually evolving cast of students in the study group.