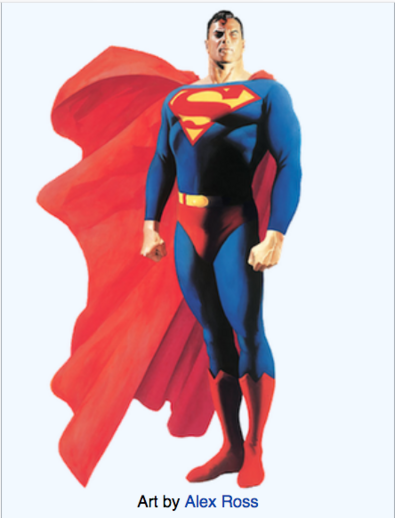 2018 marks the 80th birthday of the big guy himself - the OG superhero.

Actually, there were precursors to Superman. But he popularized and defined the ‘Superhero’ character-type and genre. He was the template for countless characters who came later, with his flying, strength, the secret identity and so forth.

There were a couple predecessors in comics, but his ancestry might stretch back to ancient Myth; the Greek Pantheon of Gods had incredible powers and sometimes walked among mortals.

The “hero” part may have its roots in characters like Zorro, Robin Hood, and the Scarlet Pimpernel (though those are more like Batman types). Wikipedia suggests Popeye as an early version of a superhero!

It's always been neat to me that the original template version of the superhero is still active in fiction to this day, and one of the major icons of the genre. Really, it's still Supes and Batman, created a year later, who are the Titans of superherodom.

He featured in comic books and newspaper strips, on the radio and in early television programs, cartoons, and of course, in 1979, began the era of big budget superhero movies in Superman The Movie, starring Christopher Reeve (who still defines the character on film. No offense to those other guys!)

Anyway, I just read the other day that it was ol' Clark Kent/Kal El's birthday, so it seemed worth a mention!

For an incredible Superman story (and an incredible superhero story in general), the graphic novel
'KINGDOM COME' by Mark Waid and Alex Ross gets the highest recommendation.

Happy Birthday, Man o' Steel! May the Kryptonite never cross your path! Except, you know, for dramatic purposes.

I think I'm going to honor the man again in another Newspost or two; there is more to say about him.

That's something I still listen to sometimes when I want to feel inspired!

Looking good for 125 years old. That would be his chronological age.

Is it a plane? Is it a meteor? Is it a rocket? No! It's... some dork who wears his underpants on the outside! :D But one who in some way or another inspired practically every comic you'll ever read, and that's pretty damn awesome!

I haven't read many much Superman stuff, but I have come across 'repect' forums posts. One had him going against the Greek God Apollo. Apollo was all haughty and condescending, and then he blasted Superman with his Solar Power... and Superman gets powered by the Sun... That was fun to read!! :D

Love watching the 1940s Fleischer Superman cartoons. Amazing to see him jumping rather than flying! I grew up on the 1950s TV show so I knew of Superman before I could read. I got a huge Superman treasury book out of the library as a kid that had stories from the 1930s to 1960s.

Superman will always be my greatest inspiration for a hero who is truly good.

John Carter of Mars is sometimes listed as an influence, which surprised me when I first heard, but thinking it over I realized it made a lot of sense. Superman's in-comic birthday used to be February 29, have they changed it?

Faster than a speeding bullet! I read a ton of Superman comics while growing up, loved them all. And yet I chose the darker path of the supervillain.