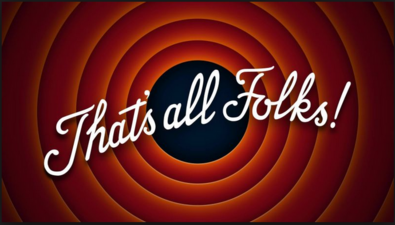 After the End …and the Duck is on Patreon!

All stories must come to an end somewhere - whether it's a “just another day” ending, an “everybody dies” denouement, or the always wonderful “it was all a dream”. Or maybe it's just the end of this adventure, with another one to follow, as in a TV series-type comic.

Endings should provide some closure to the adventure (even if just the current standalone adventure), and answer the questions asked in the story. Setups are paid off, particularly the big one. Characters reach the end of whatever journey they've undertaken, for better or worse, successfully or not.

The ending of the original Rocky movie was apparently supposed to be at the high point of this guy's life. One second after he raises his fist in the air, things go downhill (at least somewhat. He was maybe going to have an okay life - the point was, this was the height of it). Then he came back for sequels of course, which made Mister Stallone very, very (rich) happy I'm sure.

Most endings set up a “future” for the characters that's left to our imagination. Whether they lived happily ever after, or they just LIVED (in the case of a horror or thriller). The ending of the movie SIDEWAYS originally explored the marriage of one of the characters for a little while, but the director realized it was the story of two friends, so pretty much had to end with a moment between those two guys.

I find that endings are often the first thing I think of in a story - I want to have an ending that feels like this.

How are you with writing endings? Is there one you're proud of or looking forward to writing? Do you struggle with where…an when…to end your stories? What are some of your favorite story endings?

The Duck on Patreon!


Our patreon page is born! - it's a brand-spanking new little hatchling, but it's there! Support our efforts to keep improving the site! More rewards will be added as we figure them out, but a $1.00 support tier is there now!

The Duck on patreon:

Still, I can't blame these authors completely, because concluding a long story can be an annoying business, and if you just want to get done with it no matter what, slipping into one of these three types of crap endings happens so very easily, and the temptation of trying to use one of these crap endings in a humorous way is so very strong (Don't! They're usually too overused to be funny). It's the same with me, too. For instance, with my print book, struggling with how to end it took me more time than any other single thing. The one thing I can really think of to avoid a crap ending is to plan it before writing any of the other parts, i.e. essentially writing your story backwards. By the way, the same applies to episodes, unless you want them to look half-baked. This is why making an episodical comic like I do doesn't work as an ending-avoidance scheme (even if I originally hoped so).

I've seen authors ruin their stories with their endings way too often, especially when they apparently tried to rush the ending as soon as they got to the desired number of pages. I distinguish three main types of crap endings, here: 1. the artificial construct - when too many coincidences have to come about to make everything fall into place, often adding some last minute information that was totally absent for the previous 400 pages or so; 2. the riddle: basically just aborting the story at a random point, leaving all the unresolved threads dangling as if they weren't particularly important; and 3. the 20,000-ton ending that is at least very final in that the author finishes everything by having a large weight labelled "20,000 tons" drop out of the blue sky.

my comics are on-going...Story arcs end...but the adventures continue!!!!

I've almost reached to end of mine, but the whole thing was written before I started so the fun has been in how well or not so well I could realise each scene. I'm hoping to bring things full circle and tie everything up neatly and I'd like to think there's enough there to ensure nobody feels they've wasted their time reading it!

I don’t write ends of stories. What I do is pass the story on to another. The next generation. The fate of the characters I create comes to a close but life goes on. Happy or sad. I kind of like movies that end and gives a basic conclusion of each character. So even though the story ended, life continues.

I suck at endings in all things. I manage story arcs okay but not entire stories. I am in the process of writing the finale to Used Books, and it is a challenge. I had to pick which were the most focal characters (good, bad, and other) and figure out what ultimately should become of them and how to resolve their character arcs. The fact that it is not a concise, focused story makes it more difficult. Also trying to come up with climaxes and showdowns that need to break through limits and go beyond any that came before is tricky too. The longer it goes on, the trickier it is.

When I first came here 9 years ago (back when it was 'Drunkduck') I started a comic called 'Jim and Shawn', aka 'Jands'. My original ending, given how I was not only finishing High School but in Mexico at the time, was to have each character kill himself in creative yet messed up ways from hanging with an activated ferris wheel to drinking a mixture of pinesol with expired medicine on a wine glass (if you lived in Southern Mexico from 2008-2010 you'd be surprised you even survived there given how similarly violent it became). In 2014 I realised killing my characters off like that was heartless, so I gave it a more heartFELT yet ambiguous ending because, hey, I wasn't living near shootouts, amateur hostage situations, nor even minor earthquakes anymore, ALL a few meters away from you. Why show it? This especially made sense to me because when I actually started the strip I had yet to move to Mexico, giving it the ending that brought me back to who it was, just with more experience.

Of course I've only completed one comic, and I was pretty satisfied with the ending! It brought closure to things, but suggested future stories to come, but felt 'endingful' enough that if I didn't do any sequels, it'd be alright! (at least, I feel it did all those things). My current comic has a definite ending, but at the pace I'm going will it ever be reached?!! But I told myself I wasn't gunna worry about that!!

I have a true ending, a possible ending and the ideal ending. Also, an epilogue is really important I think. My story is supossed to be a single story, don't want a sequel but instead a two parts story. The only gripe: I don't know when I'll use those endings. Great article Banes!

BTW have you heard about something called Patreon? Maybe it's something the Duck could get involved with? ;-)

Most of my recurring characters were one-shot characters that I decided to do more stuff with, so a lot of characters began with endings. Heck, my Gertrude & Brunhilda series started with a dragon cartoon where the then unnamed girls looked doomed to become dragon chow. Fortunately I decided I didn't want them to be dragon chow.

While I made many story and chapters endings with no problems it took me YEARS, decades to finally come up with the ending to the entire series. It was just a couple months back in fact. And while there is no guarantee it’ll stay or that I’ll ever make it there; it’s nice to know I have one! Time to check out this patreon!

With five completed comics I do endings. But with three of them leading into each other - sequels often suggest themselves during the production of the other comic. Stories can be organic with bits shooting off into all directions. My problem has been keeping it all in line always having the end in view. Having the end in view for me is a good way to keep from getting in a rut. There are still unproduced continuations of the original Robofemoid story. If I ever get there without getting sidetracked.