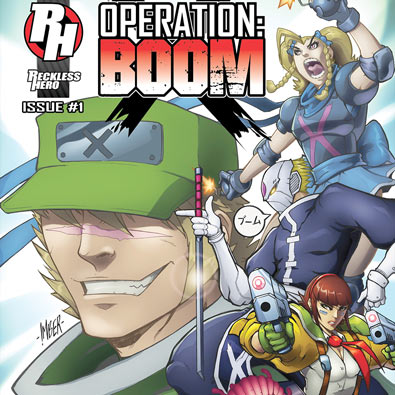 A dangerous terrorist mastermind, The Gentleman, has hijacked control over the world's robotic drone armies. Only one small mercenary group of combat experts stands between him and total anarchy… among them is his daughter, Boom. They embark on a reckless frontal assault against his desert stronghold in an effort to regain control of the robotic military force. Operation Boom is brimming with fast paced, exciting action, combat, explosions and more. It really IS action packed! The art is real eye candy, drawn with pencil then digitally inked and coloured to a professional level: Quite stylised in an angular fashion, featuring great foreshortening and use of perspective on figures. The story is an action adventure that rockets forward at great speed. Break out the popcorn!

It's a pretty comic 😊