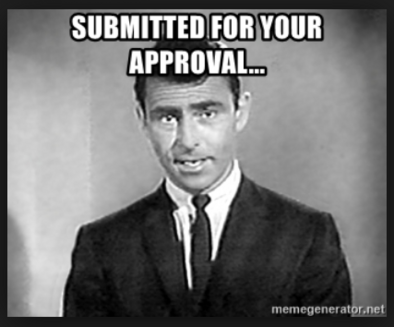 Lately I've been watching the original Twilight Zone series. I'm still early in the series. I watched it as a kid, but there are a LOT of episodes I've never seen. Of course, the Twilight Zone is in my bones just because it's so much a part of the culture. So even some of the ones I haven't seen, I already know.

But there are quite a few that I didn't know of, and something caught my eye. The episode “The Last Flight” was lifted, expanded on, and transplanted for one of the greatest Star Trek Next Gen episodes “Yesterday's Enterprise”. A really creepy, cool little episode called “Mirror Image” is something I've seen all over lately in ‘doppelganger’ stories, noticeably Jordan Peele's “Us”.

It's not just stories being repeated - it's the fact that some really impactful stories - some all time greats for me - were lifted from the Twilight Zone. I don't remember seeing Rod Serling, Richard Matheson, or the other writers or the show credited anywhere at the time. I think Jordan Peele said his movie was based on the “Mirror Image” episode. Star Trek Next Gen, in particular, seems like the writers were plundering The Twilight Zone like mad (in the first season so far, I've seen three or four episodes that became Next Gen stories).

As I get older, I notice a lot of recycled jokes, plot points and dialogue showing up in movies and on TV. And in books I'm sure. #noreading.

For some reason, the influence of Twilight Zone strikes me as especially glaring. Maybe because entire stories were lifted from it and I had no idea until now. I've worked here and there on a some Paranormal and Horror series, still in development - maybe it's time to start planning which Twilight Zone episodes I'm gonna steal!

By the way, I just realized that the Twilight Zone is 60 years old this year.

Hey… there was a reason for this post after all.

The series is being remade, for I think the second time, right now. And there was a TZ movie in the 80's. But I say take a look at the original show if you care to. At 60, a lot of it holds up incredibly well.

Have a fine day!

As a child my brother used to buy Marvel comics but I was more captivated by those short filler stories in the back which just explored cool ideas like a guy who had found the secret to eternal life, a way to stop time, or become invisible etc. I don't know which came first but it seems likely that one was heavily inspired by the other and though Serling's writing was far superior it was often just the ideas themselves that excited me most. One thing I do love especially about Rod's work is that his stories were always very easy to follow, cleverly using the idea of the mysterious 'zone' to free himself from having to concoct complicated explanations and allowing him to just explore and play with an idea to the fullest, which he always did so well. Another thing I really love about watching the original series is that it's like a time machine in itself. When I see a guy lose his way and end up in a small town that seems to be frozen in time, I'm thinking, yes matey and so now are you!

My personal favorite is the Christmas episode "Night of the Meek" with Art Carney. There's also "A World of his Own" with Keenan Wynn (son of Ed Wynn who's also in several episodes) where Serling commends him for being in firm control of his corner of ... the Twilight Zone.

@artdude2002 - Yeah, that was an excellent episode! Very creepy, and one of the ones that was copied for a Next Gen episode.

@bravo - I think the hour longs were the Fourth season? They're in there; haven't gotten to them yet. I'm watching in order (besides the Shatner episode on the plane. I had to see it again!)

My favorite episode was And When the Sky Was Opened. If you haven't seen it, check it out. It's classic Twilight Zone.

@ozoneocean: I always thought of it more along the lines of: "Be careful what you ask for, you just might get it." And then wouldn't you know I had to go live through things like that? And it never ends after 28 minutes with a nice wrap up by Rod Serling. But as Rod said in the episode 'A World of his Own' "that's the way it goes..."

Of course most modern viewers always forget the other eerie anthology series of the early 1960s like "One Step Beyond" and "Boris Karloff's Tales of Terror" or "Alfred Hitchcock presents" . You can find a selection of them on Youtube. The thing about "One Step Beyond" was that the stories were often based on true accounts including George Washington's dream at Valley Forge and the Angels of Mons.

@Kam: if you had seen the episode without ever having seen Columbo it's much better. Just like trying to watch Richard Basehart without thinking of Voyage Under the Sea. Jack Klugman without thinking of Oscar Madison. @Banes a few of the Twilight Zone episodes were specific to Halloween: like the Howling Man and The Grave. The Grave featured three actors from the recently completed John Ford movie "The Man who shot Liberty Valence" : Strother Martin, Lee Van Cleef and Lee Marvin. Some people can't get past the "failure to communicate" line whenever they see Strother Martin which is really unfair to his acting legacy.

Night Gallery was kind of a contractual obligation Serling got into. The series really went for cheap laughs and scares and he didn't like it. Still it had some decent adaptations of de Maupassant and Lovecraft. In some ways it was "Love, American Style" of horror. Another spotty anthology series from the same period. I grew up watching them. @Banes did you get the hour long Twilight zones too? Some real gems in there. Can you name the four Star Trek actors who appeared in Twilight Zone? Outside of Shatner and Nimoy, George Takei (a late episode about racism) and James Doohan.

Yep. The earwig was in it. And there's an interesting one with Leslie Nielsen making a bet he can spend a night in a scary house. I have two seasons on DVD. Like all (decent) anthologies, episodes are hit or miss.

Btw, have you seen Night Gallery? Rod Serling made it a bit later. It's an anthology with stories ranging from 5 minutes to an hour or more. Very loose format. More horror than sci-fi but some of it is just silly jokes about vampires and monsters. I feel like it was a looser series. I found it super cheap because it's a bit forgotten/unknown.

I love Twilight Zone. I check out every anthology series. Many Twilight Zone episodes were based on short stories (same with other anthologies). And short story authors get their ideas somewhere too. We probably would never be able to trace the essence of stories to their origins. They get changed, modernized, twisted, but storytelling predates writing, and the themes are as old as language. Now, some of the telling, retelling, and remakes do the stories better than their source or their source's source. TZ told their stories very well. I also enjoy the newer (90s) version of the Outer Limits. Some episodes are god awful in their writing/plot, but the acting is fantastic, so even the horrible episodes are worth a (one) watch.

@ozone - Haha! I love it. I'll keep an eye out for those strange moral messages. The elevated language and delivery by Rod Serling do give a certain gravitas. It works! And yeah, it's a very well written show. There have only been a couple episodes so far that fell short in that department. And some are legitimately eerie, even after all this time.

@bravo - I read about the sequel written by Ira Behr and starring Bill Mumy, that omnipotent little brat. I look forward to seeing that sequel!

Sometimes it's fun to see an actor you know from a later project in an ep. Sometimes it's distracting. Peter Falk plays a Castro-like dictator in one ep, but he kinda comes off as Columbo disguised as Castro. ;-)

Tey were nicely done and had clever writing though. I liked the eerie feel.

I remember that a lot were O'Henry style stories... sort of having a fake moral point that wasn't a moral point at all "You wished someone good luck, NOW we're going to show you the error of your ways for that heinous and stupid wish by making everyone have bad luck except that one person and it will be all your fault you stupid, selfish, pathetic piece of shit! Kill yourself!" XD

“There is no such thing as a new idea. It is impossible. We simply take a lot of old ideas and put them into a sort of mental kaleidoscope. We give them a turn and they make new and curious combinations. We keep on turning and making new combinations indefinitely; but they are the same old pieces of colored glass that have been in use through all the ages.” ― Mark Twain

The 1990s reboot actually had some follow ups to original episodes rather than just remakes.