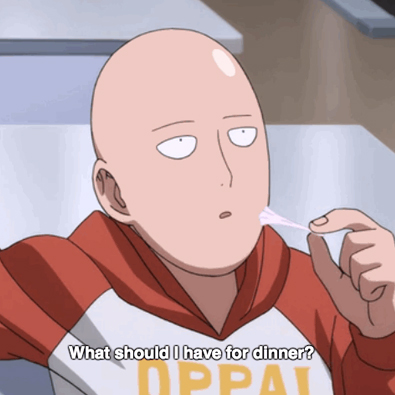 Last week we looked at lovable/hateable villains. So, in that spirit why not flip this coin and talk about what makes a hero feel real. Now, a protagonist is not necessarily a hero. For instance, despite being the main focal point through which we, the audience experience the story, Walter White from Breaking Bad is a far cry from what we would define as an archetypal hero. So what makes up a hero and, in turn, how can they come off as more relatable?

A hero, in short, is someone who has the drive to pursue a positive goal, often times one that appears insurmountable by every day standards. This can range from an “everyday hero” where the goal, though difficult to achieve, is one that is accessible to one who has the adequate drive and training, often spurred on by selfless intent, to a hero that exhibits great power and abilities not experienced by normal humans who then goes on to tackle out of this world villains.

One Punch Man’s Saitama, for instance, is the most powerful hero in the world, possessing the ability to literally “one punch” any and all adversaries. However, his struggles are relatable. His power means that he is bored with life, looking for the next thing, or villain, that can challenge him. In the meantime he is overlooked by other heroes, oftentimes not given the credit he deserves due to his unassuming aura and inability to inspire others despite his strength. But let’s take the idea of a hero and push it beyond the archetypal hero some more.

When a hero has the ability to change events or deal with them using sheer force taken away and they are subjected to the will of chaos as it were, their character and struggle becomes immensely more relatable; in other words having no control over your situation is more relatable. The hero’s sheer force of will, rather than sheer force of power, more interesting to watch as you want them to win from an emotional level. When they fall or doubt themselves, you feel that much more than if they had the ability to punch a hole through the universe.

Vulnerability makes any character, be it a villain or a hero, much more interesting to watch because it stirs an emotional reaction in us, which, in turn, sparks us to relate our experiences with what we read and see. By pushing a hero to be less powerful, vulnerable but still possessing a strong sense of will, means we relate to them a lot more.

What hero do you find the most relatable? How do you do that in your comics? Let us know in the comment section below! And join us on Sunday evening for our Quackchat at 5:30PM(EST)!

I've always found that my favorite heroes are ordinary people who are put in extraordinary circumstances and rise to the challenge. A lot of superhero stories get the feeling right during the origin story but then that feeling quickly peters out as the story moves along. A lot of my favorite stories are ones where the writer manages to maintain that feeling throughout. Lord of the Rings (the book), Strong Female Protaganist and Sluggy are all stories that I thought really managed to capture and maintain the feeling.

In my comic, my protagonists fail often, but sometimes failures help them, and in any case, they always try again. I don't think any of them have that presence and charisma that makes a character particularly heroic or "the star," but they do seem to have a low-key realness.

Nate Drake (from Uncharted) is probably my favorite hero. Video game heroes might be generally more relatable because you play as them, so more is invested. Overall, two things draw me into the story and establish empathy. One is sarcasm/humor. (I don't bond to tragic heroes nor to serious ones, regardless of how nice they are.) The other is seeing them endure a struggle, especially if they do so with that sense of humor to help even as they falter. (But they still should struggle and show humility.)

That's interesting about Saitama. I've only watched the anime and not read the manga, but I find him hard to grasp because it's not a traditional hero... So while I can sort of relate to his day to day stuff and I really WANT the other heroes to see that he's the greatest and not someone they can ignore, I don't really "get" him. He only wants to be in the guild because of the money, he seems to sort of want the notoriety he deserves but then he doesn't (ceding reputation to Mooman Rider for example and pretending to be a sort of a villain at times). I don't know if he wants to help people at all or is it ONLY that he wants to fight someone who takes more than one punch and all else in life is ennui? But even then he doesn't fight good guys so it's not ALL about the fight.