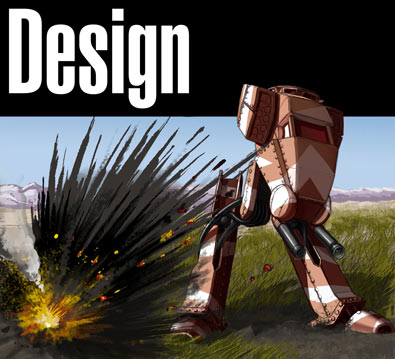 When you're creating the look of your fictional world what can really help you in the design of the look and feel of it is coming up with a “Design Language”.
What I mean by this is the theme of the overall look of things and the reasons for it. For my own comic, Pinky TA, the main influence for the designs is that the comic is set in the 1920s: so technology is powered by diesel engines and is rather rough and not very advanced.

Pictured is the Tromper mech from Pinky TA (or SSV). For this I wanted something that looked funky and technologically advanced while still showing its crude origins. The purpose of this mecha was as a scout vehicle with some offensive capability. So the idea was to make it look heavy and battle-worthy with its large legs and heavily riveted Armour, while also fairly slim and slightly streamlined. I originally gave it two fixed 50 cal water cooled Vickers heavy machine guns and two pods carrying a number of unguided high explosive rockets; all simple weapons technology that was available in the 1920s and perfectly suited the role I needed for the vehicle.
I went through a number of different designs before I came upon the right look and configuration. 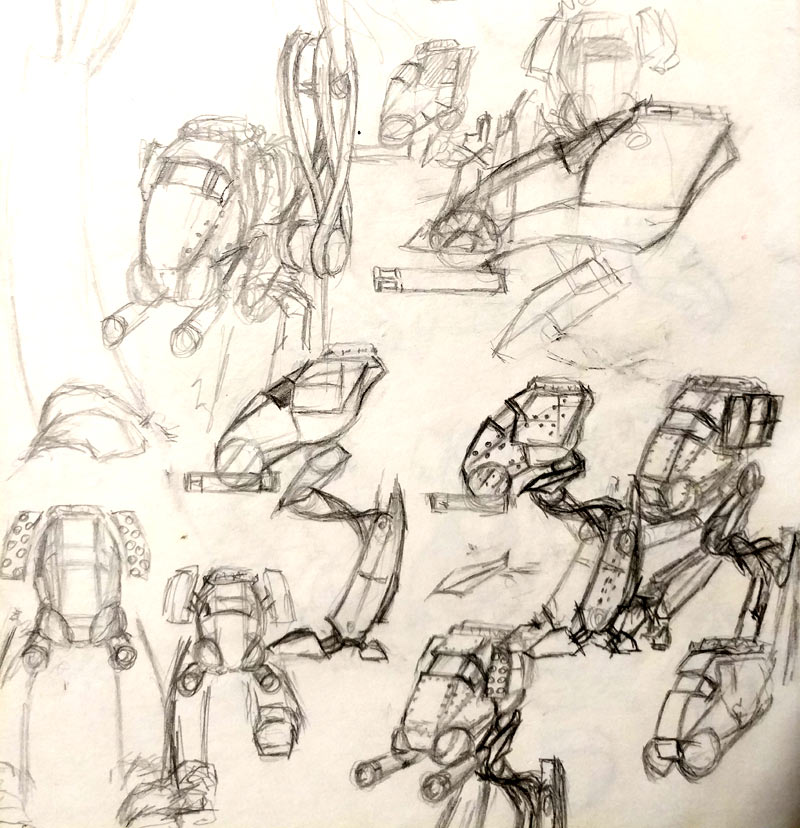 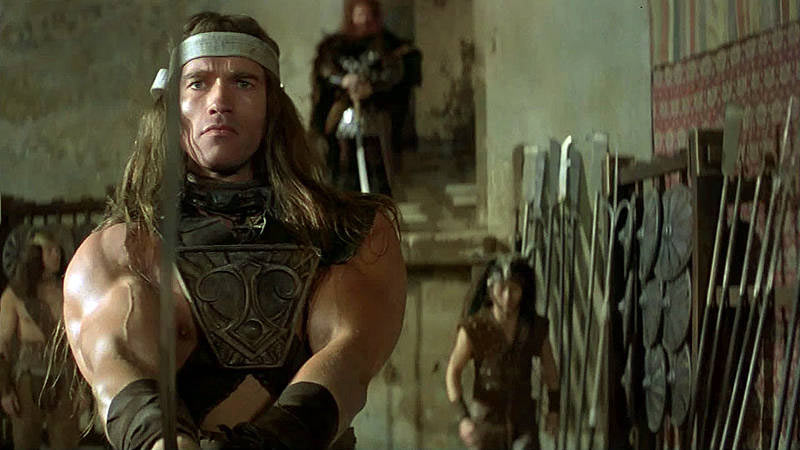 Another great example of a design language in action is the movie Conan the Barbarian.

The story is set in the real world rather than fantasy, but in a fictional prehistory, so they had to totally invent a look of the prehistorical aesthetic that looked plausible rather than silly and foolish like it often did in lessor fantasy films. They took their influences from ancient cultures like the Egyptians, Mongolians, Minoans for example and posited what they'd have evolved from. As a result the world presented in first Conan movie looks real.
For the actors and scenes they took inspiration from the fantasy paintings of Frank Frazetta, this gave them the masculine, muscular, earthy, heroic image that perfectly fit with the theme of the film. Frazetta himself based his own aesthetic on the classical heroic imagery of the Renaissance, which was in turn directly influenced by the heroic sculpture of ancient Rome and Greece, which was often based on the prehistorical mythology: the same sort of world Conan is set in. 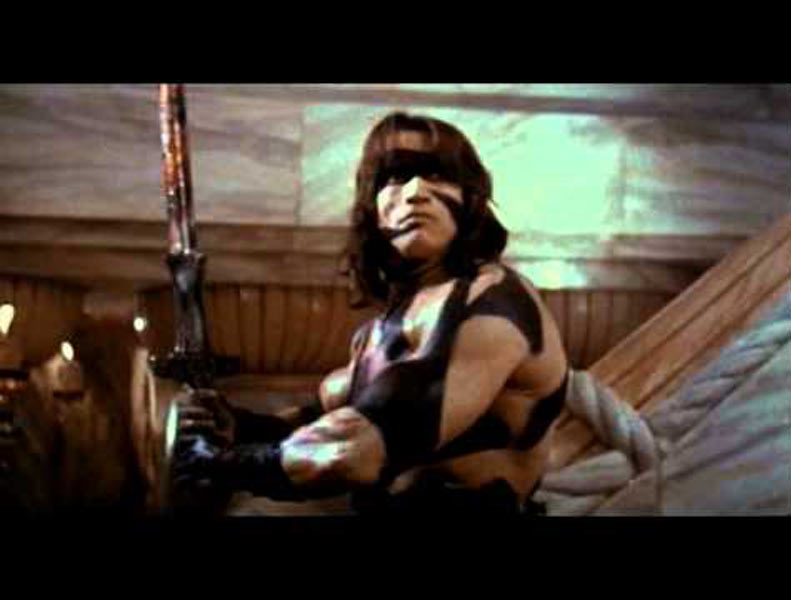 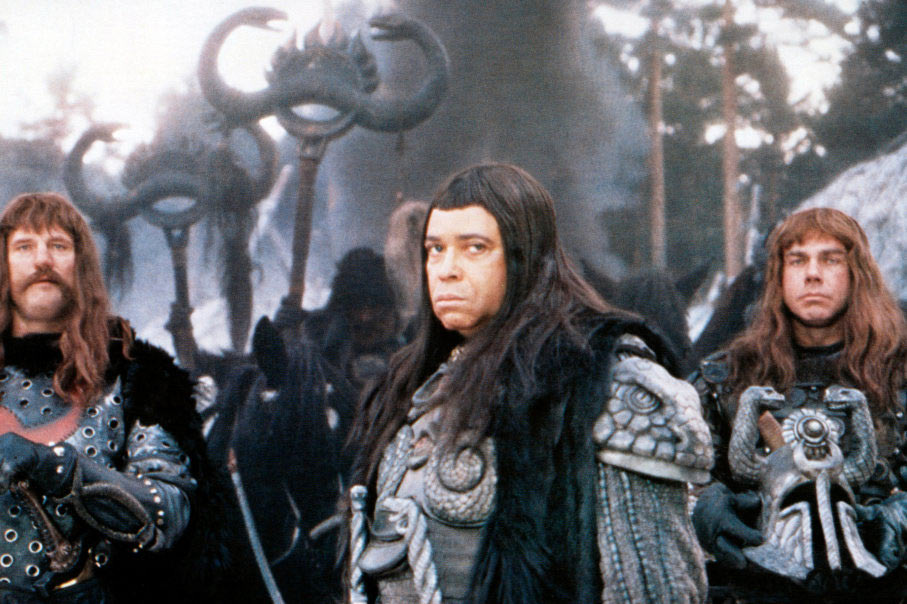 What makes up your design language?

@Falopian- some styles of architecture are always a bit too "futuristic"... Like the modernism from the 1920s. Buildings are STILL made in the style now and STILL considered ultra modern even though it's almost 100 years old. It's basically THE default style of all ultra modern houses made now.

Syd Meade was a genius.

One amusing aspect of design languages is there is a delay between new design languages coming on the scene, and what the average person will actually accept as familiar. There are several times when I have developed design languages for science fiction games, and I started with the premise that architecture of the future would be an evolution of the most modern architecture of today. So, I would gather references of actual buildings that have actually been built in the real world, which were based on the design principles of Parametricism. And every client would say every time that the designs looked "too alien, too bizarre to be believable," etc. And I would think: "you realize that this 'alien' building actually exists in the real world, and people work there every day?" But to no avail. They always went back to regurgitating the same Star Wars-style design cliches that came on the scene 40 years ago, because that was familiar to them.

Another project that I gain inspiration from is the movie "Dune" by David Lynch. The visual design team on that movie made a real effort to develop a unique, differentiated design language for each of the cultures that showed up in the movie. You could really tell which faction everybody belonged to just by the decorative arts of their architecture and clothing. When developing a visual language, the general rule of thumb (at least in concept design for gaming) is that design languages shouldn't stray more than about 20 percent from designs that we will all recognize from the real world. Otherwise, the viewer will become so distracted by trying to figure out the bizarre designs of your I.P. that the suspension of disbelief will be broken. For example, in "Mindfold," I draw from Aztec, Thai, and Chinese vernaculars, and mash them up. In "Tusk," I make unholy alliances between Celtic, Cambodian, and Hindu decorative arts/architecture.

I steal whatever looks good and just throw it together.