Built to Last or Not 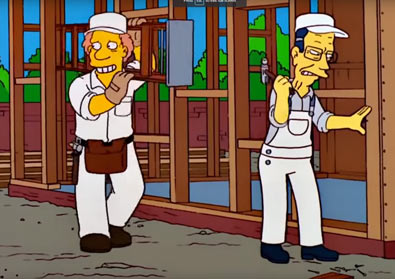 I remember way back in the day, hearing a writer on the cartoon ‘King of the Hill’, who'd been a writer on ‘The Simpsons’ saying that on the Simpsons, is was all about how many jokes you could get in a scene…in a page…and even how many jokes you can squeeze into one line of dialogue. It served the Simpsons very, very well, and is a testament to the brilliance and hard work of the comedy writers who've worked on it over the decades.

But on King of the Hill, the writer said, there was a conscious effort to slow things down, take it easy, not be in a rush for the next joke. It worked for that show; King of the Hill would not have been right with that breakneck-speed, rapid-fire joke-type style. It might have been a great show, who knows…but it wouldn't have been the same.

Old-style sitcoms - pre-Seinfeld and pre-Simpsons - are often incredibly slow-moving in comparison to later stuff. Some of them still work. The few episodes of Family Ties and Cheers I've seen in recent years were still pretty good! Slow-moving and behind the times, sure. But the characters held up. Others I've attempted to rewatch…not so much. Painful to look at, despite the talent at work (I'm lookin' at you, Night Court!)

I think some of today's shows - mostly the big hits like Big Bang Theory - will not age well. They may be more modern, full of current references and pushing the envelope with crudeness and nastiness, but they're highly formulaic without the strong characters and undercurrent of humanity that make a great, lasting, quality show.

Or so I am musing today, anyway!

A lot depends on the style of humor and your audience. I think some people will opine something hasn't "aged well" when they really just mean it doesn't suit their own tastes and probably never did; if they'd watched it years ago, they probably also wouldn't have enjoyed it either. If they did, it's worth considering that their own lives were different at the time, and their tastes will have changed since then. These shows listed are all very different approaches to comedy and very different individuals contributing to their scripts and, thus, will give very different experiences. Sometimes I'm in the mood for the TV equivalent of junk food and don't want to think, while other times I want to be challenged. I wouldn't look for the same thing when I'm in different moods.

I just got through the old 70/80's show taxi, and I feel like it's held up very well, but that may be because of its premise and characters which feel timeless aside from the fashion of the time lol. Comedy is Tricky thing and timing/pacing is a major part of it.

Try keeping up with the one liners Groucho would often drop in nearly everything he did. Couple of great games how appearances on YouTube.

There were a lot of Vaudeville veterans in the 1930s-50s who did fast paced comedy. In addition to the early silent comedies where at times you can't catch a breath between punchlines. Funny Mel Brooks should come up since he did a lot of writing for Your Show of Shows and that experience along with Carl Reiner's became The Dick Van Dyke show.

I love Key and Peele. Most of the topical sketches probably won't hold up over time, but there is a need and a place for the "fleeting" humor as well. It also provides reason to study history and context. Times change, but you can appreciate "old" humor (especially smart old humor) if you do a little research. (Or read the footnotes, like in Gulliver's Travels.)

Monty Python's Flying Circus made a lot of topical references. They're all forgotten, but the cheese shop or dead parrot sketch are eternal. Much of the context of the Spam sketch is unknown today but it's still outrageously funny. (Due to wartime rationing that continued into the 1950s, the most common meat was Spam. So they did everything with it. Hence the restaurant in the sketch where everything has Spam in it to ridiculous levels)

I tried watching the movie Ten From Your Show Of Shows because I'd heard so much about the classic comedy show, Your Show Of Shows. Yikes! I was not expecting the glacial pacing of this film. (Admittedly if I had just divided the running time by 10 I could have known the average length of each sketch, but I didn't.) Maybe I'll try it again now that I know not to expect a joke every minute.

The type of comedy really makes a difference. Physical comedy and wordplay are more timeless and also more accessible to a variety of viewers. Topical humor, political humor, and pop culture stales quickly. (Not that those things don't have their place. They are enjoyable for their particular target audience and brief time of relevance.)

And then there are shows that are of their time but still so prescient like "All in the Family". And timeless classics like "The Honeymooners" or "I Love Lucy". You know the put in as many jokes in a moment does have roots in silent comedy shorts like the one Mack Sennett cranked out like The Keystone Cops. Read the book "Silent Stars" by Jeanine Basinger. Gives a great account of the industry through the great stars and talents forgotten today. Gotta look back to understand the present.

2 and a half men was definitely not built to last. The Big Bang Theory relies too heavily on character tropes rather than actually building real characters, much like traditional British sitcoms in that way, it has a place and a purpose but goes stale when it's overdone because characters cannot escape their trope without self destructing- so you can't have real growth. (I'm being SUPER simplistic here and that explanation is probably pretty untrue but it sounds good)