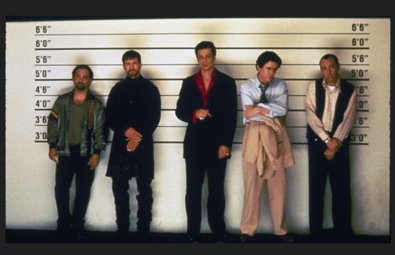 This time, how about we talk the fascinating device called the Unreliable Narrator. For anyone who doesn't know, this type of narration (usually first person in prose, but not necessarily) tells the story in question…but is not necessarily giving an accurate description of what's going on.

The narrator may be evil. Or crazy. Or an alien. Or narcissistic. Or just lying. Or have some other kind of twisted notion of reality that departs from the usual. I don't remember what the story was where I learned of this in high school, but the idea of it fascinated and stunned me at the time. “So…the story isn't necessarily being told truthfully?”

Such a cool idea, and it was left to the reader to interpret what was or wasn't true, and to wonder at all the ambiguities that might be in there. Exciting stuff!

It can be done in other mediums too, of course. The twist ending of film “The Usual Suspects”, that was ripped off endlessly afterwards made use of the device. Another, lesser known one with a pov twist was called “Frailty”, a horror/psychological thriller directed by Bill Paxton (rip). I don't want to spoil it, but there's more going on than first meets the eye.

The technique in Frailty involves what you see, and don't see, and the assumptions the audience will make based on what they see or don't. I don't want to get any more specific than that, but this brings us to comics.

Can the unreliable narrator be used in comics? Of course! There can be as much depth in a graphical story as in any other medium. It can be a more obvious “twist” kind of thing, like in the movies I mentioned, or can be more subtle, with the readers questioning whether the pov character can be trusted.

I believe there's a good way to do an Unreliable Narrator Twist, and a bad way to do it. What do you think? If a story is presented one way, then turned on its head in the last couple pages/minutes, is that a “cheat”? Is it acceptable? It probably has something to do with whether there were “clues” scattered throughout the story that (hopefully) weren't picked up on the first time through, then become obvious after the ending and upon second viewing.

I don't know if I'm right about this, but I interpreted Deadpool from, well, “Deadpool” to be an unreliable narrator. His ultimate, perfect relationship, the powerful but somewhat corny and dopey version of Colossus…it played to me like Deadpool's version of reality. It matches his fourth wall-breaking character.

Have you ever used an Unreliable Narrator in your comic, or seen it done in comics? Nothing's coming to mind offhand, although I'm sure it's been done, certainly in old horror comics at least.

This has been your Thursday Newspost - or so I'm going to claim!

"Have you ever used an Unreliable Narrator in your comic, or seen it done in comics?" A lot, but I did a horrible job, because everyone believed the characters's point of view without checking their sanity before...

As usedbooks mentioned, the "Rashomon story" (after the film Rashōmon and its multiple differing accounts of the same events) is a potentially fascinating approach to narration and directly questions how reliable any narrator can be. It's always interesting to think about how the same things happening can be so very differently interpreted and remembered by different people with different circumstances. It's also worth mentioning that even in some pop culture stuff, there is an (often accidental or incidental) impression of unreliable narrators. As you've mentioned, Deadpool is one such example, but one a lot of people don't realize is Twilight. Yes, the infamous Twilight shows, later on from accounts of Jacob and Edward, that Bella...may just be a very unreliable narrator, and she's already shaped the reader's view of most of the story. Probably not an intentional move by the writer, but still pretty interesting to examine if you're familiar with the unreliable narrator.

@bravo - that’s great stuff, yeah. And it works great as a sequence within a story like a mystery or some other ambiguous situation

I love those Rashimon stories! I knew that structure through sitcoms before I ever heard of the film. I think every long running series will do one eventually

@usedbooks - i like that too! And it does seem more likely to work better in a shorter work. Though I could imagine it working in longer form or maybe even a series, if the disconnect was written subtly enough, with interesting enough stories and a nuanced enough character(s)

Whodunnits can use it when they recreate the crime. Like in Clue or Murder on the Orient Express. The people are suddenly painted as how they appear to others as opposed to how they otherwise act. Was used in a couple of Noire movies for flashbacks too. Because no one is who they seem to be in film noire. Not even Humphrey Bogart.

There are also Rashomon stories where multiple witnesses describe the same event to their recollection. I've usually seen this done as an episode in a long running series, usually a case in court. I Love Lucy did it with broken televisions. King of the Hill did it with a fire at the fire station. Rocko's Modern Life did it (can't recall the scenario). It's mostly played for laughs. Characters exaggerating each others' flaws and behavior.

I have enjoyed stories with narrators who don't have a grip on reality. They don't lie, but present the world as they see it. Even better if the end leaves it somewhat ambiguous. It works well in short stories and anthologies. A little tougher in movies. I Kill Giants was the most recent one I watched.