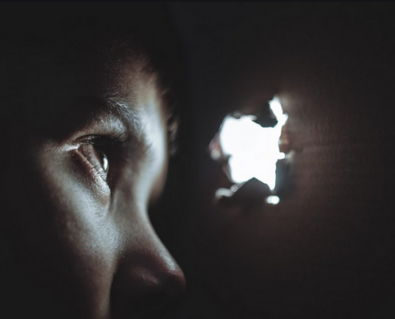 Points of View - part one

In literature, we know there are several points of view that can be used by the author. First person (everything is ‘I did this, I did that’), Third person limited (he does this, she does this, we can see the thoughts of only one character, usually the main character), third person omniscient (we can see the thoughts and pov of everyone the author wants us to), of course, second person ('you do this, you do that'… I don't know how often this is used, but it seems likely to get annoying).

In comics, the standard is to see the thoughts of any character the author wishes, with the use of thought bubbles or captions. POV can be switched willy nilly. So, Third Person Omniscient.

Of course, it's easy enough to make the decision to only show the thoughts of one character. Maybe there's one central character who's in almost every scene. Limiting ourselves to only seeing that person's thoughts definitely puts the story in their perspective and allows some suspense/tension and relatability, so that we only know what they know.

Other than narrating using the pronoun “I”, I'm not sure how first-person narration would be any different. Stories starring Wolverine, and the Conan the Barbarian series (as well as other “noir” characters) have used this device, and it's pretty powerful, for isolating the main character and giving the whole thing a certain gravitas or seriousness. It works!

Doing a second-person narration would be possible too - I imagine not seeing the character (“you”) and only seeing what's going on in front of their eyes. I'm sure that's been done in comics - I've seen it done in film (of the shorter variety at least).

See you next week!

Ah, great article! "Does your comic follow one character?" Nope, and it is a problem for me, extending the story to an obnoxious number of pages. When the story shows more than one perspective (cough, and it's a conspiracy genre, cough), prepare to make a story longer than you expected.

I once tried to write a second person POV story... ugh! One of Edgar Rice Burroughs western novels (The Girl From Hollywood?) started off with second person POV and wisely dropped it for the rest of the novel.

Second-person stories always make me think Choose Your Own Adventure. I started one of those set in my Used Books city. Fun but complicated to write.

Also, first person is tedious and limiting in serial works. It's a tool best used for one-offs. Some normally third-person series experiment with telling a first-person episode, but they don't do it for the entire series. I'm not sure I've watched or would watch a first-person series. I prefer ensemble casts anyway. (Oh, and another strategy is a shifting first-person story, where you follow one person for a scene and switch to another for the next scene. Those can be fun if done right, and take advantage of aspects of both strategies. If done wrong, it is confusing and feels forced/contrived.)

I like the dramatic irony of knowing things the characters don't, and I find that knowing what the antagonists are up to helps set the stakes and create tension. First person narratives are limited and can be challenging to create clarity in the story, but they are well-suited for psychological thrillers, mysteries, and horror. NOT knowing what the antagonists is up to creates that horror/fear feeling. Or not knowing who the antagonist is. Or even if there is an antagonist. The most recent first person movies I've watched are I Kill Giants and I am Mother. The former is a drama where only the main character sees/knows about giants, and the viewer watches her struggle with them. The latter is about the only human on earth, created in a lab by a robot, who ends up questioning the motives of her "mother" and trying to figure out what is a lie and what is real. Both narratives work only as first person stories. They would lose substance with omniscience.