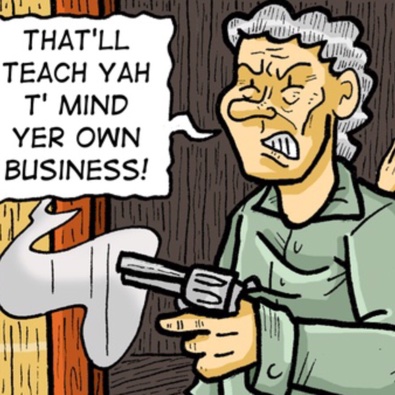 Prospector and babysitter, Isaac Alden, know all about the great tragedy that happened in Grand Lake, Colorado, on July 4, 1883. On that day, Bob Plummer was shot to death by Wilson Waldren, who was also a county commissioner. This shooting shows the lack of impulse control of some of the folks who moved to Grand Lakes from other towns. Grand Lakes has its own share of troublemakers such as John G. Mills, one of the town’s elected officials, who rose to prominence after moving from Wyoming. Now, the town is about to learn the truth about Mills’ tumultuous past.

The comic uses a full-page, colored format. Characters are stylistically drawn and the writing makes great use of regional English accents.

Take a digital trip to the past in Grand Lakes, Colorado, and read The Shootin by arborcides, rated E!