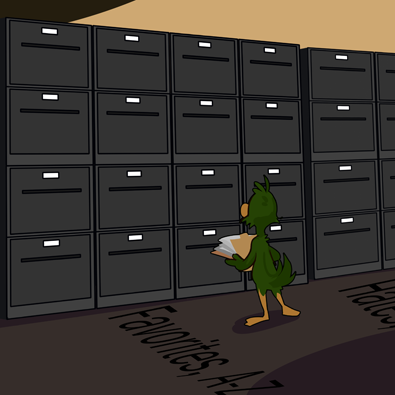 What is a character? A miserable little pile of traits! Except no, there is more to a character than a collection of likes and dislikes. There are varying opinions on the importance of character versus plot, with some authors viewing all characters as a mere tool to drive plot forward rather than living denizens of a world created by the author. Others believe that a plot can generate no interest unless there is a connection to the players within it. And of course, you can make that argument with some very popular works to bolster both sides.

I personally lean more toward the “character over plot” side. I think it is absolutely important for plot to be consistent, make sense, and provide proper conflict and interesting sequences for the characters and thus the readers to experience, but I am also willing to forgive that a bit if the characterization is good enough to (almost!) make up for a few plot holes. If you're just not thinking of creating deeper characters than what serves your story, you probably aren't going to get much out of my discussion today!

What makes a character compelling? Being a little more than a cardboard cutout the author uses as a soapbox or self insert is certainly a start. I don't think a lot of writers really understand what fleshing out a character truly entails, as I see a lot of half-hearted attempts at characterization carried out in what amounts to dry and informal dossiers. I can't help but grit my teeth when a story starts out with character profiles before we reach page 1 of the story. Yes it's nice to have a full-body reference and all, but these are things the author should be keeping on hand for consistency, not offering up to the audience as a quick and dirty rundown. I shouldn't (and you shouldn't!) defer to a character sheet to get to know the characters in your work. These things should be evident through context. Don't assume your audience is too stupid to pick up on things. Informed traits are BAD for your characters. We should see those clearly play out in the story. “Show, Don't Tell” applies to characters too!

I do have a character wiki with short bios for each character. As a rule, I will not include a trait that has not been explicitly seen in the comic. I'd rather that things such as favorite color, animal, pop culture, sexual orientation and food preferences be something that the audience learns about the character through interactions and reactions. There are so many subtle things you can add to your character to make them interesting, and it's much more fun for your audience to examine, speculate on, and make up their own mind than for you to outright tell them. There just seems to be an idea that you need to know and document every tiny detail of your character's preferences to have a well-rounded and realistic character. None of that matters. It's minutiae, and unless it comes up in the story, it's unimportant. Do you know the favorite food, band, movie of all of your closest friends and family? You might be able to guess at ones that they haven't told you outright. You don't get these details because you interviewed them extensively on a bunch of useless personal trivia. You get context clues and some of them might be a little skewed. They might have movie posters they just thought looked cool. They never heard anything by that band, the shirt they're wearing was secondhand and comfy. Yes, they loved that candy as a child but are avoiding it now because someone they spend time with has a peanut allergy.

What does your audience get out of knowing what flavor of gum your main character likes? Other than maybe going “Oh that's my favorite too, I can ‘relate’ to this character now.” Which brings me to my biggest beef with character profiles in lieu of characterization in-story is how often it feels as though it's the author's personal preferences, broken down across different characters. Characters need to feel relatable, we've all been told, so picking things that you relate to personally in your process of adding flesh to the bones of your character seems like the natural thing to do. My advice is to avoid that and look outward. Observe other people. Base (loosely!) on friends, family, acquaintances, maybe even actors or people from history, a quick biography show can be a great source of inspiration. Don't give them a 1-1 ratio of a real person's traits, mix that stuff up! Add contradictions, hypocrisies, flaws. No person is 100% consistent all of the time. Popular writing advice states that adding flaws helps you avoid “Mary Sue” characters, but that's oversimplifying a bit. Too many people take that to mean grabbing a handful of random problems and chucking them in the mix with no consideration to the character one is creating. There is much to be said about how backlash against the Mary Sue has created a lot more problems than the issue itself!

I don't want anyone to come away from this thinking that if they did a character profile or a bio that they are a bad or lazy writer. I can appreciate the effort that goes into them, and done right they can even be fun, even when there are times it looks like the details were spun out on the fly. If you can't tell me right this second what song makes your character cry every time they hear it, that doesn't make you a bad writer. That doesn't mean you don't “know” your character because you haven't defined every single minor detail!

So should you just ignore these little details? Well, no. As both a writer and a roleplayer I know that you can use little traits and preferences as a starting point to help develop their characters if you use them to paint a picture rather than just being empty trivia. If there is a song that makes you character cry every time, figure out why, what that says about them and how it has shaped them as a whole. If they have a favorite color, work that into the art. If they like blue, show them wearing a favorite blue jacket or driving a blue car. If they have a favorite gum, maybe have a character who cares about them get their favorite brand for them all the time. Work all those details into the larger portrait of the character so they become part of the tapestry of the character and their story rather than just non sequitur trivia.

The character traits you give to a character should help build who they are in at least small ways. Just as a story thread that goes nowhere and serves no point in the story wastes your reader's time, traits that don't tie into the whole of a character and the story they're in are also a waste. Your readers are all building a portrait of the character you are writing in their mind as they read and get to know them. Make sure as they try to put all the pieces together and puzzle out your character that all the pieces fit and help to make a complete picture. If they have contradictions, we should understand why. If they have preferences we should feel these are part of their image and person. As anyone who's done a model or put together an IKEA desk can tell you, extra pieces that don't seem to do anything or serve any purpose don't help, instead they frustrate and confuse the hell out of you.

Great article! About the sin of character's extra info, I'm a huge sinner. I research and write for months only to put together the background story, building the world before adding the characters. I take my time when I'm writing about a character, creating her. I need to "get to know" the characters and decide if I'll spend my time with them XD I'm sharing my vital energy with those illusory persons, using my time and energy to create them, so they have to convince me first they're should be alive. Also, I have to like them during the process. And, finally, I check if they're useful to the story.

Great article. I've said it before, but having fairly detailed bios of your characters is pretty much essential for any character-based stories (and even non-character-based stories can benefit from it). Pretty much every character's life is joined in medias res (even if the plot isn't), so having a good grasp of where characters are coming from--and the ability to casually toss out suggestive tidbits--creates a sense of history and being for the characters. And having a "set" history helps prevent any plot holes that might come up, as well as potentially open up avenues for stories that you might not have thought of until the characters start bouncing off one another.

This is a great article.

Oh, and the weird thing is sometimes my characters develop their own little extra traits from seemingly nowhere. I'll be writing a scene as it comes naturally and realize after the fact that the character has developed a pattern. So apparently they have a favorite color or restaurant or hobby or something. (Other times, it's as you said, *I* know they have a hobby/trait, but it's just background noise in the story or little Easter eggs that make it fun for me even if no one notices.)

Good article! I tend to have a short list of drives behind each character that I can picture to quickly get in the zone when writing their actions and dialogue. One of my newer characters, Jack, for example, I think of as "Ruthless but carefree, motivated by anything that is fun. Likes shiny, new everything. Self-centered in all relationships with others. Fancies himself a modern pirate." That description is enough to keep him in character when I'm writing.