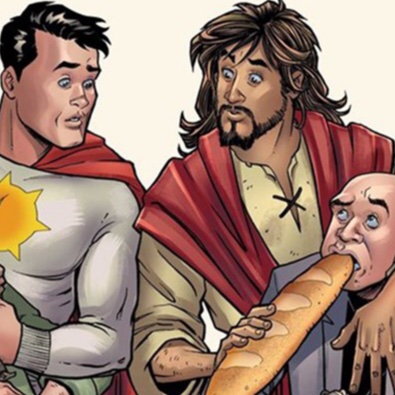 A comic titled “Second Coming” featuring Jesus, the son of God, and a new superhero named Sun-Man is looking for a new home now that it is no longer being released by DC Vertigo Comics. The superhero was pulled because online critics called it blasphemous and inappropriate to show Jesus Christ depicted in a comic series. It was compared to the controversy that would have ensued if a comic about Buddha or other religious figures had been released by the comic studio.

The comic was written by Mark Russell and the art is drawn by Richard Pace. The announcement was made on their Twitter account. The comic story is about how Jesus teams up with Sun-Man and learns what it means to be a true Messiah of man. People on an online petition launched on CitizenGo were upset that Jesus was portrayed as a clueless superhero sidekick. The outrage came before anyone had a chance to read the comic.

This news comes days after DC announced it would be pulling back from releasing new titles this year after falling sales with the direct market because of an over saturation of new comics entering the market.

When I heard about this book, the first thing I thought was, "It can't be any good." With Jesus as a character, the creator walks a fine line between him as a parody of how he has been described in the Scripture (like, he'll turn water into craft beer this time) or in contrast to how he's been done before ("He was the Prince of Peace before, now he's coming back as…"). Both of these paths are pretty obvious and we can already imagine how they're going to go. It would be ridiculously hard to give a reader something compelling and interesting which wouldn't alienate either his followers or those who think of him as a fictional character. You'll lose a substantial percentage of your potential readers right from the get-go. I bet DC green-lighted the book in the hope that it would be compelling, but it wasn't. And like El Cid said, it didn't have a chance in this saturated market. Now, DC can say it was too controversial… "You couldn't handle it."

If you're trying to have a real conversation with someone, you do need to make some effort to try and understand what they're saying rather than expect to be hand-fed every cognitive step of the way. I'm pretty sure my point was made clearly enough, and I know you're not stupid, so I have to assume you're either not making a good faith effort or you're actively trying to be obtuse right now. If there's something specific you are genuinely having difficulty understanding, you're always welcome to PQ me for a clarification.

@ El Cid: Why do they need to impress you? and I still don’t see why Jesus is off limits unless you also show Muhammad in an unflattering light as well… am I not getting something here?

@Albino: Comparatively speaking, yes Christians have been absolutely more tolerant when it comes to depictions of their prophet in art and drama. No one's going into a witness protection program because they drew a cartoon of Jesus sodomizing one of his prepubescent wives. None of these dangerous Christian extremists you pretend to be concerned about are going to shoot up a printing press in downtown Boston with AK-47s because they published an unflattering Jesus caricature. There is a tangible difference. You're drawing a false equivalence when you ignore that there are degrees of tolerance; it's not an absolute black-or-white type of thing. And if you don't like the word "cowards," then there are other words for people who pick on someone who they know will not defend themselves. Pick a different one. But whatever you call them, they do not impress me.

@Albino Ginger Terrorist Groups are always just a small group, they are rarely, if ever the majority. Regardless of what their goal is.

response to El Cid: you are probably right the falling sales are the relevant part of this story; But then you go on to say how Christians are “tolerant” as apposed to muslims who are intolerant? don’t get me wrong, Islam is a horrible religion that gets its followers to do horrible things, but so is Christianity. What about “The Army of God”, “The Phones Priesthood”, the “L.R.A.” just to name a few Christian terrorist groups. furthermore I don’t know if the creators of this comic were trying to say anything about Christianity or not; but why is it that if anyone points out flaws in religions that have personally affected them and there loved ones, they get called out for being “cowards” because they did not happen to say anything about Islam when islam had nothing to do with the conversation to begin with?

Premise sounds similar to one of my favorite books, Christopher Moore's "Lamb: The Gospel According to Biff, Christ's Childhood Pal," which boils down to a buddy roadtrip through the major religions of the time (via the three wise men), where Jesus tries to figure out what it means to be the Messiah, since his dad never gave him any instruction. Biff, his mischievous, womanizing BF, goes along with him, so that, according to Jesus's human dad Joseph, he can teach Jesus what it means to be human. One of the funniest and most-touching books I've read--and only sacrilegious to those with no sense of humor. (For a taste of the book's humor, check out https://www.goodreads.com/work/quotes/3346728-lamb-the-gospel-according-to-biff-christ-s-childhood-pal.)

That would have been interesting. A comic like that would fit right in here on the DD. I would read it.

* very late post edit: Meant to say "the prophet Muhammad," not "Allah." Clearly I flunked out of Islam school.

I'm with El CID and Genejoke on this one. The whole point of this new Vertigo lineup seems to have been to piss in the cheerios of certain groups, so why stop with the one that's already dealt with worse stuff (judging by the summary) like Dogma?

I think with right spin the same people would.be outraged that DC refused to print a comic that prompted biblical teachings and strong Male gender roles... wag the dog..

This is an entirely fake controversy. I think the last bit about them not publishing because of falling sales is the relevant part; they wouldn't have released it in any case, so why add this extra layer of "oh, we were really gonna do something controversial, but then we didn't because it was too controversial?" Bullshit. If they wanted to do something controversial, they should have let their nuts hang and done a comic featuring Allah. That would have exposed true religious intolerance. But they didn't, because they're cowards, and Christians are an easy target ironically due to their tolerance. Yes, they're going to complain when you do something likely intentionally aimed at annoying them, as would any other group of humans, but they're not going to bomb DC headquarters over it. They're just not going to buy your garbage comics, as we all would if they did something intentionally racist or homophobic. What, exactly, is the story here?

If Trey Parker and Matt Stone can get away with it....... smh

What makes this anymore inappropriate than something like Bubba Ho-tep or Abraham Lincoln: Vampier hunter? I really wish evangelical nuts would just stop. that being said, I think DC/Vertigo did the wrong move here. They could have just released it and made a killing off of all the rage exposer from the religious.

A comic about Allah would have been less labor intensive, because nobody would be allowed to draw him. XDDDD

This actually sounds like some thing the church would dream up ..like the comic manga bible or some of there summer bible school stuff.. for years I've been warned to not have jesus show up in my comic that I would have backlash

On the other hand, in this story God thinks Jesus failed, but wants him to be more like a superhero... Can you think of a more stereotypical storyline for a comic book fanboy to write? "They're not silly stories for juveniles! They are religious documents!!!" ;-)

Do none of you know a religious person? Jesus is not a "character" to a Christian. They take him very serious. It probably would have worked better if they had picked a fictional messiah, say... Bob. People would still have gotten upset, but not as many as using Jesus. Just imagine if the writer had used Mohammad instead of Jesus?

To be fair someone probably realised it wasn't going to sell well and pulled it because of the oversaturation and now the makers are trying to drum up interest.

Eh? Hardly controversial to begin with. Fictional character gets in a comic for the 10000th time.

Probably a good idea. The amount fanboys and girls have invested into Batman and Superman is NOTHING compared to that invested in Jesus as a character. They should have used Brian instead, that would have been Waaaaay better!

There was a Swamp thing arc back in 1989 that was pulled because Swamp Thing was going to interact with Jesus, and the cover implied that Swampie would become the actual cross. The Rick Veitch script is available online to read.