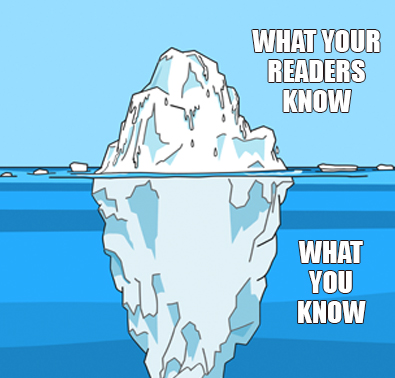 In a nutshell, exposition is a big ole mound of information that the author wants the reader to know before they move on in the plot. It often gets a bad rap but that is usually due to it being used incorrectly. There is definitely a place for exposition so here are some handy tips on where and when to use it.

Filter exposition through a character
A good way to engage a reader with your exposition is to filter it through another character’s experience. It helps soften any potential jarring and allows the reader to get closer to the character delivering the information. You can add small character moments and comments that reveal what the characters think of the information itself making it more interesting.

Show the tip of the iceberg
You don’t know everything that is going on in the world on a day-to-day level and nor do your readers need to know all the things. Give them just 10-20% of what you could give them and leave the rest up to their imagination. This is particularly useful if your filtering information through another character. They’re only going to have a piece of the puzzle. This allows you to build interest in the conflict, the world or other characters without getting too bogged down.

Shoot first, ask later
When your delivering the information, have the characters be doing something. When you explain something to someone, generally it is over food or drinks, or on a long walk. Doing this keeps the momentum of the sequence moving forward and allows for interesting camera angles to keep the pace up.

Rule of progression
If your struggling with exposition, try following this rule:

The least important facts come first > the next most important ones comes after that and the critical facts, including secrets come last.

How have you handled exposition in your story? Do you have a strategy for dealing with it? Let us know in the comment section below. And join us on Sunday evening for our Quackchat at 5:30PM(EST)!

Not the best fit for comics but a great tip I picked up for writing is to integrate exposition into the action. "Bob shoved aside several vials of isotopes as he dived over the desk. He huddled behind the bulk of Ellen's industrial centrifuge, its loud whirring only broken by the high-deep burping sound of methane blasters." or whatever. You've conveyed quite a bit about the setting there while the audience is mostly focused on "Holy crap, who's trying to kill Bob!?".

Great article! It has everything to do with escalation (a big issue for any writer, vet or beginner).

(But maybe not before he tells the audience some crucial point for later.)

Honestly, it's not unnatural for BIG points to be ignored by characters. The creator knows the importance in the story, but the characters don't. Maybe the intricacies of the combustion engine will play a big part at some point. The characters wouldn't know. They'd tell the exposition-dropping geek to shut up already and let them drive.

@bravo: I don't intentionally dodge exposition. Unnatural avoiding it is an even worse offense than unnatural info dumps. Lol. I end up cutting a lot though. My first drafts become too involved and meandering, and I ask myself "What is necessary to THIS part of the story? To this arc? What is natural conversation" And super important big world information goes into the proverbial waste bin or becomes abbreviated. Maybe the characters just shrug it off or say it's something to discuss later because they are more focused on something else.

My issue is not finding good ways to "naturally" fit info in. Usually it isn't a typical exposition I'm trying to tell but its cousin, the recap. My story needs more recaps, imo, and I'd love to make them organic. (I actually have a character-centered recap coming up soon -- by use of dream sequence. :P)

@usedbooks: the only versions of "nothing " I'd even consider using are the "Airplane ": Hospital? What is it? A big building with patients, but that's not important now. Or "The Neverending Story " version which I have used: --but that is another story and shall be told at another time." I usually do that to link my different comics since they all take place in the same universe.

You give me too much credit! I don’t know that much at all! I’ve had to do exposition dumps a good number of times myself. I generally try to do an image collage or something visually appealing. I try not to dedicate more than one page if possible and try to also have it reminded here and there in the story so if you can’t take in the exposition dump earlier you’ll still be reminded later and not super confused. On the other hand I’ve yet to reveal the bulk of how the world itself works. That stuff won’t come up as an exposition because the chars are accustomed to it. So it’ll come up in much smaller pieces as the story unfolds. Which I prefer so audiences can fill in blanks too.

I suck at exposition. Luckily, I don't create fantasy or sci-fi worlds that require explanation. I would love to create stories with secrets and double agents and betrayal, but I'm not good at nuanced writing.

Anime/Jrpg is notorious for getting a case of the "nothings." When a moment comes to reveal some secret or crucial information, a character will ask about it and the information-holder will say "It's nothing." It is hilariously bad trope writing. Sitcoms do it too. They (attempt to) generate interest in something by "teasing," and it generates mostly eye-rolls. In my own writing, I strive to avoid "nothings." If a topic comes up, the characters discuss it. If it alters story/character dynamics, good. That's fine. Let the world change.

I've worked with limiting information to the reader and character a lot. Interstellar Blood Beasts and Mask of the Aryans had detailed alternative settings that are only ever hinted at. The characters took their world for granted and I tried to show information rather than describe. But science fiction requires some exposition and then that's what wild ass guesses and theories are for. Deal with the unknown and you gotta make guesses.

My favorite example has always been the internal combustion engine. Anyone know in detail how it works? You can't explain it so why do you need to explain the inner workings of something in your world? You could describe maintenance procedures to advance the story and set up a character's routine or as an action while characters discuss plot happenings. But the world had piles of stuff your characters may not know so sometimes they may research stuff or discover bits and pieces. You can reverse progression by having them discover the big thing and have no idea what it is until they put it all together.

My stories almost always involve a lot of secrets some characters know, but the reader doesn't. I'm never quite sure how it turns out. Some people can guess the secrets in advance, others are constantly confused, others seem to be able to keep up with the current information. My advice would probably be to try to "spell out" and explain any big reveals as fully as possible. For many readers, you'll be giving them too much information- but for those struggling, you might answer their questions.