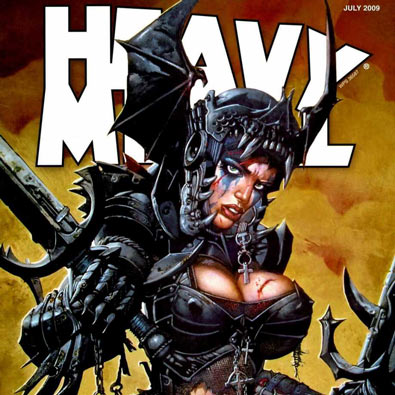 Metal Hurlant: The Craziest Comic Book Series You Probably Never Heard About.
Comic books and graphic novels are considered by many an inherently American form of publication. They became popular in the English-speaking parts of the world (the US and the UK) in the 1930s and conquered the world in the coming decades. They had a few major offshoots though - comics forced their way into the European culture as well, around the same time they emerged in America. Remember, this was long before the internet came along, with its webcomics, streaming, and online casino perks - these styles hardly ever mingled, and there was no exchange in topics and styles. The Franco-Belgian comic books - known as “bandes dessinées” or BDs for short gave the world (especially Europe) several beloved characters - Tintin (by Hergé), Asterix (by Goscinny & Uderzo), The Smurfs (by Peyo) and many others. And then, there was a comic book series that was different from anything else ever published before, both when it comes to the quality of the graphics and the topics covered: a comics anthology of science fiction and horror stories first published in 1974 called “Metal Hurlant”. And it changed everything.

Metal Hurlant (it literally translates as “howling metal”) was created in 1974 by four comics artists: Jean Giraud (better known as Moebius) and Philippe Druillet along with journalist-writer Jean-Pierre Dionnet and Bernard Farkas, acting as a financial director for the publication. These four, collectively known as “Les Humanoïdes des Associés” (United Humanoids) created the publishing house with the same name releasing the Metal Hurlant magazine. The topics covered by this publication were not on the feel-good side, and the visuals were not exactly PG-rated either - some of them would be rated “M” for mature by any rating agency today. The stories were more on the abstract side, with special emphasis placed on artistic visuals rather than depicting action. One famous Moebius series - Azrach - lacked all dialogue, relying exclusively on visuals to tell its story. Over the years, the magazine published many valuable stories from Moebius and Druillet themselves, along with others by Alejandro Jodorowsky, Alain Voss, Berni Wrightson, Chantal Montellier, and many others, and featured cover art by international fine artists like H. R. Giger and Esteban Maroto. The magazine saw 133 issues in its first run between 1974 and 1987, and 14 more after its revival in 2002.

Overseas, and other media

The metal howled in English, too - Leonard Mogel, the publisher of the National Lampoon magazine discovered it while in Paris in the mid-1970s and took it home to the US with him. “Heavy Metal” debuted in 1977, featuring mainly the works of the original Metal Hurlant artists. While the original magazine went out of print in 1987, Heavy Metal survived it by half a decade - it published 136 issues in 16 volumes until 1992. Some of the stories featured in the magazine made it to the screens, too. The first screen adaptation to take on its stories is “Heavy Metal”, an adult animated science fiction anthology movie, followed by a sequel in a similar vein released in 2000. In 2011, a TV series based on the magazine's stories were also produced - it had two seasons with 12 half-hour episodes in total, with a series of European actors in the lead roles, ranging from James Marsters (Buffy's Spike) to Joe Flanigan (Stargate Atlantis), and Rutger Hauer (Blade Runner), along with many others. 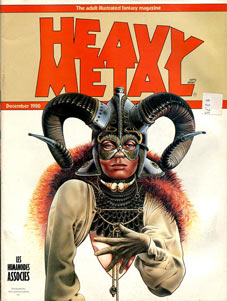 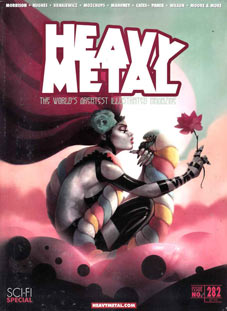 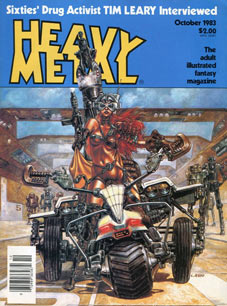 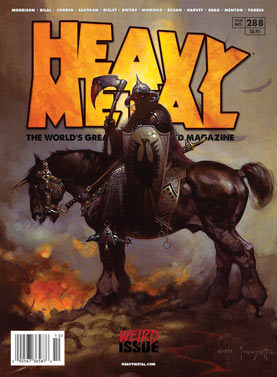 *This is a guest post from a generous sponsor, helping to keep the lights on and the generators running!

Love heavy metal! It's been a major influence on me

I got some old issues of the swedish edition of the comic series that I've bought on a sci-fi convention in Gothemburg. "Tung Metall" was it's swedish translated title. One of my favourite stories in those comic books are those created by comic artist Horacio Altuna. Each story set in the same futuristic city with the same characters, delievering this gut-punching look into civilized man. How one fake city alarm about an imminent nuclear strike can make the human population instantly decimate itself as it runs amok. The morale landscape of having replicant-style androids as property etc. Other stories are beutifully poetic in their style and storytelling, like Philippe Caza's "Springflod" (Swedish translation), where an isolated city inhabited by apathetic, alien folk meets it's watery doom by the song of a buxom siren, calling the ocean to wash away it's walls of sterility. Edgy, poetic and self-reflecting. That is Heavy Metal at it's finest in my opinion.

I loved Heavy Metal in the early days. As a young gay artist, it was refreshing and surprising to see how evenly they dealt with mature topics, and their reasonable handling of nudity and sexuality. They got away from male nudity after the first few years, though, and after a while, a lot of it was very "boobs and robots". There was still the occasional delight, though. I still enjoy Heavy Metal, and though I haven't looked at one in years, maybe it's time to see if they've started being more diverse again. It was really great to know that there was something out there, something popular (that indeed a lot of people have heard about) that wasn't just the same old pitfalls -- mostly professionally or in editorial practices -- from the superhero comics.

The first 'Heavy Metal' movie was my introduction to that universe; I only got into the magazine more recently. I've purchased an ungodly number of back issues from their website, most of which I still haven't read. Moebius' 'Ballade' (November 1977) is one of my favorite entries. Just in general, I like the older issues better; the writing seemed to have a harder edge to it back then.

I remember buying the premiere issue of American Heavy Metal when it came out here in the US in 1977. I submitted my comic "Girlsquadx" to them for publication back in 1993, but needless to say, they hated it.

A fine presentation, what splendid art, I've only ever laid my hands on a couple of Heavy Metal issues, they were hard to get hold of back then unless you took a train to the Big City, which was akin to cut scenes from Mad Max.

I remember liking the *covers* of the Heavy Metal magazines I saw in the comic book shops of my youth. I wasn't allowed to look inside. They were for adults and I was not one. Some of my comic stories came from imagining what kinds of comics might be behind those covers. You can now read and download most of the original run on issuu.com. I've read a bunch of them and, frankly, they're really hit and miss.