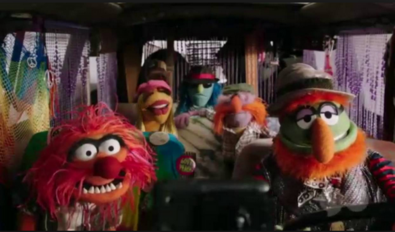 Recently I saw a performance of the Muppets' band “The Electric Mayhem” from 2009. Pretty great!

It occurred to me how many years have passed since the heyday of the Muppet Show in the late 1970's. The fact that this young-ish audience was so excited about this show said something about the staying power of these characters. 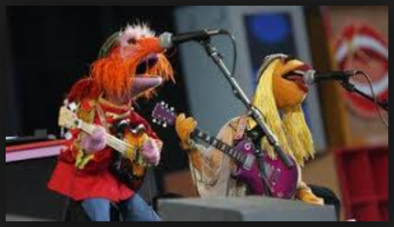 It made me think of the less-than-human but also MORE than human status of the abstract characters of the Muppets, animated characters like The Simpsons, and comic characters like the Peanuts, Calvin and Hobbes, and various Superheroes.

Even though superheroes are played by various actors in movies, the characters transcend those actors by existing in animation, comics, and in other productions played by different actors.

Of course, there's a lot to be said for great actors putting their stamp on an iconic character and bringing it to life, with all the nuance and specifics that only a human can really do.

But when a character is a sort of abstraction, simplified down to its essence, in comics, animation, or puppetry, it's free to express just what its creator wants it to…in a way, that can almost be more real than a real person. 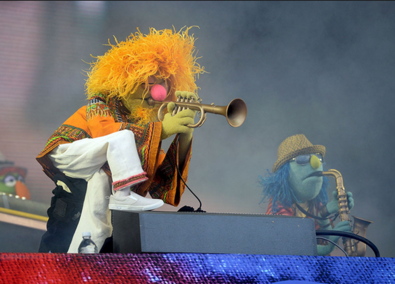 I think the real power in those characters is that they're not tied to a human actor we can see. And that they're boiled down to an essential personality. There's a purity to them when they're written right. It's not that they're a cliche “type”, but they have a simple, focused, core to who they are, and it makes them even better than real. It can put them on an iconic or mythological level.

The best characters do that, I think, and when it works, they're timeless because of it.

@usedbooks hmmm, interesting. Idk how well I do this with my characters

They're so instantly recognisable that it's a bit like meeting old friends after a long time. If they updated their look and style too much it would ruin everything. That's part of why the CGI-versions of the Smurfs, say, just can't hold a candle to the original.

@Gunwallace - yeah, part of the timelessness thing i guess...the human voice actors aren't so timeless. Animal sounds wrong to me too. Dr Teeth actually still sounds quite a bit like the Jim Henson version.

@ShaRose49: Another anime convention is to make main characters very simplified, few details especially on the face. The simple design somehow lets the audience empathize and project themselves onto the character. Objects, scenery, and antagonists will all have more detail and realism.

The new voice of Janice. So un-Janice-like.

@usedbooks I totally know what you’re talking about in studio ghibli films! Animation is supposed to amplify emotions and reality, so it’s no wonder that it seems more real than live action to some people, including me.

@usedbooks - absolutely! so well said. I prefer animation and comics on that level too.

@ozone - yeah they are very 70's looking and still timeless!

@gunwallace - the wrong Janice? How so?

Some people don't understand why I get way more caught up in and emotional watching animation, especially traditional cel animation, and it's the same effect. Instead of being constrained to "reality," art captures the essence of emotion in drawn expressions. It creates a mood and feeling that is pronounced and relatable. Like in a Gibli film, when I character is startled and their hair "reacts" by poofing up. Hair doesn't do that, but that illustration captures the "chills" feeling in a tangible way and is pronounced and relatable.

It's the wrong Janice, man. But otherwise, pretty cool.

Good post. They transcend their fictional origins and become real entities. May people though Sherlock Holmes was a real person... I love the way the muppets still look like an early 1970's band. They've stayed true to the look!