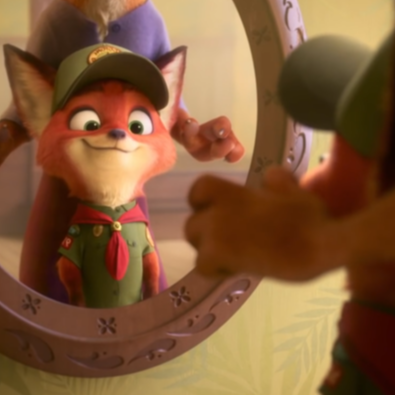 Last week, I was in a classroom and the plans on the desk were to show a DVD. “Oh good, Zootopia it is!” I said as I happily loaded the disc into the computer. I had already seen the movie three years ago when it came out in theaters, so I knew the general story—honor student bunny cop teams up with a rather sly fox and the two figure out a case. What I did not know was that I was about to pick up more details in the story that I might have glossed over the first time I watched it.

First there was a scene where a fox is trying to buy some ice cream at a counter and an elephant says, “Listen, buddy, there aren’t any fox ice cream shops in your part of town?” Later in the film, Nick the fox goes on to tell Judy Hopps how he always wanted to be a junior ranger and his mother scraped enough money to pay for his uniform, but he wanted to fit in even if he was the only predator animal in a group of prey animals. It is followed by a scene where a group of prey animals surround him, begin bullying him, and attach a muzzle to his face. The group leader began shouting, “You think we’d ever trust a fox without a muzzle?”

At this point, I am grabbing the tissue box and wiping my eyes from all the tears and the students pointed and said, “Look! The teacher is crying? Why?” I mean, it was obvious that I was crying to the film, but the fact that some students did not let the serious message sink in, or that some were just laughing makes me wonder if we see things based on life experiences that we have had in our own lives.

I walked away from that movie realizing that serious topics are embedded in many films for kids and that watching them can teach adults important lessons on prejudice and stereotypes that can benefit us all.

So true! It’s amazing when something can appeal to kids and then give something powerful to adults on a whole other level. I wonder how the scene might stay with some of the kids as they grow up? There might be some insight they’re getting unconsciously.

I've always thought that one way to tell the really well-written children's stories from the many mediocre ones is by their ability to captivate us grown-ups as well. This seems to be one of them.