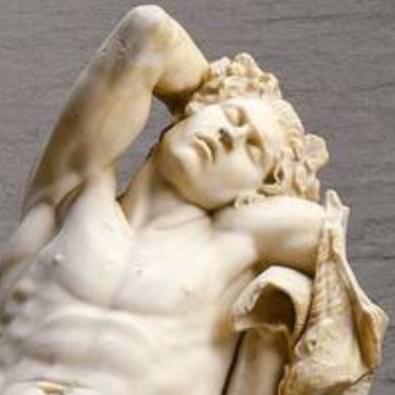 The Sleeping Satyr, the Barberini Faun

Last night, a distressed friend contacted me after a rather dreadful experience. She had just been on the most awkward dinner date with a man she thought was a gentleman based on his good looks and charm, but he turned out to be the exact opposite. Throughout the night, he stopped making intelligible conversation and was tripping over his words. Then at one point she stepped out of the room, only to find their bottle of wine (which was half full five minutes earlier) empty when she returned. She then watched as he reached for her own full glass of wine and drank the entire glass in gulp. He immediately began demanding more bottles of wine! At this point, the best decision was to end the night and for him to go home via ride share.

I kept wondering where I had heard this story before. It was an all too familiar character that I had learned about in elementary school. That was when I realized, my friend had gone on a date with a satyr, one of a class of lustful, drunken woodland gods, from Greek mythology.

It makes sense that characters like nymphs, satyrs, centaurs, and other various Bacchanalian creatures were based on the carnal characteristics of humans. Is it possible that life imitated literature? Or were the mythological stories based on real life when they were written over 2200 years ago?

If I was that gal I definitely wouldn't have shared a ride with that idiot.

Haha! And ladies who drink too much turn into raving Maenads XD ... well Pitface anyway. Funny story: every time I clim the Acopolis I keep half expecting to find a roaming band of Maenads.

I did once contemplate diverting a river to clean our house.

Life inspires myth and then turns around and imitates it.