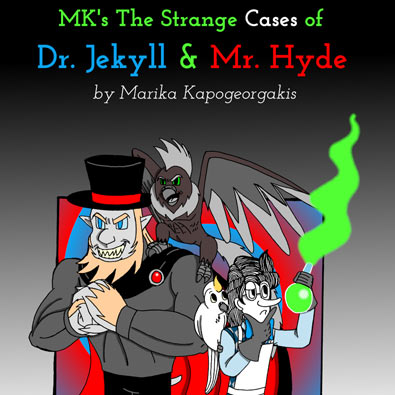 Nothing is going right for poor Doctor Jekyll… Whatever can go wrong for the good doctor DOES. He gets drenched in mud, loses a high status job, and then loses his fiancée to another man. But he's a nice guy, he holds none of that against anyone, all he wants to do is improve society and to better the lives of those around him. So of course he starts with himself… But the potion he drinks doesn't quite work that way. The vicious monster Mister Hyde is released ravening onto the streets of London!
This is a hilarious and touching take on the classic Robert Louis Stevenson story of Doctor Jekyll and Mister Hyde. It really is a very well written piece of work! I found it a real page turner and laughed out loud many times. The art is heavily stylised and a bit rough at times, but it is consistent and the characters stay on-model. It's drawn with a pen and then digitally coloured.

I was thinking this comic was featured before. My memory is failing me XD Congrats! I've been following this series for a long time.

This day just keeps getting better ;)

Plus, I could not have done it without the support of all my readers, patrons, friends and family. Thanks. You made it worth the work.

I am so speechless. I can even begin to describe how honoured I am to be featured on this prestige site. The Duck was the first webcomic hosting site I ever saw.