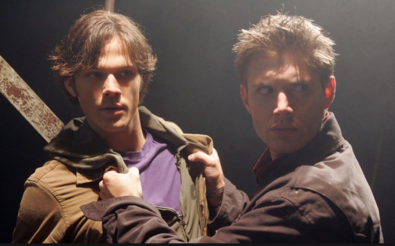 
The show Supernatural is ending its run at season 15, which starts up sometime this year.

It's a really impressive length of time for a live action TV show - but when I heard about the finale, I had the same sort of vague surprise - the same feeling I get whenever the Simpsons shows up in the news:

“wait…that show's still on the air?”

This is not to diss the Simpsons…or Supernatural. Actually after hearing the news about The monster-hunting Winchester brothers heading to the finish line, I went in and watched a couple of episodes and found the main cast was still doing a great job, and the production looked and felt the way I thought the series should. I remember thinking they were going off the rails when they began introducing more CGI into the mix; everything started looking and feeling wrong. I may have left the show shortly after that.

But the few new shows I watched looked great, and had the same tone that it did at its best.

I noticed the magic, monsters, and artifact names were getting really strange and obscure. It worked, but it must be difficult to keep doing new (or somewhat new) things after so much time and so many episodes.

Webcomics are a different animal of course; there are probably comics out there that have been running for over ten years that are still nowhere near even the middle of the story (Bottomless Waitress has been going about six years and are still on the same day as when the series started - I'm sure there are comics with more years behind them that are still in the same couple hours, story-wise. That's the nature of webcomic time, even if the page count is big).

What are you favorite long runners, on TV, in print, or in webcomics? Are there some that can go on forever? Some that should have ended by now?

Dragon Ball is a classic long runner. As is Hunter X Hunter and number of others.

@AmeliaP - thank you! I appreciate that. Yeah, there are plenty of manga/anime that have been really long runners! Interesting take on the appeal of webcomics too! I like it! @cdmalcolm - yeah, I liked the sound of Charmed...never could get into it but it had a pretty long run I think!

@EssayBee - yeah, those superhero characters will continue on forever I'd imagine! @bravo - a good idea to break things down into digestible pieces indeed! Pretty cool to have an expanded universe in mind like that!

@Jason Moon - Yeah, Swan Song was good...I think that was the original planned ending for the series but it continued WAY past it! @damehelsing - It has been good. Even though I drifted away a few years ago, I do consider myself a fan of the series. I think I went up to about season 10 or so? A nice long TV run even at 10. Even more impressive to go to 15!

That is interesting. Hmmm..... SVU, Monday night Raw and south park. Webcomics? I don’t know. That’s a hard one. What about reboots of old shows that lasted a few years? I know this don’t count but Charmed was one of my favs and I’m glad they rebooted it.

First off, great article, as always! "What are you favorite long runners, on TV, in print, or in webcomics?" I LOVE long stories. I just can't read a 50-page story and feel attached to the characters. I need time to get used to them. One of my favorite comics is a 10 year series: 100 Bullets. Ghost in the Shell is one of my favorite animated series, and I've been following the movies and TV show since 1995. However, I don't like cape books and their infinite loop of parallel universes to tell the same Batman or Spider-man story. About webcomics, I see them in a totally different experience: To me, webcomics depict the evolution of authors and their authentic expression. It's unique and beautiful to see the progress and the process, diving into a creator's mind. No publisher or story length are controlling a webcomic. It's just the author and the reader immersed in a dialogue.

The Robofemoids saga is one long story though each major arc is it's own stand alone comic. Attack of.. Battle of ... Tales of SIG all flow into one another even if they are separate titles. And there's still Revenge of, Conquest of, (a part of Tales of SIG) and Return of to come. And there's prequels too telling how stuff got as fouled up as it is. It's all one HUGE canvas but I broke it into smaller pieces for easier consumption and my own sanity.

Some on-going series are great. Many of the mainstream comics continue to have great story arcs, and I can't imagine Batman, Superman, Spidey, really ever ending. As long as people like the characters and writers have ideas to explore, I don't see why they'd have to end. Of course, such an approach also pretty much guarantees some awful story arcs where folks will say things should've ended, but that's the nature of the never-ending beast. On the flip side, it's pretty much a guarantee that there will be more great stories at some point. That said, both of my comics I started with an idea of the overall story I wanted to tell, but I consistently come across character bits and side-stories to explore. So, even though Fusion hits the 10-year mark this year, there's still a lot of stuff to get through to realize that "overall story."

I love Supernatural so much and I was so sad to hear it was coming to an end but I honestly think it's about time. It ran its course and the cast has been lovely. I grew up watching Supernatural so it almost felt like Sam and Dean were family to me. Tbh Supernatural is the only show I've really watched for so long.

I'm sad to see it end. I've been watching Supernatural since the very beginning. "Swan Song" will always be the best episode ever in my humble opinion.

@used books - Good point about the standalone stories being better for long runners. Very true! Webcomics work a bit differently I think, with one page at a time coming out. A single myth-arc that doesn't resolve for close to a decade is going to annoy people, at least as far as commercial properties. Good idea saving the status-quo-crumbling for the end, if it comes to that! Having an idea of what would 'break' your story and avoiding that, or saving it for the end, is important

@MOrgan - haha, exactly. That's a good point about long runners having different creators. A lot of the really long running books, comics or shows do that. Sometimes they have to, especially in the world of comics where they run for over 50 years. But that can keep it fresh when it works. I think the Hardy Boys books had multiple writers under one name, which is how they did a bajillion books.

@jerrie - I like how you started your series with a main premise about jay starting an underground fight club, but then had it go off in a hundred different stories and tons of characters. Your comic could go on forever with that set up - I mean, look at soap operas on TV! They ran for decades and decades!

@oz - that's the advantage a TV version would have! They'd only have to build the diner once, not on every panel like you have to! @bravo - and still valiant as ever, I assume? Did he ever update his haircut?

WM has been going on for 9 years now I think, and we've just managed to cover two months of in-story time. XD Favourite long runners... pretty much all of it here on DD: Used Book, Putrid Meat (it ended :( ), Awfully Decent Fellows (it ended :( ) and so on. On TV I'd say one of the long runners I'd loved was GoT but the ending ruined it for me.

Btw, I have a series finale planned for my long-runner, and working directly toward that changes the whole writing process. It's extra fun and exciting now. It's removing all restraint and letting the status quo crumble into nothingness.

(Used Books becomes a teenager in February. They grow up so fast.)

I like long-running shows that actually allow passage of time and significant development, but only if the episodes are standalone. Long runners are kind of tedious if the ongoing plot takes precedence over the episode plot. Series without a strong overarching canon have the best staying power. (Star Trek, MacGyver, Murder She Wrote, most animated series)

As much as I enjoy Detective Conan for the standalone episode plots, the story plot really needs to get somewhere. I think they are over 700 episodes in. And a year hasn't passed (otherwise Conan would be back to his original age and then some).

The Katzenjammer Kids ran from 1897-2006 (although not with the same creator), so clearly anyone doing a comic for less than double-digits is a slacker. ;-)

My comics are like soaps...they don't end! Only story arcs end...never the series!

Prince Valiant started in 1937. One continuous story. I'd like to get into Dr. Who again.

Hahaha! I'm just waiting for Bottomless Waitress the series so I can copy the art from the TV show XD