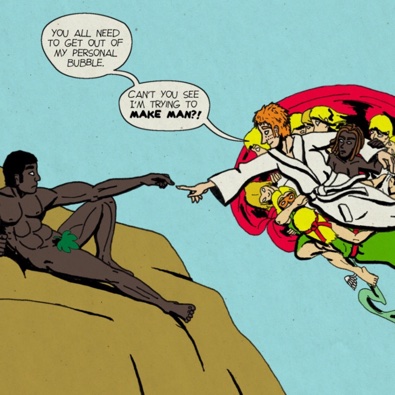 In the Networking and Community Project section on the forums, Albino Ginger made a call to artists that are interested in having one of their characters appear as an angel in the Holy Bible Albino Ginger Version Comic. Sign-ups and requests can be made on the forums at this link:

Hello all you true believers! I have been trying to think of other ways to interact with my readers, and I have thought of something that I think could be fun. If any of you guys would like to design an angel or two to be seen in later chapters, of my comic. go ahead and send me some ideas! I will give you credit in the comments of whatever pages your angel shows up as well as a link to your comic if you have one.

Guidlines:
feel free to ignore these guidelines if you want. They are just the ones I use.
in my comic, angels are neither male nor female. (they don’t have sex organs) the majority of them have blond hair and blue eyes, (but they are not limited to those colors.)

The different kinds of Angels:
First Sphere: (least common form of angels)
1)Cherubim:
appearance: they have 4 faces. one of a man, one of an ox, one of a lion and one of an eagle. they have 4 wings covered with eyes, a lions body, and ox’s feet
duties: guard the throne of God along with other stuff…

2)Seraphim:
appearance: fiery 6-winged beings
duties: Caretakers of God’s throne and shouts praise in his presence. “Holy, Holy,Holy is the Lord of hosts! the whole earth is full of his Glory!”

3)Thrones:
appearance: they look like older men, and have small wings on feet
duties: Listen to the will of God and present the prayers of man.

Second Sphere (more common than First Sphere angels but less common than Third Sphere angels)
1)Powers / Authorities:
appearance: A pair of big wings on back. they wear full armor and helmet, with defensive and offensive weapons. (for example shields and spears or chains.)
duties: 1: Supervise the movements of heavenly bodies.
2: Warrior angels
3: Oversee the distribution of power among humankind.
4: cast and chain evil spirits to detention places.

2) Dominions / Lordships:
appearance: Divinely beautiful beings with a pair of big feathered wings, on there backs. they often have orbs of light fastened to the heads of there scepters or on the pommel of a sword.
duties:
regulate the duties of lower angels.

Third Sphere (most common form of angels)
1) Principalities / Rulers
appearance: they have small wings on feet, and wear a crown and carry a scepter
duties: 1: guide and protect nations or groups of people.
2: carry out orders given by user angels
3: bequeath blessings.

2) Angels
appearance: they have small wings on feet.
duties: 1: messengers to humanity.
2: guardian angels
3: all other menial tasks.

3) Cherubs / Putti
appearance: a baby with wings
duties: I don’t know. fly around coming mischief? any image of Heaven would be incomplete without them….

as I said, feel free to ignore these guidelines.

@Albino Ginger- no problem! Any project involving community involvement is perfect for the front page.

Thanks for promoting this Kawiidakusei! you are awesome!

Great idea Bo. It would be cool to see Eeve as an angel