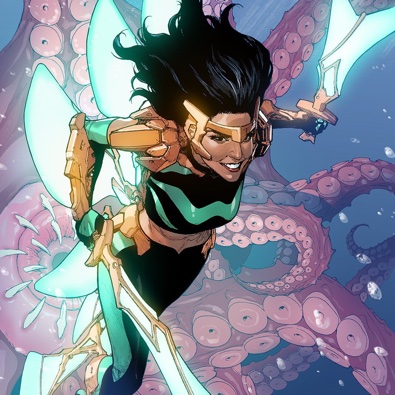 It was announced that the newest addition to Marvel’s War of the Realms: New Agents of Atlas #1 will include Wave, a character from the Philippines. This is not the first time a Filipino character has been unveiled in the Marvel universe, the Triumph Division was the first group of superheroes that originated from that part of the world.

In the first released photo, she is shown in front of an octopus and is holding sword-like weapons that might be kampilans, which are single edged, long swords that are traditional weapons in the Philippines.

Cultural representation of different ethnic groups from a variety of backgrounds is inspiring for children and creates a positive role model for comic fans from all over the world. Having a female character from the Philippines is a pretty exciting development!

Very cool,I'm an eigth filipino.Their ancient swords and axes were very unique.The pummels of their swords would have artful engravings that represented charms whether it was bad luck or an aid in battle.

Yay! My people are being represented!