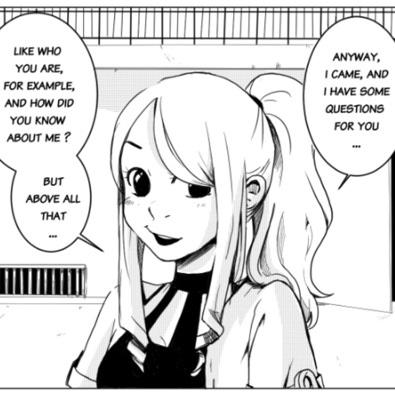 Shinji Desmedi is a shy, introverted student unlike his very social sister and loving father. He has a difficult time looking up once he lets his gaze down at school. One day he is approached by a girl who misreads his inability to engage in a conversation as a rejection and he is ostracized by his peers once again. He tries to take out his energy in a healthy way, but instead dwells in all of the negative words and put downs. That night Shinji walks in on his dad outraged over a young man who he believes is going to do something terrible one day. The next day at school, Shinji encounters the young man at his school campus even though he is not a student. Should Shinji be concerned about this unknown visitor?

Generation Y is drawn in a black and white manga style. It is meant to be read from right to left in order for the dialogue to make sense.

Find out more about the mysterious boy that crossed Shinji’s path and read Generation Y by Ayaluna, rated E!

Whoa, Ayaluna! That is an update marathon treat!!

Thank you so much for the featuring!! (｡´∀｀)ﾉ To thank Theduckwebcomics.com and my readers i'll try to upload everydays for some weeks!

I read some of this on Comic Fury! I’m curious as to where it goes