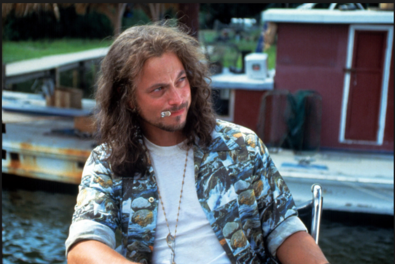 There was an episode of the show ‘Supernatural’ a few years back where Dean met with the literal personification of Death. This Creature - one of the most powerful, if not THE most powerful, would take human form once in awhile (or when some ancient agreement demanded it). He would sometimes visit Earth for some Chicago deep dish pizza.

The slightest touch, even accidental, from Death would kill a person. Maybe even being in his general vicinity would do it; if I remember right the pizzeria had some deceased patrons, slumped over their tables. And there he was, impossibly powerful Death, in the form of a wryly funny, middle aged man, sitting there eating deep dish pizza. A pretty quirky idea, but what made the scene work, what really sold it, was the Dean character. The character, usually very confident and glib and used to the unusual, was played as quite nervous and…kind of in awe of the being sitting across from him.

It was an excellent job, and I could not have bought in to the whole thing without that performance.

When something extraordinary…or someONE extraordinary, is in front of us in a story, it's sometimes the performance of the normie with them that really sells the amazing character, or the scene, and maybe even the entire story.

I remember reading some director or producer say about the classic movie Rain Man, that although Dustin Hoffman's portrayal of Raymond was excellent, it was Tom Cruise that was the real MVP. He made it work. He made you believe.

I agree with that. And with the importance of Doctor Watson. And Agent Scully. And Black Widow, the regular person who is nearly killed by a savage Hulk in the first Avengers movie. And Lieutenant Dan in Forrest Gump. Heck, I'll even give a shout out to Han Solo in the original Star Wars, whose world weariness and cynicism made the whole thing ring true.

Here's to the normies! Have you ever used one in your stories? Who are your favorites?


Yours on the regular,

I'm in awe how good Supernatural still is in its 14th year. I really love that show.

I've heard this called the "grounding character ". The one who grounds all the others. The foil for all the heroic types. All too often it's a sidekick like Jimmy Olsen. If the hero is super serious, he'll be a joker. Think the character actor versus the leading man. At least one of the heroic trio has to be this and often provide conflict because he wants to get married. The classic movies for this would be 1930s adventure movies and the best being "Gunga Din" with Cary Grant, Victor McLaughlin and Douglas Fairbanks jr. Fairbanks is the normal guy.

Supernatural is such a fun show! I really enjoyed the demon named Lilith who would possess the body of a little girl. The child actress really sold the performance.

Dramas need "straight men" too. The character outside the situation who can comment on it and bring it to Earth.

I agree with you. I think you need the contrast of the typical to the extra to appreciate the distance between, maybe to underscore what that distance is: Oh so great, or maybe not much at all.

Damn good point there. A "Normal" person does make the extraordinary one more extraordinary. Like Ryuko Matoi is awesome in Kill La Kill but it's really Mako that makes he so much cooler than she would be otherwise. And of course Jimmy Olsen with Superman.