QUACKCAST 451 - Fans who criticise are are good fans 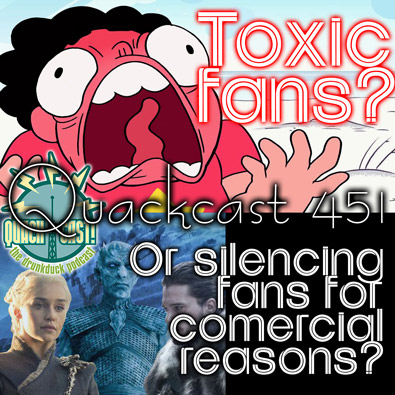 “Toxic fans” is a bit of a catch cry now and that has seemed to turn into the idea that any fan who is critical of something or doesn't like it isn't a “true fan”, fans must should love everything. I find this a dangerously silly notion and one clearly driven by business interests with only a limited relationship to reality. It's quite similar to the idea that you're “either for us or against us”, the twisted idea of “patriotism” that says you must agree with and love everything your country and your leader does no matter what or you're a traitor.

The truth is that trolls have always been a minority force. They exist and they are nasty, often sexist, racist pigs, but they're certainly not fans and don't characterise real critical voices. Using the existence of trolls to justify shutting down criticism is silly. In reference to this Tantz and Banes bring up big budget mass media productions like Star Wars, Game of Thrones and Ghost Busters, but I was thinking along more general lines: Good fans are people that love something but also care enough about it to think about storylines, characters and deeper aspects of that thing (it doesn't matter what it is), to have constructive opinions or to be upset when they see their characters misused etc.

People who are not fans and who really shouldn't get involved in the discussion are the “it's not for you” or “it's just a movie” crowd. Everyone knows it's not real life, and a creative product is “for” anyone that cares enough about it to consume it and form an opinion.

As Vickie Boutwell said “the opposite of love isn't hate, it's apathy”.

Fans who care are the best fans: it's these people who become creators in their own right while others simply consume. The greatest minds in pop-culture all started out as critical, thinking, fans. Name any successful, big series in any format (TV, movies, books, comics, games), and you're likely to uncover a fan that cared enough to let their opinions of their fandom show and then get in and have a go for themselves. By encouraging criticism and involvement we encourage creativity, by shutting that down all we get are consumers -which gives you a clue where that pressure is mainly coming from. ;)

This week Gunwallace has given us the theme to Ripping off King Arthur: We’re all preparing for the big event here with this theme. It’s a weird mixture of a Rocky theme, fantasy epic, and 8 bit video game music… as if were were about to see a pixelated, medieval fantasy themed version of Mortal Kombat! The fight showdown to end all fight showdowns!

Another Problem is alot of directors and companies lately take all things they consider negative, even constructive criticism, as the person being a hater. It's not all of them granted, the Sonic movie guys went "Aight, everyone hates his design, let's delay the movie to fix it." (Which if the leaked design is real, they succeeded.). That's probably the biggest problem.

It was also stated that fans who criticize are still fans, I agree. If someone just says to me; "Your work sucks! Give it up." I ignore that because its not genuine criticism its just trash-talk. But if someone points out where he/she feels I'm failing, I listen and take what they say into consideration. Furthermore, If a fan says "Good work! I love it." I'm grateful but I'm more responsive to praise that points out where and why its good. That way I know what to keep doing. Funny thing, those who explain the reasons for what they like about my work are also usually the constructive critics as well.

Maybe you missed some points I made below, or misunderstood them: I am merely talking from a fellow fan's point of view (the issue will be different for creators and studios). As a fan engaging in nerdy discussions, I have seen externally motivated rage pop up more frequently. Here, I primarily meant to clarify (which Oz agreed on below) that the distinction between this rage and criticism is not imagined or imprinted in me via propaganda. Further, I was merely talking about not accepting this hate as criticism. That doesn't mean I want anyone to "dictate" anything. (And even as a creator, I am free to accept or reject statements about my work, without having to be blamed of restricting free speech. As a studio, I obviously also need to sell a product.) Further, I did not say anything about the external cause of this hate or whether/how we should try to defuse or prevent it.

Thanks! Enjoyed the Ripping Off King Arthur theme song!

As a content creator, you don't get to dictate to your audience how they voice their displeasure with you. It may not be eloquent, and it is often impolite. While I wouldn't personally recommend going with "feminazis ruin Star Wars" if you're trying to make a serious point (at least not without a lot of explanatory context), if enough people are echoing that sentiment and it gains traction, then it is incumbent upon you to understand where it's coming from. You need to understand your audience. You didn't intend for this reaction to occur, and yet it did. Investigating and understanding where they're coming from does not mean you're granting them their premise. And yes, these people do by and large want to save their beloved franchises. You can read their blogs, check out their Youtube channels and forums. That is the sentiment I get from them. They feel left behind, they feel hurt, they feel deeply apprehensive. I think Oz touched on that a bit, and I agree with him on that.

I'd draw the opposite conclusion: that calling out toxicity can be used to shut up valid criticism is no reason not to call it out when it occurs and damages discourse. Again, it's not about ad hominems at all. There's simply no way comments like "feminazis ruin Star Wars" can become part of some meaningful, productive discourse. To say that such a comment is toxic is to say that it's not an aesthetic evaluation of Star Wars, but misplaced hate, which just clogs up that discourse. I also disagree with your saying that by identifying it as toxic "you piss off a lot of people who, toxic or no, want to see you turn things around and succeed". You can't meaningfully "fix" (e.g.) Star Wars based on comments like that. Toxic fans don't want to see movies succeed, they want them to conform to their unreasonable, hateful views. Accordingly, toxic comments do not point out genuine flaws. I certainly don't want Star Wars to be "fixed" according to those toxic standards.

Well, you're right. Calling out toxicity doesn't necessarily have to be a cynical ploy to shut up valid criticism... but in practice that is what it's been used for and, being ad hominem, it is superfluous to the discussion at any rate. So what is the benefit of even going there? You piss off a lot of people who, toxic or no, want to see you turn things around and succeed. You're pitting your audience against each other. And you're potentially passing on good advice. I don't see the utility of the concept, at all.

My talking about legitimacy here has nothing to do with motives or ad hominems (except for my first comment below, which was just an example of toxic discourse). Certainly, it's not vital for distinguishing criticism from toxicity - toxic fans in the relevant sense are simply those that make toxic comments. I wouldn't get too hung up on the word "legitimate", if that's bothering you. All I meant to get at was the distinction between criticism and hate. What was important to me here was simply to deny the groundless generalizations that (a) speaking out against toxicity is a means to shut up critics (I enjoy critical discussions and think a critical stance is important) and (b) the notion that there is such a thing as "toxic fans" is just commercial propaganda.

Can toxic fans make legitimate criticism? Can well-meaning people contribute to a climate of toxicity? The concept of toxic fandom is ad hominem; the backgrounds and motives of the critics shouldn't matter. Are their critiques valid or are they invalid?

@Oz: Thanks for the clarification. The description above reads like the very idea of "toxic fans" is wrong, and/or as if it was such a marginal phenomenon that no one should complain about it. I disagree on both accounts - I see toxicity as a significant part of the public debate about franchises today. I am obviously neither on any of the companies' payroll, nor am I a "new fan" courted by their PR strategies (proudly reading comics, watching Star Wars, Disney movies and She-Ra since the 80s ;p), nor would I consider myself a complete noob in media discussions. Rather, what we need to do here is distinguish between legitimate criticism and toxicity. To take the obvious example, comicsgate has been a clearly toxic part of the discourse about comics online, and we can see similar "movements" in popular culture today. Not to say I have found the ideal recipe to deal with it, but I'd rather this weren't painted as company propaganda, with people like me simply drinking their Kool-Aid.

@Abt Nihil: of course not. Was the a serious question? I was talking about the social media policies and marketing that drives the behaviour of those who're part of the media production of these things. Ordinary people who take up the cry do so for their own reasons but often they also simply adopt the language they've heard do do it ;)

It's actually been proven quite a few times. Games/Movies/Shows that do things that make certain individuals mad, and do nothing to change because they don't care what they think, tend to do well. Media that tries to cater to these people.......tend to fail. Because these people don't Buy the game/Buy the ticket to it/don't watch it.

@Kou the Mad - Agreed! And it may be that these "new fans" being catered to do not even exist. Hm. I feel a Newspost coming on...

Plus, you're El Cid, so I'd be disappointed if you didn't say something provocative! ;p

It is always a bad idea to insult or alienate the old fanbase for new ones, because with the latter there's a very real (And often-time high.) chance it will horribly backfire.

Feminazis did ruin Star Wars. I can say that because I was never a fan. ;p

So, do I understand correctly: If I call so-called fans who complain about "feminazis" ruining Star Wars/Marvel/She-Ra/etc. toxic, I have "comercial" reasons?

BTW commercial has two "m"s unless you intend to emulate the poor speling & gammer am de interwebs.