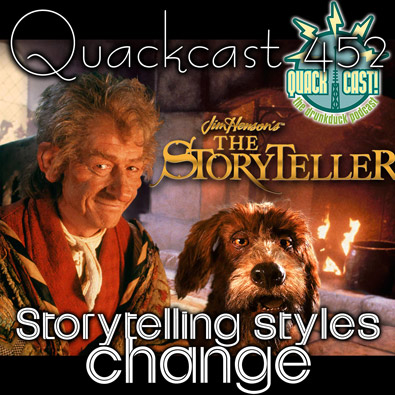 Storytelling styles change over time for various reasons: fashion, audience expectations, competition for audience attention due to increased choice and availability of media, technological limitations and abilities, and culture. We chat about the reasons for the changes and how styles have changed.

Technology is the easiest factor to point to: with the rise of Netflix offering binge watching more and more TV series turned to long story arcs and minimised the episodic aspects. This in turn influenced other media because audiences were primed to expect longer story arcs: comics, book series, games and even movies like the Marvel Universe have a focus on long story arcs over the course of several films.
For digital comics Scott McCloud talked about the idea of “infinite canvas” because comics on a screen are not limited by the area OF the screen but can move outside of it. No one really picked that up seriously, there were experiments made but nothing really took till Webtoons started to force creators to use their vertical scrolling format (for mobile phones), this in turn influenced a new style of storytelling: an entire chapter released as one continuous scroll made up of many connected single panels. You can listen to us chat about that on our Patreon only video :) https://www.patreon.com/DrunkDuck

Although I think the TRUE genesis of the continuous scrolling chapter release was actually the sites that pirate and release manga titles. These were massively popular well before Webtoons came about. They'd release full manga issues with every page in one scrolling stream rather than single panels. It worked very well, whether reading it on a phone or full computer, despite the need to zoom in when using smaller screens (a single panel column is a silly, arbitrary limitation).

Another huge influence for storytelling styles has been choice: there is now a huge range of easily accessible media available so stories need to be able to grab their audience quickly and keep them, or they just move on to the next thing. This goes for all formats (movies, books etc). This means that most stories start off rather fast now, often dropping you in the action and quickly introducing characters, as opposed to the much slower pace of older styles.
Listen to the full cast to find out more!

This week Gunwallace has given us the theme to The Jacket Comic: Wiry, punk, gritty, shiny and cool, this one jangles in on lyrical chords, sounding indie-rock with an almost Arabian flavour at times as the strings howl and echo up and down the scales. A rocky tune it for the coolest jacket in the world.