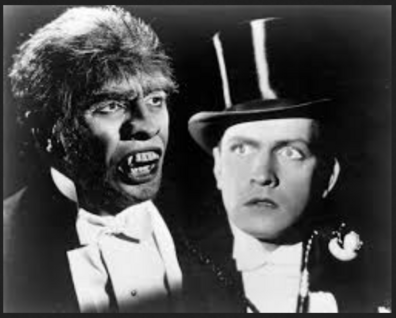 Last time we talked about characters who are not what they seem. Folks who are introduced one way but are revealed to have a secret nature, or hidden depths, or a hidden agenda.

Another type of “hidden side” I enjoy is a little less universal, but can still be seen in a lot of fiction.

It's that “Hyde” inside us. The “animal” that exists within the civilized human, which is made up of our lizard brain qualities, our survival instincts, that gets to appear as a separate being in fiction.

Or in a different school of thought, it's the “dark impulses” within a human being…or even “the dark side” if one wants to think of it that way (though I think that might be going into somewhat different territory).

Anyway, I knew the “Dr. Jekyll and Mr. Hyde” story from cultural osmosis, probably, but I also remember reading the hardcover book which told the story of one of the movie versions - it was the 1931 version starring Fredric March. The apelike appearance of Mr. Hyde stuck in my memory from childhood - but it wasn't until last week that I actually saw that movie for the first time.

It was phenomenal, and incredibly risque and fast-paced for the time period, too. Which is kind of important to showing the animal-like impulses of Hyde and the kind of life he seeks out while he's in that persona. I saw an even earlier version, a silent film, and it was really good, too. I guess it's just a riveting story!

I may have seen the Sylvester and Tweety version of the story first, though (so good. Unforgettable). 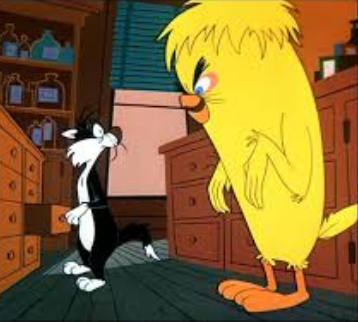 The Jekyll and Hyde story exists elsewhere, too - maybe in earlier stories, but definitely later in movies about the Wolfman, and even later in comics like The Hulk. The Hulk is very much about the repressed rage and fury that can be buried deep down within a regular person.

In any case, it's a fascinating area of study, and wonderful territory for fiction!

A more sophisticated look at this exists in Dexter, Breaking Bad, and Better Call Saul, where we can see powerful impulses pitted against higher ideals within the main characters of those shows.

p.s. I love the story, presumably true, about the original Jekyll and Hyde novel written by Robert Louis Stevenson. When his wife read the book, she was so horrified she threw the manuscript in the fire, and Stevenson had to rewrite the whole thing.

What's your favorite Jekyll and Hyde type story or character?

Cool topic Banes! I like the closet crazy characters. I feel like Mirai Nikki (Future Diary) did a good job at playing around with that. You knew his little girlfriend was nuts but it isn't until later you find out the true extent of it lol

I remember the Sylvester and Tweety Version XD but I like the Veggietales version better (Dr Jiggle and Mr. Sly). I really like the Hulk, particularly the version found in Avengers EMH, where Bruce Banner acts as Hulk’s conscience. There were literally scenes where Hulk would imagine Bruce and they’d argue about something. I think another good example of this trope in with the character Venom. I guess I’ve somewhat incorporated this theme into my own story, with Evan’s repressed fears and memories manifesting themselves in the form of him responding violently without even thinking, and him barely being aware of his actions because they’re almost completely subconscious. This was fun to do and will be cool to see him learn to control his strange abilities more.

Fight Club is a movie I think kind of taps into this subject matter (Haven't read the novel yet). SPOILER ALERT: Tyler Durden, the main character's split presona, is a projection of the main character's repressed rage and urge for antagonism against society, that the main character always wanted to embrace. But he couldn't let himself do so because of social pressures and the obligations that came with his line of work, so he unknowingly creates a second version of himself to indulge him into embracing these emotions and run with them. So in a Sub Rosa kind of way Tyler Durden is the Mr Hyde to the main character's Dr Jekyll.

I'm very fascinated by the "monster within you" theme, so much that at times I believe that the antagonists of any story always represents the "dark side" of the antagonist, in one way or another. However, the idea in Dr. Jeckill and Mr. Hide that Hide is "the beast inside" is ambiguous because this way Hide becomes what Freud called "the repressed", those natural instincts that are in us but that we have to repress to lead a normal social life. The Lord of the Flies is also about this, and also many other stories, however in reality when we see very violent societies this happens because extreme violence is taught and developed on purpose in people. For example I did read an article about Sparta's education system that likened it to the way kid soldiers are brought up in modern day, it isn't a natural disposition. So there is the question of how much we have all a monster within us (the repressed) and how much it is BS due to societies that were very strict about e.g. sexual codes.

It's also a story about chemical dependence and addiction. So the craving and what you do to satisfy the addiction is Hyde.