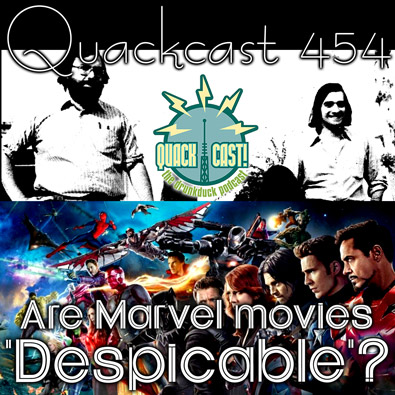 
This week we look at the famous quote by respected film director Martin Scorsese that “Marvel movies aren't Cinema” and also the quote by fellow director Francis Ford Coppola that Marvel films are “despicable”. We try and look at the proper context of these remarks outside of the twitter garbage and social media outrage to see if either had any point or whether they're way off the mark and deserving of criticism.

We've linked to the video where you can hear the full quote from Scorsese in its proper context. It was an industry focused discussion about his latest project “The Irishman” and the challenges involved in getting it produced and promoted. He was asked about the future of movie-making and the platforms for movies and narrative cinematic storytelling. In the conversation, as an aside he mentioned what he thought of as “cinema”: something that is a defined, encapsulated, curated narrative experience is what he seemed to mean, as opposed to a long form TV series where the audience chooses how many episodes they watch at a time (his example), so the experience of the overall story isn't as fully guided by the creator. It was in exactly THIS context that he mentioned Marvel films, thinking of them more as an experience, like a “theme park”- NOT that they are facile and lessor things than a traditional movie, more that it's not really a contained story that's offered but more of an immersive world that you visit. I don't entirely agree but I can see his viewpoint and it's valid.

We are all emotionally connected and invested in the Marvel films so we mistakenly took his remarks too personally and out of context, turning it into a very stupid old vs young argument that it never was. It seems it was in the spirit of this that Francis Ford Coppola waded in and offered his rhetorical firebrand defence to his good friend, using a value judgement and actually calling Marvel films “despicable”. This was again blown up into something huge and headline grabbing. It really was a stupid thing to say, but in the context of defending a friend that was wrongly attacked it becomes more forgiveable, especially since its obviously just rhetoric and not a considered, thought out, personal viewpoint. We can't forget that both men know cinema inside and out and helped create the modern blockbuster film industry of which Marvel is a part. They started out with Lucas and Spielberg. They don't deserve to be ignored, the targets of childish Ad hominems, or casually dismissed because they're not big fans of the same things we are.

We on the Quackcast are huge fans of the Marvel films and all forms of storytelling.


This week Gunwallace has given us the theme to Inner Enemy: Time races ever onward. As the piano keys play note after note, step by inevitable step we move closer and closer to uncovering the mystery at the heart of this world… it teases at the edges like the disturbing, haunting background melodies in this track.

@ozoneocean It's true that Scorsese's comment wasn't a judgment of value, but then different genres have different structures and styles because they have different esthetics, so the two things can't be completely independent.

Most of you guys are still taking Scorses's comment as a value judgement, haha! I tried to explain that it wasn't :(

I think the films are pretty despicable, but then I used to be a reader of the comics and enjoyed the experience of seeing the development of sequential art. Those characters and stories in the films are the very definition of "in name only", and most of the people whose interest was piqued by the films end up kind of cruelly appropriating everything related. And of course there's the fact that these films are basically just trying to sell you a product in whatever way they think you should digest it. They're not trying to make a piece of cinematic art. They are advertising a product to you that they wish to make desirable.

I think they are upset because Marvel & DC stories have been refined by decades of story telling in comic Form. Hollywood writers left so producers went to stories written decades ago & forged it to fit today’s audience. So now that comicbooks got into the major league of filming, they see that as a threat because it’s making money over the films they consider Cinema. They don’t like superhero movies or action films for that matter. The Movies are a point of view to bring fantasy to life. It is an action based film. For them to say that about Marvel movies is also saying the same thing to all action type films. Why not just call it like it is for all action types & not single out Marvel? Now what if all the marvel movies were made as Drama films, or thrillers? Would they have said the same thing? Everyone is not going to like the same type of film as them; but to say that a marvel movie is not cinematic? that’s ridiculous.

Scorsese's remark about the Marvel movies being like theme parks made sense to me. There are basically two levels a movie affects you on. The surface level "Bang! Pow! Zoom!" of a lot of action and special effects, and the emotional/intellectual level where you have to pay attention to the dialogue and little details to get the most out of it. It's easy to see the Marvel movies as the former because, well, what do you see in the commercials advertising them? Bam! Pow! Zoom! ;-)

Whatever they said it's just their point of view, but the majority of the population of the world will remain the fans of Marvel contents ...isn't it ?

There is a deeper problem about this. When we look at artistic products, one generally expect them to have some sort of artistic value, which however is often in the eye of the beholder. Generally if someone says that the stuff I like is crap, I will take it as a personal offence because it implies that I'm at some level a bit stupid, but then on the other hand if one can never say that movie X or comic Y is crap then there is no meaning in saying that X or Y are good either.

Coppola started his career about a decade before Spielberg and Lucas. He started out with Roger Corman in the 1960s. Both Lucas and Spielberg started around 1970.