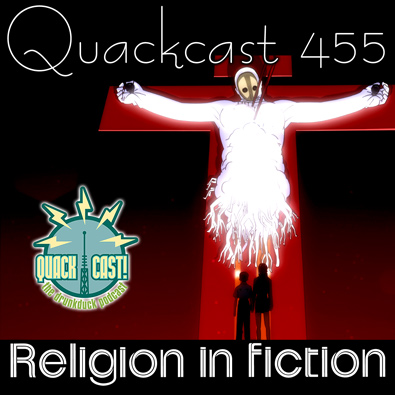 We're talking about how religion is portrayed in fiction and a bit about WHY. This was a surprisingly fascinating topic. I came up with the idea while watching the old 2000s SciFi series Andromeda: one of the alien characters there is sort of a space Buddhist, and I felt like that was a pretty common thing in American TV Scifi, so I wondered about what other kinds of religious tropes exist in contemporary fiction, fantasy and other SciFi worlds.

It turns out that there are many approaches, from fully developing a carefully constructed set of religions like in Dune to the typical anime fantasy approach which is just to steal some superficial imagery from Catholicism and remix it, and everything in between!

We had a really fun and interesting chat about all the different approaches to religions in fiction! Give it a listen :)
What are some of the best examples you've seen?

This week Gunwallace has given us the theme to Animal Town Confidential - A very fun track. Come on down to the country, mind the chickens! The one makes you feel happy, positive and welcome. Acoustic guitars and analogue sounds bring in a flood of warm sunshine and light.

A really good example is Nok Nok from Pathfinder: Kingdmaker to use a strange example at that. Nok Nok is a Goblin, which in Pathfinder are pretty much Always Chaotic Evil, which Nok Nok also is. And as a (Mostly) traditional Goblin, he worships Lumashtu......whose an Evil God. His questline with you (Who unlike most companions, actually doesn't matter what alignment you are, I think he sticks around no matter what in that department.) is him trying to become the 5th Goblin hero (Basically he wants to ascend to be a Demi-God or Minor Deity.). I won't go into any more details for spoilers reasons, but to me that he was a VERY interesting take on that front.

Two quotes that sum up my views on religion in fiction nicely: "This story is not and never was meant to challenge anyone's faith; however, if one's faith can be shaken by stories in a humorous novel, one may have a bit more praying to do." (Christopher Moore, Lamb: The Gospel According to Biff, Christ's Childhood Pal) And, perhaps even better: "God is a comedian playing to an audience that is afraid to laugh." (H.L. Mencken)

I agree with Kou—and yes I’m a Christian so I really appreciate when my beliefs are treated with respect. I think some decent examples are the Bruce/Evan almighty movies. While silly, they still seem to have some reverence for God and all he does. The Prince of Egypt is a classic good example of faith in fiction as well, and I always really loved the Character Nightcrawler from the X-Men. In my own comics, Kat, Evan and their father are Christians, (with Evan having a somewhat warped view of the faith due to being raised very differently) and Kairo is an agnostic. I really enjoy their interactions with him, very respectful, yet there is a clear distinction between them, particularly Kat and Kairo—Kat is naive yes, but full of hope for the future because of her faith, whereas Kai has become somewhat jaded over the years and had no real hope to begin with, so her innocence and warmth proves to be very refreshing for him.

Thanks for all those comments guys! Some really interesting points there. I liked reading that, especially how it applies to your own comics. I think we'll have to read these out on the next Quackcast :D

Basically what I'm saying it, actually research the religion you plan on using in your story, and to incorporate it into a way that isn't derivative (Any JRPG where you fight God (Shin Megami Tensei (Like holy shit has the mainline series become predictable.) or the Church being evil (Final Fantasy 10, Breath of Fire 2, etc.).) as it will risk being way too predictable, to do so respectfully so as to not offend anyone, and for crap's sake don't just rehash straw man arguments (Again, like Family Guy.) if you plan to criticize a religion, as that just comes off as lazy and in extreme cases even bigoted.

My story actively talks about it......mostly cause the cast all KNOW their deities are real and exist. When it comes to other settings (Like anime.) as a Christian, I have no problem with other criticizing religion (Mine included) if done so fairly and doesn't resort/spam Straw Men coughFamilyGuycough. Anime in particular seems to have great difficulty understanding most religions, and does so in a way so often that It's become incredibly predictable, which hurts the plot as a result (This applies to JRPGs as well, in fact it does so more so. (It's more shocking when a Church in a JRPG ISN'T evil/false, which is the result of several years of rehasing the trope.).).

As for handling it in my comics...one of the fan-favorite characters in Fusion is X-Pletive, the superhero powered by swearing, and who just happens to be a pastor when he's not in costume. So, I guess my take on religion in fiction is you can have fun with it and even poke fun at it and still be perfectly respectful of it. Or you can be overly serious with it and end up with it becoming an inadvertently hilarious Chick Tract.

One of my favorite books is "Lamb: The Gospel According to Biff, Christ's Childhood Pal" by Christopher Moore (https://www.goodreads.com/book/show/28881.Lamb). It manages to mix gut-busting hilarity with some really profound character bits, and shows that you can be completely irreverent while not losing reverence to the subject matter. Lamb is big on character and humanizing figures through humor and an appreciation of just how crazy some of the Bible stories are. On the flip side (being concept over character), one of the zaniest sci-fi takes on religion I've read is Ryu Mitsuse's "Ten Billion Days and One Hundred Billion Nights" (https://www.goodreads.com/book/show/10307466-ten-billion-days-and-one-hundred-billion-nights). What do I mean? Well, to quote one reviewer: "The centerpiece of the book -- a cyborg Buddha battling Jesus with masers and other energy weapons -- is genus." The book can be a bit of a slog at times, but it does have some really cool ideas.

Some of my characters have religious leanings, but since none of them are evangelists, and it's not a central story theme, it doesn't come up much. Just personal observances. Tristan is the most pious. He is sometimes found in church and prays when times are rough. Seiko is agnostic. Yuki's family are mostly (hypocritical) protestants. I avoid projecting my opinions (political, religious, or what have you) on characters, but they would't be realistic if they didn't have their own.

Darn it - we should've had a Gregorian Chant for the theme song this week!

I usually try to be religion neutral and friendly in my comics. For instance, I am open to which faith a character practices and they are open about their practice, but that's it.