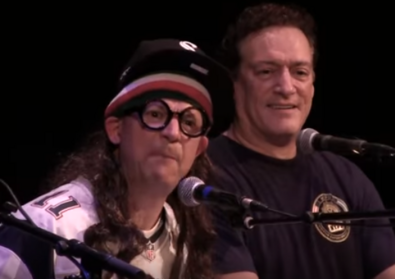 Last week I talked about structure in webcomics, and asked you about how you make your longer-form comics digestible by new readers as well as ongoing readers.

But what about other alternate ways to present a webcomic?

Most of the ones I've read are roughly the dimensions of a printed comic page; I did one issue with double-long pages that were still split into two individual pages.

I've mentioned before a page way back in the comic “Busty Solar” that showed certain actions happening with one character, and then when you scrolled down, you saw the dirt under the ground, then blackness, then finally the other star of the series, who was down in the sewers, and a panel with her. Really cool, and impossible to do the same way in a print comic.

I'm okay with a longer-than normal webcomic page, but I must admit, if the page is too wordy or not totally absorbing, I'll get restless and have to scroll down to see how much content is on that page. I guess I prefer a standard-sized page usually.

I also prefer it in my own comic, for the sake of the readers. I don't like to give them too much to deal with at once. The exception will be when there's minimal dialogue and I don't want to keep people waiting for the next page, if there's not a complete scene or joke or emotional beat happening on the single page.

This one is more theoretical for me - I haven't read as many webcomics as I could have so I haven't seen as many “alternative” formats. What do you think of playing around with the standard page size in your webcomics? Do you do it? Do you like it when the comics you read do it? What about splitting a comic into individual “issues” that are posted as separate comics? Any other unusual webcomics formats that appeal to you?

My pet hate with long form comics is tiny pages or single panel updates. It's as if the creator cut up a regular print sized page into three or four updates. It makes for too many page loads and slows things down too much. That said, I get why this is done as usually it's on comics with very detailed painted art and it means they can make more regular but smaller updates.

My pages aren’t very big or super small, and I do it in chapter format. Really long chapters, heh. I think both scrolling and regular pages have their advantages, but it might be more work to do a scroll comic in some ways

Thank you @Bravo, I'm glad you like my long pages. Sometimes I know I'm a bit exaggerated about its size, but I tend to show more panels than speech bubbles, so it's necessary to use that extra space. As Banes said, this long format enables the use of some cool vertical effects, which I use from time to time just to prove myself ;)

I make comics for print, and if there's room for more than one page I'll just post the whole chapter all at once. That way I can deliver to readers both on and off line.

I used to do things in a format specifically for later printing, but as that's become less of a priority, I've started to do things in various sizes. Currently I'm working on comics in strips of generally about three or four panels (generally a maximum of five) for side work, because I think keeping it concise and in such a limited format can be inspiring and challenge me to improve at my work. But I also work in larger sizes for certain comics. Thankfully, on the net, you can choose most any format and people will adjust and read on your terms if they like what you're doing.

Thanks for the shout-out. I also make comics for the web exclusively. While I start out with an empty white page in the regular print friendly size i almost always tend to extend the pages for various reasons. Often i need to add those two or three panels extra to get a better punchline or cliffhanger. It is a nice freedom to have.

I'm making webcomics not print comics, if a sequence demands more panels in this update, I'll keep going until it's done, an arbitrary cut-off for artificial length considerations makes no sense. I never have a problem with scrolling down to read more of something that interests me.

I draw my pages on computer paper, so the dimensions are pretty set. (I also get them printed in a manga sized format. So I keep them standard for printing.) I dunno about pages, but I have noticed comic strips work better vertically arranged online due to scrolling. I never like a horizontal scroll for anything.

I love Avart's scrolling pages. Considering I do most of my comic reading on my phone scrolling isn't an issue because a page doesn't fit and you scroll anyway. That said, the most I've done is longer pages. OMG, gone from letter to legal sized paper!