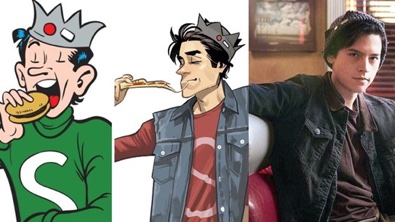 I decided to give the first episode of Riverdale chance after seeing lots of its merchandise advertised in the local Hot Topic and several teenagers recommending it. If anyone is late to the party (as I was), Riverdale is a series based off of the 1939 Archie Comics. It shares many of the original characters such as Archie, Betty, Veronica, Reggie, and Josie and the Pussycats.

The twist that makes it a completely different series from the one from the earlier generation is that now there is a mysterious disappearance in Riverdale; Archie is having a fling with a teacher; Jughead is a lot smarter and knows more that he should. In fact, if the characters did not share the same names, come from the same hometown, or resemble semi-similar likeness to their original characters, this show would not be associated with the comic at all.

It is like the updated the story for young people of today where the characters are dealing with more grown up issues with much series challenges.

One character group, Josie and Pussycats, the fictional rock band that goes to Archie’s high school, was a reminder of how the original series did not take itself too seriously and was originally a more light hearted show.

Imagine, seventy years after its original release, the Archie series is being reintroduced and rewritten for new generations to grow up with and enjoy.

I have mixed feelings. On one hand, the writing behind it is creative and fresh, but on the other hand, it is just not Archie to me. I am usually open to alternate universes and different adaptation, but well... you can't like everything and I'm afraid this series is a case of me not liking it. Don't get me wrong. I think the idea of an edgier and a little more serious version of the Archies can work, but I find it went too dark for me.

The guy who plays Jughead is really good. I like the Betty actress too. I think they rush the writing, though. The story is all over the place. Some cool moments here and there...I’ve watched it all based on affection for the comic characters.

I haven't see any chapter but I have a lot of curiosity because I was a huge fan of Archie Comics. But I want to avoid comparing both products because as you say, the only familiar things are the names.

Riverdale struck me as a script for a completely different project and the screenwriter, just went through and changed character names to Archie characters and called it a day.

When do Josie and the Pussycats get their spin-off and go into space?