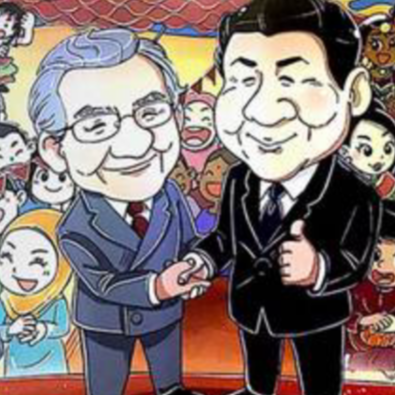 A comic book in Malaysia titled “Road and Belt Initiative for Win-Winism” by Hew Kuan Yau has been banned by the Malaysian government last week under the Printing Presses and Publication Act. It is being seized after being accused of potentially spreading communist and socialist ideals and it could be confusing for anyone reading it. The comic takes a pro-communist stance while trying to create support for the communist struggle according to a statement by the Home Ministry.

The ban started when unapproved copies of the comic were distributed at a high school last week on October 17. It quickly went viral, while setting off debates on its content. Now anyone who is caught printing, importing, publishing, selling or distributing copies of the comic are subject to fines or three years in prison.

There were concerns in how the comic depicted minority groups in Western China’s border towns that could cause dissent over Malaysia’s multi-ethnic and multi-religious communities.

What a disgusting stunt. But then, Malaysia and the countries around it have a lot of problems that they need to deal with. Censorship is just one major part they need to get past. Just idiocy.