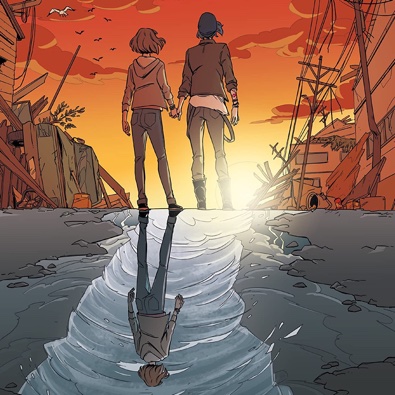 With more time spent at home, I have been able to dive into some of my favorite past-times that I used to do when I was middle school aged. One of them being playing video games. Growing up, Squaresoft and the Final Fantasy video game series completely shaped my identity and world for a few crucial years in adolescence, so when I decided to look for new games to play on the Xbox store last week, Life is Strange (2015) came up as a suggestion and I spent a good amount of time playing through the whole game and I have no regrets except that this game did not come out sooner in my life. Interestingly enough, I just learned (through extensive google searches for this article) that there was a graphic novel related to the series released after the video game.

The game starts out from the perspective of the protagonist Max. She is an indie-styled photography student who has just moved back to her hometown in Portland after moving to Seatle, WA, for three years. It is only a typical day at school when Max suddenly discovers she has super powers—the ability to turn back time and change events where they made a big difference.

The game is based on choices and small choices you make at the start of the game can have dire consequences later down the road. It is one of the most detailed oriented video games as well as self-aware since the characters have their own unique voices and personalities. I honestly felt myself growing attached to certain characters and caring about their well-being more than usual (it also helps that we are currently living in self-isolated bubbles, so social interaction with other human beings is limited).

There is so much I want to praise about this game. The graphics are done in such high quality, the entire game feels like it is one giant cut-scene while using the best graphics. The voice actors are spot on and really capture the personality of the character. Last but not least, the music is awesome in a sense that I listen to half of the songs they used in the real world on my Pandora account. In one scene, Max is hanging out in her friend’s bedroom and there was an old school CD Player Boom Box (you know the ones we used to have in the mid-1990s) and they give you the choice to play either “Angus & Julia Stone” or “Bright Eyes” and I nearly lost my mind.

Honestly, this game was a 100% bonafide genuine video game, which I love. It had some dark story line plots and reflected on a junkyard as one of its key settings, which was actually quite beautiful. It is a video game that I would play several times, making brand new decisions and using what I learned before to change the future outcome of the characters.

The game were the Finnish God Ukko gave some hipster college girl Time Powers that'd make Dio Brando call Hax. I assume she got them from Ukko given the time powers didn't affect that one deer, Finnish Pantheton (Suomenusko) is symbolized by a deer.

Loved it. Magical realism is my favorite genre. I love that low-key fantasy in the real world stuff. Another good one is Beyond: Two Souls

Like Avart I love Final Fantasy too! :3 I agree, 8 is so amazing. I'm excited to play the FF7 Remake that is coming out in a couple days. Pick up your copies on April 10th!

Always a big fan of Squaresoft and Enix games. Final Fantasy 8 is one of my favorites.