Writing a Love Letter to Life 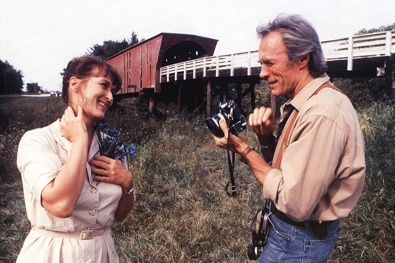 It has taken me twenty-five years to watch the entire film of “Bridges of Madison County” starring Meryl Streep and Clint Eastwood. It tells the story of an Italian War bride living in rural Iowa who meets the Worldly National Geographic photographer who has come to her small town to photograph the bridges close to her farm house. The film varies from the book because the narrative is told from the housewife, Francesca (Streep), instead of through the photographer’s (Eastwood) perspective.

The feelings and emotions I felt while watching were that of an emotional heart break and I felt like part of me died a little by the end of the film. But how did author, Robert James Waller, craft such a beautiful love story that was about a romance that only happens very rarely in many lifetimes.

The story had many layers and was more than a romance story, it was a story about having to decide between our realities and our dreams and making choices that we eventually regret—and that is how to write a love letter to life.

Love story? This woman cheated on her husband, not because he was a bad man who beat her or neglected her, she cheated on her husband because she was bored. I honestly think women's views of stories like this is slanted. Because if a man ever said that he thought a story where a man in WW2 fell through time to 18th century scotland and fell in love with a sexy highlander woman and left her family in WW2 for her women would be up in arms. Unless you make the character who leaves their spouse in WW2 a woman and the sexy highlander a man and call it "Outlander".

Wow, really nicely said! I never did watch it but you sold me on it. Twenty five years is a slow watch, though; I hope it wasn't a rental! Blockbuster is closed down, but someone might come after you for the late fee!