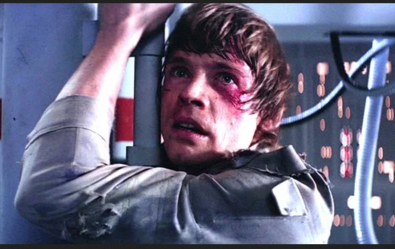 I've talked many times about story structure. Even with a structural approach, there are a lot of questions to be answered, struggles to be had, and hard thinking to be done to make a story work.

One big moment that I like thinking about early in the writing is the “All is Lost” moment. That's when the Protagonist is usually at their lowest, and when it seems that…well, that all is lost!

I'm about to reach that moment in my current Typical Strange story, and I've been looking forward to it for a very long time!

These are memorable moments in stories. Luke learning that Vader is his father, and losing his hand. The victim in a slasher movie realizing their friends are dead and they're on their own against the killer. The sports team seemingly about to lose…and the coach or leader seemingly selling them out (see Dodgeball). The couple that was meant to be break up and seem irreconcilable. In Infinity War, Thanos had his All is Lost when he had to throw someone off a cliff. Okay, I don't want to spoil that one too much. But Thanos was the Protagonist of that movie, even though he's the villain. It was his journey, complete with the All is Lost moment!

It's a powerful moment, and if you know it ahead of time, at least roughly, it can help define the story before you get too deep in to writing, hopefully avoiding too extensive a rewrite. It requires knowing what needs to happen to apparently destroy the character's hopes and dreams, and leads to another great moment we call the “Dark Night of the Soul.”

That's where you sometimes see a depressed hero wandering the streets while a melancholy song plays.

It usually happens around 3/4 of the way through a story. Roughly.

It's where Mentor characters go to die as well.

We can relate to that moment and the aftermath in life, too. It's one of the most powerful things about stories - maybe the whole reason for stories to exist, is to allow us to experience those devastating moments in a “safe” way, and be inspired to keep fighting when we get knocked down badly in life.

Do you think of that moment before you tell a story? For me, I usually do but sometimes leave it to be figured out later. It's a crucially important one. The one I mentioned from The Empire Strikes Back is iconic, probably my favorite.

What are your favorite “All is Lost” moments?

I wish more media wasn't openly predictable. It IS possible and it's lovely when it's not.

You are right about the idea of hiding it!

Nice use of a photo of an Arm is Lost moment.

@MOrgan - For sure! This is the time for wringing maximum emotion! @dpat57 - Yup. I'm a big fan! @ozoneocean - I get that. With all the interest in structure I have and the love of talking about it, I think the next part of the job is to HIDE it, so the reader/viewer isn't thinking about that stuff. They're just invested in the characters and what's going on. @bravo - Nice!

In Attack of the Robofemoids, when Denisov is standing there watching the truck with Sasha drive away.

I often to annoyed at this period in a story... Just because I'm always waiting for it to happen to a character and ai wonder what form if will take 😁 I'll try and think of my fave

These moments echo Blake Synder's beat sheet (of course) and they're a good rough guide roadmap to follow. Lots of beat sheet analysis available on https://savethecat.com/

I was trying to think of a scene from another author, but my mind instead went to one of my own. In "The Case of the Missing M" F.Organ is trying to find her missing cousin and after playing detective talking to a bunch of people has failed to find him and is doubting her abilities and worried he's dead. As a writer it's fun because I get to "twist the knife" and milk the scene for all it's emotions. Sure there's probably better scenes from other writers, but I didn't write them. ;-)