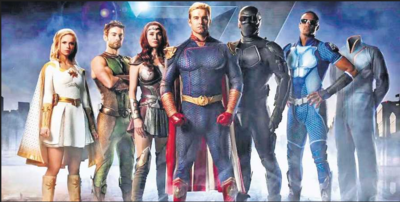 don't i know you people from somewhere?


I realize it's not true of everyone, but there is a good chunk of various fandoms who are not happy with the condition of their favorite franchises these days. We've talked about the Star Wars of it all quite a few times.

Jon Favreau, now working at Lucasfilm on The Mandalorian, recently came out with a statement very positive about the importance of remembering the hardcore fanbase who have kept the franchise alive over the decades. That that core has to be respected, even as they try to bring in new audiences too. Many beaten-down Star Wars fans have expressed much appreciation for those words; they've gone a long time with nothing positive being directed at them. It's a good sign.

By and large, it's the hardcore fanbases that are the unhappy ones, whether we're talking about Star Wars, Star Trek, Doctor Who, and Marvel and DC comics and/or movies.

While many Star Trek fans have given up on the Franchise after the expectation-subverting Discovery and Picard (and now the cartoon), many are expressing great love for The Orville, which better captures the spirit of The Next Generation and Voyager series. When is that damn show coming back, anyway??

While feelings are mixed on the DC Universe that began with Man of Steel, the dark and brooding Superman, the “expies” of the Justice League on ‘The Boys’ are intriguingly dark, and it works a lot better because the classic icons are not being subverted or being portrayed out of character. It's new characters, who strongly call to mind those icons, who are the dark and twisted versions of those icons. That works!

We'll see what happens going forward. But it looks like in many cases, the official franchises are missing the mark to one degree or another. And the expies (the somewhat-similar copies) are capturing something that the frustrated fandoms want to see.

For the creator-types, writers and artists like many creators here on The Duck, this is good news, and an eye opener.

The companies that own these characters generally keep an iron grip on their rights. If you were ever lucky enough to make any money or even get a level of notice from writing about their characters or worlds, they will be ready to swoop in and shut you down. Some owners are more lenient than others, but you would still be creating-or not-at their pleasure.

This is nothing against fan fiction. I say go for it and have fun as long as you're allowed to.

But to write your OWN characters, in your OWN worlds, that capture the spirit and essence of those things you love? That's perfectly fine.

And in an era where many of us think our beloved fiction and modern myths are in the worst of hands these days, there's a good chance your take could be better than the pros'. You can capture the spirit of what you love and do it in your own way. And it's yours!

If you're looking for examples of spiritual successors done right, they seem to be all over the place in gaming spheres these days... stuff like Freedom Planet and Bloodstained are great examples of "sequel game that's not actually a sequel game".

Indeed, look at star wars it's been crippled by attempts to ape the old and move on at the same time. I could say a lot about star trek... Hahahahahaha! I have to admit I largely stopped reading Marvel and DC comics because they just kept rehashing thing and retconning into absurdity.

Every group at some point feels that they are being pushed aside because eventually they do have to get out of the way for something new. That doesn't always mean that the new thing is better, but eventually everything will change regardless. I love the old comics, movies and TV, but I also open my mind to what the new creators are trying g to accomplish. I am more pit off by stories that never end or characters that never evolve because some huge company is cashing in on them. Creatively to me, that's hugely boring. This is why I have gravitated to web comics. I've the new ideas I'm seeing here. New worlds to explore. Trying to hold on to a nostalgic idea of creative medium seems antithetical to me. Creation by its very nature promotes growth and change. I love superheroes, but DC and Marvel's core characters are noticeably long in the tooth and increasingly less and less interesting with each passing day.

The Boys just needs to die in a fire. That show and the original comic is just a massive hate boner for superheroes, Americans, and Christianity. It was written by a "mature" and "grown-up" edgelord who didn't grow up with superheroes. Garth Ennis grew up with edgy British war comics so he has zero understanding of what superheroes are all about. He's not even good at being an edgelord, he's Mark Millar levels of terrible. I kinda disagree with Hushicho about the continuity thing, but a good way to help that is to make the multi-part stories a freaking special occasion. Make the normal comics done in ones while remembering the continuity and you will have no trouble picking up new readers.

With a lot of the "official" stuff too, these days, it's basically just officially-stamped fanfiction. It's fans just like us, who happen to have been chosen to write the company-endorsed line. That's it. That's the only real distinction. They got lucky, and the obsession with "canon" these days makes people fixate on it. Anyone who's read superhero comics for long enough, though, knows you really have to cherry-pick your continuity! But it is worth considering, additionally, because the reader or viewer also plays a crucially important part in interpreting the work and participating in the story. They have to meet the creator halfway.

I do think it's very good to make one's own take on something, though it's important to remember two special words: "creatively distinct". And another two: "plausible deniability"! That said, there are also plenty of characters and stories that have just been abandoned forever by Marvel and DC, to say nothing of others. They're not in a really great place right now, and they have themselves to blame. That said, however, The Boys can go drown itself. It's an abomination and absolutely the worst approach to superheroes I've ever seen in any form. At least Watchmen had a point, as much as I hated it. The Boys is just a particularly onerous instance of utterly missing the point of superheroes in the first place and getting the genre completely wrong, not undermining or examining it, but completely failing to even present it properly. And this is what happens so much, especially these days. People just miss the point utterly and don't even give the audience what they'd want from something.

It is funny, looking back where one was and where on is now creatively. Back in the day and not to long ago I would have been trying to emulate those video game, movie and cartoon franchises I always loved. Now, I seem to have figured out my own original stories to tell, that might still have a cord of those old franchises, but they seem to ultimately resemble something I can call my own. My enthusiasm for stories and entertainment, in the mainstream, seems to have run dry over the last decade, and been increasigly replaced with this ever growing enthusiasm to create and share my own instead. If it all will be to anyone's satisfaction other then my own only time and effort will tell, all I know is that I now, after months of consideration and scribbling, have come up with the founding story premise to five new webcomic series, adding to the two I already got going, that I'm ready to focus my time and most if not all of my creative efforts to.