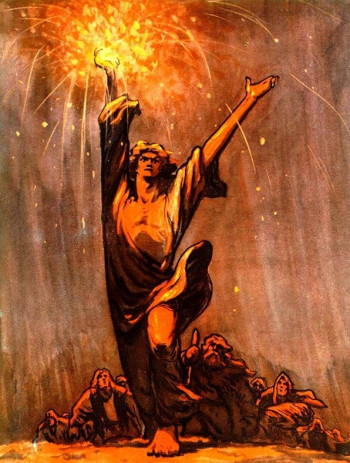 I couldn't have been older than 11 when I read The Flaming Heart of Danko by Maxim Gorky. And boy, did it cut me with the finest of fine glass. Even now thinking about the short story hurts somewhere deep in my soul.

And yet, I love it so, despite the pain it gave me when I read it. It is a short story, and I've linked it so if you're up for a tough, unhappy but powerful tale, go ahead and read it before coming back to this article.

Up until then, I was used to the hero rising up from among the people, leading them to victory, and then receiving recognition, and love, and acceptance by those the hero helped.

This is not how Danko's story goes.

In a nutshell (spoilers if you intend to read it, skip to the paragraph not in italics- though there is discussion of it below, so be warned), a group of people have been harrowed and chased by a much stronger foe into a forest of darkness and poison. If they stay there, they will die. If they backtrack, they will die at the hands of their pursuers to the last one. So they stay there in that impasse, unsure of what to do and lamenting their fate, until Danko, and young man stands up and rallies them all to keep on going to cross the forest, even though it looks too big and impossible to cross to the other side. So fervent and determined is he, that people actively ask him to lead them. And he does.

He leads the way through the terrible forest. The deeper they go the more they lose their heart and faith, with whispers of futility, of Danko leading them to their doom, of being unable to see because it's pitch black this deep in the forest. So at some point they stop and they turn on Danko, accusing him of killing them, of being a traitor, and consider turning back and offer their foes their freedom in turn for their lives.

Danko suddenly sees them not as humans, but as wild animals full of fear- but animals he loves dearly and wants to save, because he knows they are his people and this is just their fear talking. So much is his fervor, that the flame of his heart makes his eyes glow, and the people pull back (they'd been about to lynch him). Danko then says that he'll lead them all the way to the other side of the forest at all costs, and he tears open his chest, pulling out his flaming heart.

The heart casts the brightest light the people had ever seen, illuminating the forest and chasing away all fear from their minds. They rally around him again, and he starts leading them on again, holding his heart up high and clutching at his chest the entire way.

Sure enough, now that they were moving quickly, they saw the edge of the forest, and everyone rushed ahead past Danko into the sun, rejoicing at the beautiful green meadow and flowers and trees that were welcoming them to a new, prosperous life.

Danko stumbled and fell dead at the edge of the forest, his flaming heart beside him still glowing strong- until a “small, intimidated thing” stomped it out with his foot, until it sparkled no more.


This is, of course, an allegory. It is a subversion, perhaps, of the classic hero's journey and a bitter confrontation with reality. Heroes are often lauded when society needs them, only to be marginalized and stomped down on when the tough work is done, and people can regress to older patterns again.

We have also seen it in personalities that are considered heroic, individuals that led people through some valley of shadow, only to find an ingnominious end once they succeeded.

That is Gorky's genius, and, in my opinion, a masterclass in writing allegories: abstracting a pattern seen in many versions in human history down to its bare bones, and then dressing it up with symbolism that can be universally understood to drive home a message, however bitter, however tough.

For what does the foe chasing a people into a dark forest symbolize? What is the dark forest of poison and lies? Who is Danko, and why does his heart glow in flames? And most importantly, why, even though he's dead, does his flaming heart strike fear into someone who benefitted from it? Why does this someone need to stomp it into the ground until it glows no more?

There is no right or wrong answer. The answer comes by what you match each symbol to, according to your life experiences, your heritage, your culture: Danko could be Moses, Jesus Christ, Siddharta Gautama, Francisco of Assisi, Joan of Arc, Martin Luther King, Park Seo Yang and Kim Jung Dong (google JeJoonWon with their names), Evagoras Palikaridis, Ignaz Semmelweis, Henri Dunant, and so many, many others, famous or not.

The pattern will fit each one, with very little variation. And that is what makes an allegory great.

It is even greater when the emotional impact is such, that it makes you wish you never do whatever it is that is so hurtful, or wrong, or horrid- like stomping on a flaming heart that showed you the way out of a dark, poisoned forest.

First "motive" is actually "meaning " auto correct and me--THAT'S NOT WHAT I WAS SAYING!!!

Well, to each his own Hushicho. Sometimes we're not ready to see the point in stories like that, and if you aren't, you're right to avoid them.

I don't really have much to add to this. I hate stories like that, and to me they come off as pretentious and aren't enjoyable to read.