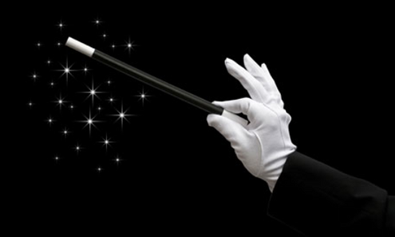 The long-running series Supernatural just came to an end and I enjoyed the last couple episodes. Even though I haven't seen the last few seasons and don't plan to, I knew the series fairly well from its first 6 or 7 years. I could say more about this another time, but for now I wanted to think about a certain element from the overall series - and other series - that caught my interest.

When setting up a fictional world, there are some questions that are left to the imagination and some that demand answers, or will if the series continues long enough, and still others that are quickly answered so's we the audience have SOME kind of answer, and don't have to worry about it any more. That last one, in the parlance of our times, is called “the handwave”.

I appreciate a good handwave in a series. It shows the creators have thought about certain things, and can really set you free to enjoy the thing as a reader/watcher.

There was one brilliant one that I recognized way back in Supernatural's first season. The series is about a family of ghost and monster hunters that travel the U.S., “saving people and hunting things”. The two brothers are all that's left when the series kicks off, and they eat in diners, drink in bars, and sleep in motels.

How do they pay expenses? In the first episode when estranged Sam rejoins his brother to search for their missing Dad, he asks if they're still using fraudulent credit cards. Dean says hey, they keep sending the applications.

The family is adept at staying off the radar, making fake ID's, and so forth. The quick credit card handwave was something I recognized right away and really appreciated, because it was plausible enough to not have to worry about it and enjoy the show.

As the series went on, once in awhile I wondered how all these ghosts and monsters were kept secret. More importantly, I wondered WHY it was kept secret. Earlier, it mattered less. But as the number of monsters and ghosts grew, and the extraordinary events got bigger and bigger, it was something that just had to be accepted.

I think somewhere in there, one of the characters said that people would panic if they knew the truth. That's the Men in Black reasoning. I could accept that, until we met more hunters and other people who were not as heroic as the Winchesters. Why wouldn't they spill the beans? Take in a monster or three and make a fortune from these revelations?

Actually, on one level I can accept it now that I think about it. The show wasn't about that. But it was something I had to consciously tell myself not to think about, as opposed to the excellent handwave with the credit card thing.

Maybe I thought about this because I just got another credit card application/approval sent to me.

Look out, Hellspawn! I'm hitting the road and coming for ya!


Oh, by the way, Merry Christmas, Ducks! Hope you are all doing well out there in this bizarre, upside down year.