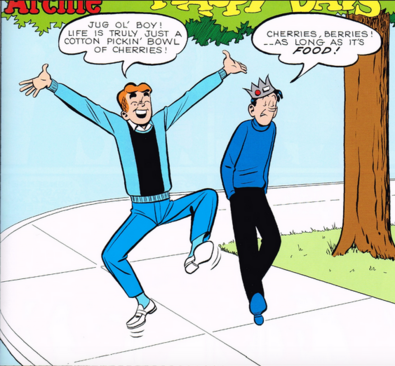 I'm not sure who the first fictional character was that I became attached to. The Cat in the Hat? Superman or Batman? Animal from the Muppets? Oscar the Grouch?

In any case, Jughead Jones was somewhere in that very early group of beloved characters. I liked Archie, and envied his dating life with Betty and Veronica (especially Veronica. Why do I like difficult women so much? Enh…something to explore in another post, I guess. Or in therapy). Moose, Midge and Reggie had an interesting dynamic, too.

But Jughead was always my favorite. My love for the drums was something we had in common. I still remember finding out that Jughead was the drummer in the Archies band. Since I was crazy about the drums, It made me happy.

The other particulars were fun: the love of food and disinterest in girls, the closed eyes, unusual hat and the mysterious “S” on his shirt. They were interesting character traits that set him apart from the rest of the cast. I didn't necessarily share those traits with him, but I think it was his status as the outsider that appealed to me.

He was a weirdo, but often had the most insight into peoples' problems. He was goofy and eccentric, often baffling to his friends, but would often prove to know exactly what he was doing. He seemed lazy and uncaring, and he was very detached compared to the other characters, but was loyal to his friends and was ALWAYS there for them when it really mattered.

He was Archie's best friend, but he also stood apart. He was different. That appealed to me greatly, and still does. 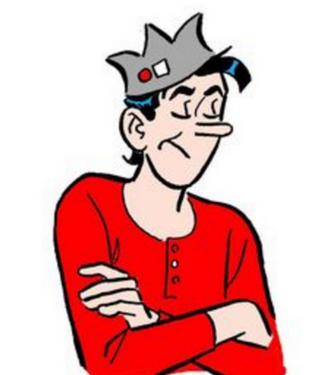 The outsider is often the character we love. You've got yer Han Solo, yer Wolverine, Sheldon Cooper…no females are coming to mind other than Jo from the Facts of Life. Old reference but she was a character I LOVED.

They're the characters who go against the grain. Sadly, they can be easier to appreciate in fiction than in real life. Unless we make an effort…

I consider myself something of an odd duck, if you will. I think a lot of us web comic making artsy types are. It used to be difficult, and sometimes painful, to be the unusual one.

Nowadays, I wouldn't have it any other way. There's nothing I like more than being…a little different. It's the lack of oddness in me that bothers me more these days. When I feel like I'm fitting in too much, or feel a little too “normal”, I get antsy.


I say don't hurt anyone else, or impose your ways on them…but feel free to be an odd Duck! It's a glorious thing, to be a little weird.

And the Patron Saint of that, at least for me, is Forsythe P. Jones.

A tip of the crown to my favorite character of all time!

Always my favorite character. I mostly knew Archie from the cartoon series but always identified with Jughead who always reminded me of a Dobie Gillis/Gilligan character as played by Bob Denver or the classic Shakespeare fool character. Silly, goofy, even crazy but wise.

Peridot from Steven Universe. Sheila from Glow. (Took a moment to consider the handful of western female ensemble casts.)

I've never read Archie comics myself. But nice article and nod to "outsider characters." I can think of quite a lot of female outsiders -- almost all from anime, due to the anime trope/tradition of all-female ensemble casts. Female casts are starting to pick up some in western fiction now (although it's still considered a novelty and often written as such). Unfortunately, if you only have one or two females, she has to be the token woman and can't be anything else.

I've sadly never read Archie comics, but I couldn't agree more with the last part of this post:)

@Avart - Thanks, Avart! I agree. It's often the one that goes against the grain who stands out in a cast. I mean, that kind of thing can be done badly, but when it works, it works great!

@Kou the Mad - Sure! What do you think of that version? The show has kind of lost me, but I like what the actor has done with that 'alternate-reality' Jughead.

Excellent post @banes. Truly one of my favorite characters because as you said, he has many different traits not found in the other cast members.

So should we talk about Riverdale's version of him?