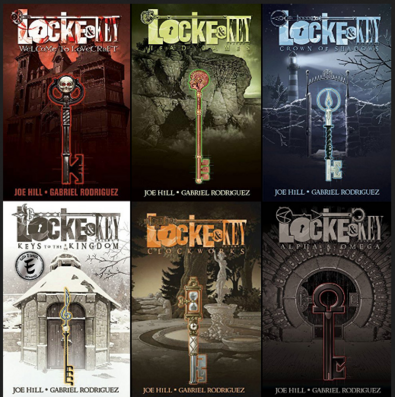 I haven't had a chance to get into the Locke and Key comic series, although I've meant to for a long time - It's been recommended to me a few times, and shows up on lists of “top horror comics”.

Like almost every other “genre comic” that has some success, it's now been adapted to a Netflix series. I see that “October Faction”, another dark fantasy/horror comic, is also a Netflix show. I thought that one was pretty obscure, but the need for more content on streaming services requires constant material!

Anyway, I was surprised to read that Locke and Key has been in development as a TV show for about ten years. It was different people working on it over the years, and for whatever reason it just wasn't coming together. The creators of the comic said that they were excited by the new series, and by the departures it took from the comic, because they stayed true to the essence of the comic.

This is the big thing about adapting other mediums to the screen (or vice versa, I guess). What do you change and what do you keep? Which parts are free to be modernized, altered, emphasized, diminished, or thrown out altogether? It can be a challenge to figure out what really moved me about a particular story or series - forget about trying to figure out what the majority of other fans of the work got out of it!

I have noticed that the Marvel movies that work the best for me are the ones that stick to the bones of the actual comics when they do their adaptations. This applies to origin stories as well as the essence of the characters. When they go too far off, they might be okay movies, but are usually far less enjoyable (and usually less successful with the audience, too).

The Locke and Key creators sound like they were pleased with how the show has stuck with the essence of the show, regardless of the changes that were made in the adaptation.

I'm a bit torn on whether to read it first or watch the show!

I am almost through the season. It is okay but no where near as good as the comics. Worth watching though. Just not as exciting as expected.

Plymayer, a search for Locke and key 2011 brings up several videos. I found out about it by checking the IMDB.

Good review of the comic here: https://www.youtube.com/watch?v=jfaInoLwN6I I've watched some of it but it didn't really grab me yet. I'm about 3 episodes in and it seems pretty tropey and typical mostly, with some reasonably interesting darkness. But dull... nothing special, nothing that really stands out. It's safe. A lot of online fantasy series seem to be like that.

KAM, have heard there was a pilot attempted before. Would love to watch it. Is it on the youtoobes?

The television series is faithful and interesting. Nowhere near as good or as exciting as the comics were. Some minor changes, to make it adaptable to film (not sure if it matters that much). The kids in the comics were more normal average that the "movie" or "television" types in the show. That said all the actors and actresses are doing a great job.

In general, I think a good adaptation should be more concerned with maintaining fidelity to the spirit of the source material than be a literal translation. Different mediums have different strengths, and different readers/viewers see stories/characters through their own personal lenses, which can greatly affect what they take away from stories/characters. A good translation can be something at total odds from how you thought things should be as long as you can clearly understand how and why things were translated the way they are. (Kind of, "Gee. I never really thought about so-and-so as such-and-such a character, but now that I see it here, I can totally see how it makes sense.") In fact, those sorts of expectation-defying interpretations that make sense when you think about them can be exciting. So there's not necessarily a "right" way to adapt, as long as the adapters "get" the source material.

One of the earlier groups to work on it did get a pilot movie filmed in 2011. Youtuber, Ya Boi Zack (Comics Matter) commented that one reason why translating Locke & Key to a TV series is hard is that one of the reasons that people love the comic is the great art which is difficult to duplicate on a TV budget. Years ago a Free Comic Book Day offering from Virgin Comics was this science fiction comic with very underwhelming art on robots and other SF elements. I guessed it was either based on a TV show or they were trying to sell it as a TV show. I think the pilot was in development at the time.